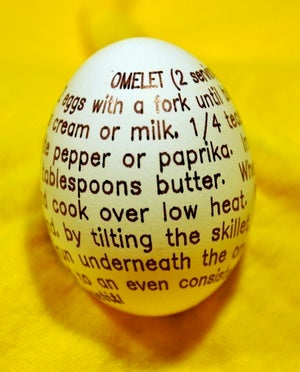 • Pictured: If you’ve invented a robot that can print on eggs, the obvious next step is an egg with an omelet recipe printed on its shell. Boing Boing

• Now’s the time to cook with fiddlehead ferns! Try them blanched in a salad with sweet pomelo and balsamic vinaigrette. Roost

 The Ron Swanson Turkey Burger — a deep-fried turkey leg encased in ground beef and served on a bun, as eloquently outlined by its namesake Parks & Recreation character — does, indeed, exist in reality. Eater

• Fresh ripe strawberries dipped in creamy coconut syrup would be a perfect little treat to make for Mother’s Day. Have Cake Will Travel

 Publish a cookbook, and it’ll wind up with errors in it. Publish the world’s biggest cookbook, and you’ll have a lot of errors — as Modernist Cuisine‘s Nathan Myhrvold is discovering. We assume there’s a volume of errata and addenda in the works. The Gurgling Cod