A Brief History of Food Blogs 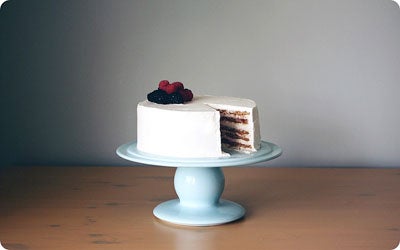 This timeline is a companion to the story How Food Blogging Changed My Life, by Ganda Suthivarakom

To the food bloggers of the world, I raise a glass to toast your impressive, enduring body of work. To those of you considering starting a blog, I say, Jump in! There’s plenty of room for you. Don’t be discouraged if you don’t find your niche right away. It really takes some time to settle into a good rhythm. Don’t believe me? Here’s a really small timeline of food blogging, with some familiar names and links to (what I believe is) their first posts. And leave us a comment to tell us where your blog fits into the timeline.

Be sure to save…

Blogger, a web-based blogging software, is introduced by Pyra Labs.

****This influential, newsy blog was the brainchild of Bruce Cole, now publisher/editor of Edible San Francisco. An archive of his first post no longer exists online; this is one of his earliest available posts.

Julie Powell’s Salon blog may be the first cook-through blog.

Vegetarian Heidi Swanson cooks her way through recipes from her vast collection of cookbooks.

Vegetarian Cooking for Everyone Recipe

“Quite a bit of effort went into this number. Fresh pasta, fresh curry paste, and a few ingredients I rarely use: dried mushrooms, paprika, and turmeric (brought back from Zanzibar quite a while back and then ignored for a couple years).”

Amy Sherman, a cookbook author, developed her own recipes for her early cooking blog.

Though Elise Bauer had been hand-coding her collection of family and friends’ recipes for at least a year before, this is one of her earliest blog format posts.

Pim Techamuanvivit, a Thai ex-pat in San Francisco who speaks French and writes in English, shares her fine dining experiences and cooking techniques.

L’Arpege: I offended the Food God?

“I also wanted to get copper canele molds, because Maxence likes caneles so much and the ones we’ve made using our silicon mold are not as caramelized as the ones you buy in bakeries.”

“Eagle-eye readers will have spotted the mistake pertaining to Patsy’s address. That’s not a Slice typo. Maybe if Newday wasn’t out on Long Island, they’d know that Patsy’s is at 118th and First Ave. Oh well.”

Adam Roberts’s blog brings humor and a refreshing irreverence to the table.

The Birth of an Amateur Icon

“Are you sick of competency?

Of food blogs run by competent people with flawless track records and no history of salmonella?

Are you tired of not having salmonella?

You’ve come to the right place.”

The author of ‘Ono Kine Grindz celebrates the cuisine of his home, Hawaii, a food culture that doesn’t get much attention in print media.

“This is my space to start writing for myself again, rather than for only for professors, advisors, students, grant committees, and the like.”

The Girl Who Ate Everything

“Food and music = happy. Not necessarily together…wouldn’t wanna see a concert while eating or watch singing food but yeah. Fwee.”

Nicky Stich and Oliver Seidel, Munich residents who publish in English, raise the bar on blog aesthetics with their beautiful photography.

“Now after almost 8 months I can surely record that there was life before Arabica beans and life with them. “

Tara O’Brady, a Canadian mother of two, used a point-and-shoot camera when she first started blogging.

Shauna James Ahern is one of the first bloggers to develop recipes for the gluten-intolerant.

“I was starting to think I would never feel well.

Notice that sentence is in the past tense. Because now, I know. And now, I feel much, much better. Gloriously better. Finally.

I have a diagnosis: celiac disease.”

“Welcome to Eater. The paint is just about dry, the banquettes arrived just last night from Budapest (customs is a real bitch), and it looks like the chef is done experimenting with the menu. So, come on in. May we check your coat?”

A cookbook editor at the time, Luisa Weiss tests clipped recipes from her favorite newspaper food sections with the palate of a professional.

“I’m a longtime food blog reader, and would often search the web for blogs writing about the recipes published each week, but to no avail. …why not start a blog that catalogs the recipes tried from the two best (arguably) food sections in the country and see what happens?”

Beloved design blog Apartment Therapy launches The Kitchn to give their posts about food a home of their own.

Conscientious Cook: Promise Academy in Harlem,”Where Food is as Important as Homework”

Lisa Fain’s blog is one of the first regional cuisine niche blogs, celebrating the food of the state she grew up in.

“I love me some refried beans, but here in New York City, it’s impossible to find any that are worth a lick (let alone a bite).”

The blog for the Times‘s food critic makes the most elusive creature in food media more accessible and emphasizes the significance of the blog medium.

Chowhound.com is acquired by CNET, reports the Village Voice. It will eventually become a part of Chow.com.

Matt Armendariz brings an art director’s style to his blog’s photography and design.

“Ladies and gentleman, my name is Matt. I am a Snail Wrangler.”

Deb Perelman’s taste is impeccable and her recipes, both adapted and original, are reliable.

[A photo of dewy cherries, no text.]

Not Eating Out in New York

Cathy Erway, a dedicated locavore, uses a points system to denote how healthy and how green her recipes are.

“Watermelon gazpacho, for instance, is one of my favorites. I imagine that using peach or perhaps crisp white peach to complement the traditional blend of vegetables would also be a bright spin on the already spun-beyond-recognition summer dish.”

Ed Levine brings together some of the food blog world’s biggest names under a single roof: Alaina Browne (A Full Belly), Meg Hourihan (Megnut), Adam Kuban (Slice and A Hamburger Today), and, at launch, Adam Roberts (The Amateur Gourmet).

A Toast from Serious Eats

Already a widely-respected cookbook author, her blog is a continuation of her book signings — a chance to meet and chat with her readers.

“In every city I visited, I met someone I knew from the web – people who’d been baking from my book and posting stories and pictures about the desserts on their blogs and on websites where groups were working their way through the book – and I loved it.”

All strains of cake pop fever can be traced back to Angie Dudley.

My niece bakes too!

“My six year old niece is turning out to be quite the little baker. She was so excited to decorate these for Halloween.”

“I feel like a little kid on her first day of school. What a terrifying thought that is! I have always been shy of crowds, introductions and so on. But I really wanted to start a pastry journal, mostly for myself, to keep me going and to force me to bake everyday.”

“I’ll admit I’m a true butter lover. I’m not one of those people who spend five minutes shellacking a layer of butter as thin as parchment on each slice of bread, working the knife back and forth like a bricklayer with his trowel until the butter is perfectly even. No, I’m a slatherer.”

Ree Drummond’s food community is spun-off from a comment contest on her wildly popular blog, The Pioneer Woman.

The New York Times‘s Diner’s Journal reports that starting in 2011, the James Beard Foundation will get rid of the distinction between online and print journalism, which means that blogs can compete in the same category as magazine articles.

Where does your blog fit into the timeline? Leave a comment below with your own food blog story.

UPDATES: I’ll be updating this with other important food blog dates as we find them. If you have something we should add, send a tip to ganda@saveur.com.

Plus: How Food Blogging Changed My Life »