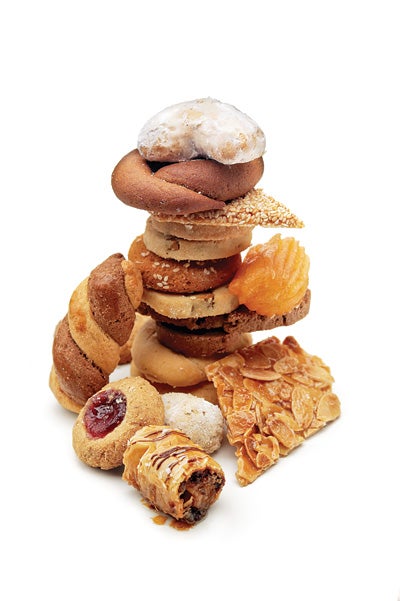 I’ve got the biggest sweet tooth of anyone I know, so when I first walked into the Artopolis bakery in Astoria, a largely Greek neighborhood in Queens, New York, it was love at first sight. There were ten different kinds of baklava alone, some studded with walnuts, pistachios, or coconut, others drizzled with white and dark chocolate. Arrayed in glass cases next to the baklava were all sorts of sweets I hadn’t seen before: honey-drenched fried-dough rounds called toulumbes; folded pastry fritters called diples; soft, ring-shaped biscuits called koulouria that were flavored with orange, sesame, cinnamon, or ouzo; and on and on. Over many visits, I’ve learned a bit about these treats and developed some favorites, such as kritsini, savory twisted breadsticks, traditionally made in Crete, that are flavored with red wine, and moist melomakarona, orange-flavored, honey-dipped cookies that are often served at Greek weddings. And I can never leave without a bag of kourabiedes, the country’s national cookie: crumbly crescent-shaped shortbreads spiked with brandy and covered with confectioners’ sugar.

With time, I’ve gotten to know one of the owners, Regina Katopodis, a Greek-American who grew up in Brooklyn and, as a young woman, lived for 15 years on the Greek island of Ithaca. During her time in Greece, she traveled the country seeking out bakers with the best recipes for traditional desserts. When she moved back to New York in 2001, she brought those recipes with her and spent three months perfecting them with her staff at Artopolis before they opened their doors in 2003.

Katopodis continues to oversee all the baking herself, making sure it’s done with the utmost precision. “When you live in Greece, you can go through all the stages of life in a day: you go to a funeral in the morning, the beach in the afternoon, and then maybe a birthday party at night,” she said. “And these pastries are present at every special moment in life, so they have to be the best.” Prices for the Artopolis bakery’s sweets range from $10 to $15 per pound, plus shipping. Call 718/728-8484 or visit www.artopolis.net.