Tipping the Scales: How To Measure Flour 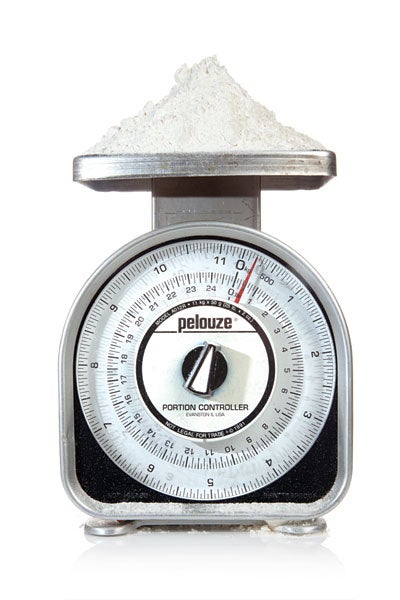 You might have noticed that the bread recipes in our May 2012 issue measure ingredients by weight, a change from the typical recipe style of portioning out only in tablespoons, cups, and other volume measures. As we developed these recipes, we relied heavily on our kitchen scales–digital models that toggle easily between ounces and grams—because accuracy in measuring is never more important than it is when making bread. The only way to be sure you’re getting the same measure every time is by using a scale. I know, because I conducted a little experiment: First, I scooped flour straight from the bag using a cup measure and then weighed the flour; the scale read 5 ½ ounces. When I scooped a cup’s worth from the flour jar we keep on the counter, the scale read 5 ounces. Why the difference? Flour in a bag has been compacted for shipping, and when you pour flour into a storage container, you aerate it slightly. Fact is, neither of those cups I scooped weighed in at what most recipes presume a cup of flour equals: 4 ½ ounces. If you don’t have a scale, here’s how to ensure that your cup contains the right amount of flour: Use a spoon to stir the flour in the container. Drop spoonfuls of flour into a measuring cup until it’s overflowing, then sweep a knife across the rim to make an even surface. This is the way we do it whenever we measure out flour in the saveur kitchen. When I weighed the flour I’d measured in this way, it was 4 ½ ounces on the nose.