An insider's look at the morning meals of Washington, D.C., heavyweights. 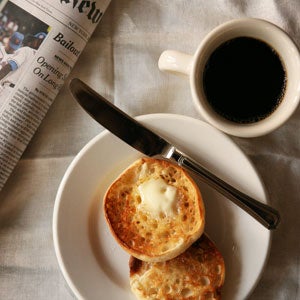 Doctors and mothers have said it for years: breakfast is the most important meal of the day. A simple bowl of cereal in the morning may curb a tendency toward obesity and late-night cravings, boost metabolism, and lower cholesterol levels, but eating breakfast also benefits the brain; studies show that a morning meal enhances memory and cognitive function. As the presidential election looms, SAVEUR set out to discover what the newsmakers and news breakers in and near the Capital Beltway eat each morning. Here, politicians, government figures, and political journalists reveal their preferred early-hour fuel.

**MIKE BARNICLE, political analyst, MSNBC: **”I’m a diner guy. No matter where I am in this country, I manage to find a diner at the start of each day. I’m also a counter guy. Sit right there on a stool where you can see the counterman flipping the eggs, making the omelettes; where you can look the waitress in the eye and place your order without ever having to bother checking a menu. Egg white-ham omelette, period. No toast, no home fries. Large O.J. and a cup of coffee.

“My second favorite place for breakfast is the front seat of my car. There, in one of the last refuges in a nation cluttered with the useless debris of too much information, I can shut off my cell phone and BlackBerry and read the newspaper while sipping a large coffee with cream and three [packets of] Splenda.”

**MARION BARRY, current Ward 8 councilman, former D.C. mayor: **At home, oatmeal, a peach or a pear, and a glass of juice. Over a morning meeting, as a treat, eggs benedict with a side of fruit.

**TOM BROKAW, news anchor, NBC: **”Breakfast varies for me, but the most consistent item is coffee—large and black, or a large cappuccino with skim milk. I’m mostly a granola and yogurt man, except about once a month, when I crave a toasted sesame seed bagel sandwich with two scrambled eggs and two strips of crispy bacon. Occasionally I’ll do french toast with good maple syrup.”

**WALTER CRONKITE, news anchor, CBS: **”My morning breakfast ritual is pretty much the same as it’s always been—4,000 calories or so before swimming the four-by-100-meter race…. Not really, but most days I do enjoy a full, hot breakfast, with an occasional bowl of cold cereal for variety. The one constant in the morning is the time I spend reading through several newspapers—I can’t wait to get to the news.”

JOHN DICKERSON, political writer, Slate.com: “When we have time, my wife and I make a fruit smoothie: bananas, frozen fruit (usually strawberries or blueberries), plain yogurt, protein powder, flaxseed oil, and fish oil. On the weekends we make pancakes with the kids. When I’m on the road, all bets are off. If I’m lucky, I can find a smoothie somewhere, but it’s usually some horrible muffin or muffinlike object.”

JAMES FALLOWS, writer, Atlantic Monthly: “My theory is that breakfast is the meal where people most deeply crave their own native cuisine. Consistent with this theory, one of my goals is to reach the end of this current stint in China—we’re now two years into a planned three-year stay—without ever having to eat the standard Chinese breakfast gruel, called congee…. I am not a morning person, so I don’t have that rearin’-to-go attitude of those who consider a hearty breakfast the start to a productive day. Instead, I have this array of unimaginative and therefore comforting choices, depending on where I am each day.

“On the road in a nice hotel in Asia: A big, cholesterol-rich cheese omelette, with good toasted bread on the side and several liters of coffee (strong, black, a little milk, none of this latte stuff). In theory this might be bad for me, but I’m healthy otherwise, and it keeps me going a long time.

“At home in China, a day of writing ahead: A bowl of raisin bran (which we buy on resupply trips to the U.S.) with milk and several liters of coffee as described above. More coffee to follow through the next few hours at my desk. Sometimes, if we’re out of raisin bran, I’ll have some Chinese bread toasted with peanut butter. See comments above regarding health: I exercise all the time, so I don’t let doctors know what I eat in the morning.

“At home in the U.S.: Some combo of the elements above: sometimes an omelette, sometimes cereal, and of course the beloved bagel-and-cream cheese combo. Sometimes coffee yogurt. All liberally supplied with actual liquid coffee.

“If forced to violate my initial principle—breakfast is when you want the food you’ve known since your earliest days—I would choose to be transplanted to Germany, where I could have black bread and slices of cheese and pickles and cured meat. Plus the coffee.”

**ADRIAN FENTY, mayor, District of Columbia: **Oatmeal and bananas, along with chamomile tea with lots of honey.

**DON GONYEA, White House correspondent, NPR: **”Black coffee. Wheat toast with peanut butter. Yogurt, if I haven’t run out. Election years it gets a bit tricky, with months on the road and frequent 5:00 a.m. gathering times in hotel lobbies, so I travel with my own bag of ground coffee and my own stack of paper filters; that way I can make a decent cup in the hotel room.”

**BILL HEMMER, FOX cohost, America’s Newsroom: **”I hit the same Starbucks every morning. Latte, whole milk. Two bananas. My alarm is set to AM radio. The morning news headlines get my brain going.”

CHRISTOPHER HITCHENS, writer, journalist, pundit: “Old-fashioned Irish oatmeal with salt, plus espresso and two squeezed oranges, which together give me the strength to mount my ROM [Range of Motion] exercise machine for the four-minute workout.”

**DAVID HOROWITZ, conservative writer and activist: **”Bowl of Special K, usually with blueberries, raspberries, or bananas. After that I have a cup of black coffee with a Happy Valley granola bar.”

DAVID IGNATIUS, associate editor and columnist, Washington Post: “At home, I’m a cereal junkie. Same thing every morning: a mix of Great Grains, Fiber One, and Special K with skim milk and strawberries. Healthiest meal I eat all day. When I’m traveling, I indulge in bacon with scrambled eggs and toast. Election season doesn’t change the menu; just adds indigestion.”

HOWARD KURTZ, columnist, Washington Post: “All I can manage is a bowl of Frosted Flakes at my computer.”

SEN. MITCH MCCONNELL, Senate minority leader: Cantaloupe and cereal with blueberries, strawberries, or peaches and a glass of orange juice.

DANA MILBANK, columnist, Washington Post: “I make myself a big latte on my espresso machine, then make some oatmeal or Egg Beaters in the microwave. On weekends, I like to take my four-year-old to Chevy Chase Diner.”

GERRY MULLANY, political writer, New York Times:_ _“I wake up every morning at six and, like the born-and-bred New Yorker that I am, go out to get my coffee and paper. I have some fruit before heading in to work. Once a week I treat myself to a bialy with cream cheese.”

JOHN NICHOLS, political writer, The Nation: “Wherever I wake up on the campaign trail, I look for a local independent coffee shop. I prefer wood floors, regional newspapers, and conversations about the Constitution. (I’ve found that everyone in America has an amendment to propose.) In my hometown of Madison, Wisconsin, I start at Ancora Coffee Roasters, on King Street. I know some people get all excited about eggs and bacon, croissants, and fresh fruit, but I’m not so inclined. I love my mocha, a chair near the window, and discussing an amendment that might yet perfect our young republic.”

**NANCY PELOSI, Speaker of the House of Representatives: **Chocolate ice cream, but a chocolate doughnut will do in a pinch.

DANA PERINO, White House press secretary: “I wake up at 4:15 a.m. and hop out of bed so as not to wake my husband. A little later, he brings me English breakfast tea with honey. I arrive at the White House by 6:15 a.m. After a meeting with the national security advisor, I finally have a chance to eat—usually raisin bran or a whole-wheat English muffin. Then I have a large green tea before the rest of the day gets going.”

BILL PRESS, progressive talk show host, The Bill Press Show: “I’m up at 3:45 and on the radio from 6:00 to 9:00 a.m. Then I’m off to the Eastern Market, the _only _place in Washington to get breakfast. Real men start the day with a ‘Brick’ [a homemade biscuit stuffed with meat, cheese, eggs, and fried potatoes] at the Eastern Market.”

DANA PRIEST, columnist, the_ Washington Post_: “I get up early with a cup of coffee with milk. From there it’s a small bowl of Kashi or other granola, which my kids call ‘cardboard cereal’, with yogurt and fresh fruit—hopefully a crisp apple or plump blueberries.”

DAN RATHER, anchor and managing editor of Dan Rather Reports, former CBS anchor: Oatmeal with blueberries and 1 percent milk, one slice of dry whole-wheat toast, and a glass of milk or tomato juice.

**COKIE ROBERTS, senior news analyst, NPR: **”I’m one of those bad people parents warn you about—I don’t eat breakfast. Since my day sometimes starts as early as 4:30 or 5:00 a.m., I’m starving by 11:30. At that point, if I’m at home, I run to the refrigerator and eat anything I can find. If I’m at the office, I start begging people to go to an early lunch with me.”

JOHN ROBERTS, CNN anchor, American Morning: “I do breakfast in two phases: my 3:00 a.m. breakfast and my post-show chow-down. Most mornings I start with a bowl of healthful cereal. Occasionally, I’ll treat myself to an everything bagel with scallion cream cheese; that and a few cups of coffee get me through the show. After nine, I head up to the CNN cafeteria for one of Sonja’s fabulous omelettes: ham, jalapeños, a bit of bacon, broccoli, and cheddar. Top that off with some hash browns, and I’m ready for the day.”

Bob Schieffer, CBS Anchor, Face the Nation: “I get up every morning at 5:30, and while the coffee’s brewing I get the newspapers and look at the headlines. When the coffee’s ready, I eat breakfast, which is cold cereal in the summer and oatmeal in the winter. I read the New York Times and the Washington Post at home. At the office, I read USA Today and the Wall Street Journal, start returning and making phone calls, and try to act like a reporter.”