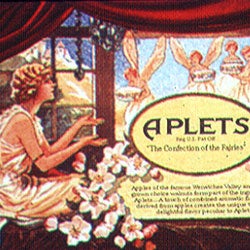 Back in the 1950s, I recall from my childhood, Christmas was a festival of fruit. People almost automatically sent each other boxes of raisins, dried figs, and candied oranges for the holidays, crates of Oregon pears, Ruby Red grapefruits from Texas. But what I preferred were the confections called Aplets and Cotlets.

These were sweet, sticky, soft, perfumy sort-of-candies with nuts inside, veiled in powdered sugar. I’d never tasted anything like them—though I later found out that they were basically an American version of rahat lokum, or Turkish delight. Whatever they were, they somehow seemed both familiar and exotic to me, and I was quite capable of going through a box of them in a day and a half.

As I got older and developed my own holiday traditions, I lost track of Aplets and Cotlets. I was more than a little pleased, then, when samples of them landed on my desk in honor of the 75th anniversary of the company that makes them. Along with the samples was a brief history of the confections: In the early years of this century, it seems, two Armenian immigrants from Turkey chanced to meet, went into business together, and eventually founded Liberty Orchards in the eastern Washington community of Cashmere. They grew a lot of apples and, at one point, had the idea of using them to make a version of a treat they remembered from their childhoods. It worked, and Aplets—as they were dubbed—were marketed as “The Confection of the Fairies”. Next came Cotlets, made with apricots.

Today, the company’s list of additional flavors includes Pineapple & Macadamia Nut and Raspberry & Pecan, and there are even some with chocolate coatings. But the original Aplets and Cotlets are still tumbling forth from Cashmere, and, hey, I’m ready for them as always.