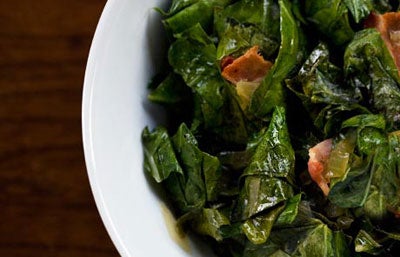 There’s traditional food for every winter holiday: turkey on Thanksgiving, goose on Christmas, latkes on Chanukkah, champagne on New Year’s Eve. But it wasn’t until I started spending a lot of time in South Carolina that I learned about what to eat on the first of the year: hoppin’ John and collard greens. Hoppin’ John, a traditional Lowcountry New Year’s Day meal, is basically black-eyed peas and rice with a dime cooked into it; whoever finds the dime will have a wealthy year. Collards are served alongside to represent folded cash, and there’s usually cornbread to soak up the “pot likker,” or the broth the collards are cooked in.

This particular meal has its roots in the slave era. Hoppin’ John originated on Carolina rice plantations, where enslaved West Africans ate it to replicate the bean-and-rice dishes familiar to them from home. You’ll also find hoppin’ John in Jamaica, Haiti, Cuba, Puerto Rico, and other New World locales where Africans were once enslaved. As for the collards, the slaves would simmer and soften tough greens in gravy, often with a ham hock or pork jowl thrown in for flavor.

White folks ate hoppin’ John too, but it wasn’t considered a respectable dish until its mentioned in the 1855 edition of The Carolina Housewife, written by an allegedly anonymous “Lady of Charleston.” You see, back then, a lady’s actual name appeared in print three times: when she was born, when she got married, and when she died. All the right people knew, however, that the “Lady of Charleston” was really Sarah Rutledge, daughter of Edward Rutledge, a signer of the Declaration of Independence. With a fancy family like the Rutledges copping to eating hoppin’ John, other white people could relax and admit that, yes, their African-American cooks were serving them the same in their houses.

Tough as leather and bitter as tears if not cooked correctly, collards were even less acceptable to society cooks than hoppin’ John. Sarah Rutledge didn’t include them in her cookbook, and neither did many other cooks before the 1960s; you won’t even find a recipe for them in that bible of Lowcountry cooking, Charleston Receipts, first published in 1950 by the Junior League of Charleston.

No matter; you yourself can cook them without the help of the Junior League because collards are relatively easy to prepare. The trick is to wash them well, cut them into strips, and simmer them forever, usually in a pot with some vinegar, chopped onions, and some type of pork: ham hock, hog jowl, or bacon. The porcine liquid in which they’re simmered is what gives collards their flavor, so go to town with it. Some people boil collards with garlic, some use beer, and some use molasses, but most use some kind of stock. For a really good vegetarian pot likker, boil your collards in a mushroom stock.

Then, no matter how you prepare them, serve your collards with hot sauce or vinegar alongside your particular favorite version of hoppin’ John. (There are more recipes for hoppin’ John than there are ways to get into heaven, and everyone thinks everyone’s method is blasphemous.) The classic Charleston Receipts recipe is the hoppin’ John most Charlestonians still swear by, and it’s nothing more than some black-eyed peas, water, salt, raw rice, onion, and bacon. You just boil the peas until tender, pour the peas and their liquid into the rice with the bacon and onion, and cook it together for about an hour. You can substitute plenty of things for the bacon, from hog jowls to smoked ham bones, and you can add some butter or not. Some people put in crushed Italian red pepper, but to my mind, the only seasoning hoppin’ John needs besides salt and pepper is cayenne. This hot, red chile, which was grown in South Carolina gardens way back when, gives the dish just the right amount of kick to jump-start a lucky and prosperous New Year.

Season: You’ll find collards all year ’round, but most folks think they taste better in the winter, from about the first frost through March or April. As for black-eyed peas, they’re dried and available regardless of season.

Where to find it: Collards grow almost everywhere in the United States, so keep your eyes peeled at your local supermarket or farmers’ market. Black-eyed peas are available in supermarkets everywhere.

Price: Farmer’s markets and gourmet shops sell collards for up to $3 a bunch, but you can find them in supermarkets and at roadside stands for about $1 a pound.

Amanda Cohen is the chef and owner of Dirt Candy, a vegetarian restaurant in New York City.