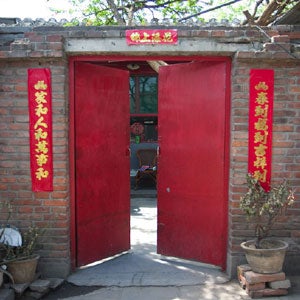 Last spring, on a warm, cloudless morning, I made my way through Beijing’s historic Dongcheng district, past old men playing mah-jongg on tables outside their shops and women bicycling home from the market, their baskets full of greens and tomatoes. My destination was a small home off a narrow hutong, or lane, where Chunyi Zhou, a 36-year-old with a quick smile, was teaching a cooking class in her open-air kitchen. When I arrived, Zhou had gathered her three students—expatriates from France, Belgium, and Hong Kong—around a long table set in the middle of her shady courtyard and had started to show them how to prepare the ingredients for gong bao ji ding, the classic dish known to Americans as kung pao chicken. She watched as they sliced ginger, garlic, scallions, and dried chiles and diced chicken breasts into small pieces, “the same size as the tip of your finger”.

Zhou, a former chemist from the southern city of Guangzhou whose passion for food led her to culinary school and, ultimately, to a change of career in 2006, told me that her apartment was actually one part of a building that had once been a single-family dwelling of four rooms surrounding a central courtyard. Like many of the residences in Beijing’s historic hutong districts, the house had been occupied by one family for hundreds of years, until the 1950s, when governmental decrees forced multiple families to share houses like this one, eventually dividing them up into apartments. The home’s original kitchen would have been an interior room adjacent to the main living area, built around a large wood- and coal-burning stove with a metal wok set into its top—a far cry from Zhou’s breezy, open-air situation, which bears a greater resemblance to the kitchens she was accustomed to in the south of China.

As the students prepped ingredients, I poked around the simple, utilitarian kitchen, which makes up half of her apartment’s private courtyard. In one corner of the courtyard, Zhou had created an alcove with counters and wood shelves, a small sink, and a two-burner propane wok range that delivers the powerful heat needed for stir-frying. Her pantry is nothing more than a pair of folding tables, just outside the alcove, on which Zhou stores bottles of oils, vinegars, and soy sauces; plastic containers filled with dried spices like sichuan peppercorns; and jars of chile sauces and pickled vegetables. Next to them, a sturdy, three-by-six-foot wood table serves as a work surface. To provide shade and protection from rain in the summer, Zhou erected a simple “roof” of straw screens and corrugated plastic over this half of the courtyard; in the winter, she encloses the entire space in this way to keep it heated. At the other end of the courtyard, which is filled with potted flowers and plants, Zhou set a low tea table and a collection of wicker chairs, where she and her guests may eat and relax.

Like all traditional Chinese chefs, Zhou uses a minimum number of tools in her cooking, relying on an arsenal of classic cooking techniques rather than on appliances and fancy equipment to create a wide variety of shapes, flavors, and textures. Her kitchen contains only two woks, a few ladles and strainers, a rice cooker, some mixing bowls, cutting boards, and cleavers, and an assortment of plates, bowls, and utensils.

Instead of teaching her students traditional Beijing-style cuisine—which, like all northern Chinese food, was historically based on wheat, in the form of steamed buns and pancakes, and richer meats like mutton and duck—Zhou focuses on foods from Sichuan and her home state of Guangzhou, which are lighter and spicier and contain more seafood and rice. Dishes representing other regions of China have become more and more commonplace in Beijing in the past half century, as people from all over the country have moved to the capital, bringing their traditions with them, and as the means of transporting perishable foods have improved.

The dishes Zhou’s students prepared the day I visited reflected the greater range of foods from different regions available in Beijing today. Once they had prepped all their ingredients, each took a turn at the stove to make his or her own gong bao ji ding, a Sichuanese specialty, as well as a simple preparation of moist, white-fleshed butterfish steamed with ginger and strewn with scallions, a dish from Guangzhou. As the work progressed, Zhou coached her pupils, explaining how to toss the ingredients in the wok so that they would cook evenly and telling them when to add the sugar, salt, and MSG. When the dishes were finished, we took our seats around the tea table, in the shade of the pomegranate tree that grows next to the house’s front gate, and Zhou explained to the students where they had gone wrong—meat cooked too slowly or a pepper cut too thick—and what they’d done right.

“I wanted to live in the hutongs because they are the soul of the city,” Zhou said as we began to eat. Like most Beijingers, she feels that these crowded lanes and buildings, some of which date to the 13th century, preserve the traditional Beijing lifestyle. They are home to a diverse mix—longtime residents, immigrants, the newly wealthy, and elderly pensioners—all living in close quarters. “There is community here,” Zhou said, describing how neighbors gather outside, share food, give unsolicited advice, and rarely knock before entering someone else’s house. “In the hutong, you never close the door, because then the neighbors think something is wrong.”