Pesto is the most famous of Italian sauces, and the most evocative. 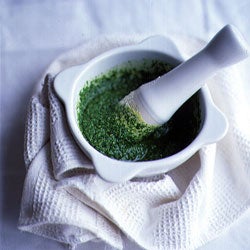 One autumn morning, Pietro Uslengo and I trudge up a steep path above the A-10 autostrada in Pra, just west of Genoa, on Italy’s Ligurian coast. On both sides of us, on narrow terraced ledges, are long, low-slung commercial serre, or greenhouses—not glittering high-tech horticultural palaces, but something more like greatly elongated garden sheds, with rust-flecked metal frames and cloudy glass panes veined here and there with time-worn cracks.

Uslengo is a director of the Confraternita del Pesto—an organization founded in 1992 “for the defense,” he says, of this celebrated but often adulterated green sauce. Pesto, according to the Confraternita del Pesto’s bylaws, is a “typical and ancient Ligurian condiment … synonymous with ‘Genoese-ness’ for all the Ligurians scattered around the world, who find in it the nostalgic memory of their land”—and Uslengo has brought me here, at my request, to show me how real Genoese basil, pesto’s star ingredient, is grown.

We’ve all had pesto. It’s a standard in Italian restaurants all over the world. (There’s even a story that Franco Malerba, the first Italian astronaut, smuggled pesto into space.) A lot of us have probably made pesto, too, filling our kitchens with the unmistakable aroma of those bright green basil leaves. But I think it’s safe to say that, if you’ve never tasted pesto in or near Genoa, you’ve never really experienced it.

Basil, it has been said, is the perfume of Genoa and the soul of pesto. Indeed, one characteristic of good pesto, as it is served in these parts, is that you can quite literally smell it across the room—and what you’re smelling, I hasten to add, is always the basil, never the garlic.

At least a bit of garlic is essential to pesto, of course, as are olive oil and pine nuts (or, in some regions, walnuts). Cheese is apparently a comparatively recent addition, and to this day there are recipes for pistou, pesto’s close cousin from just across the French border, that don’t include it. On the other hand, Ligurian culinary historians like to trace pesto back to the time of Virgil, who describes, in the Bucolics, a morning meal of bread smeared with a paste of garlic, herbs, olive oil—and cheese.

When cheese was first added to pesto, whenever that may have been, it wasn’t parmigiano-reggiano, but pecorino sardo—which is Sardinian sheep’s-milk cheese (Genoa has traded with Sardinia for hundreds of years), not to be confused with the more pungent pecorino romano. Parmigiano doesn’t seem to have been used in pesto until this century, but today it is common, either in combination with, or in place of, pecorino sardo.

But it is the quality of the basil, above all else, that determines the quality of the pesto. The best basil has a pronounced flavor and a generous aroma but is never bitter or minty. (Remember that pesto is a raw sauce, so there’s no cooking to soften the herb’s pungency.) And as far as the Genoese are concerned, the only basil worth bothering with is that grown in one of the urbanized agricultural communities that surround the city—Pra, Pegli, Coronata, Palmaro, and Voltri. Soil, climate, and farming methods here are supposedly ideal for the herb. Commercial producers in these areas have even awarded themselves an appellation: Their basil now comes to market bearing a tag reading “Basilico di Genova”. Local connoisseurs consider basil from Albenga, on the western Riviera, another major source of the herb, to be an inferior product. And don’t even get them started about that so-called basil—all pepper and mint—that grows in the hot Italian south.

In the temperate but cooler north, of course, the outdoor basil-growing season is limited. But the hills are lined with green-houses like the ones Uslengo and I have come to visit, and these guarantee Genoese cooks and eaters a supply of basil all year long.

Pino Sacco, the owner of this particular glass-covered mini-farm, is one of about 150 small growers in Pra alone. He meets us at the second greenhouse down from the crest of the hill, and, ushering us inside, offers a crash course in indoor basil farming the Genoese way. Down the length of the greenhouse, on three levels, stretch long, unbroken strips of tiny bright green leaves, covering every inch of raised beds roughly 60 feet long and about eight feet wide. The beds are filled with soil that is mixed with rice hulls for good drainage, fertilized, and irrigated regularly; the interior is thermostatically controlled, with sliding glass panels in the roof to let in fresh air and sunlight when appropriate. This helps maintain a constant temperature. (The larger the greenhouse, says Sacco, the easier the temperature is to regulate.)

Half a dozen men, stooping over the beds or crouched on planks stretched across them, are harvesting basil when we enter—not clipping it or plucking off the leaves, but pulling up whole tiny plants, hardly more than sprouts, by their delicate roots. “When the plants sprout four large leaves and two to four smaller ones,” says Sacco, “the basil is ready to pick. This takes about 30 to 35 days, from seed, in winter, and maybe ten days less in warmer weather.” For two months in full summer, when outdoor basil is abundant, the greenhouse soil is allowed to rest.

The harvesters gather the basil into mazzi, or bunches, of about half a dozen plants each. Later, these will be packed into individual plastic bags with damp shredded plastic at the bottom to keep the basil moist. Bundles of eight or ten mazzi (about enough for a family-size batch of pesto) sell in the better shops in Genoa about $6 apiece—or more.

As the price they’re willing to pay for its key ingredient might suggest, the Genoese don’t like to mess around with pesto. There is only one way to make it correctly, they’ll tell you: in a mortar, with a pestle (as pesto’s very name suggests). Apart from that, though, no two of them are likely to agree on exactly what the rules are. They will agree, however, that pesto is correctly utilized only in minestrone or on certain types of pasta—specifically, trenette (“train tracks,” the local version of linguine), trofie (which are a kind of gnocchi—little twisted cylindrical bits of pasta handmade with white, or sometimes chestnut, flour), lasagna, mandilli de saea (“silk handkerchieves,” thin lasagna-type sheets that are tossed with the sauce rather than layered with it), corzetti (pasta disks stamped with family initials and other designs), and testaroli (which are more or less pasta-dough pancakes). Pesto on spaghetti? Marginal. In risotto? Are you kidding? As a sauce for fish or chicken? You are kidding._
_

Visitors to Liguria sometimes think that the locals are kidding when they’re first served pasta al pesto, especially trenette and trofie, mixed with green beans and pieces of potato. But this is a genuine old tradition. One theory is that it’s a way to stretch the pasta; the Genoese are notoriously thrifty, and they might well like the idea of making store-bought pasta go a little bit further by stirring in something they can grow themselves. Another theory is that it’s to balance the aggressiveness of the garlic and basil.

Either way, well-made pesto is always a pleasure. And at its Genoese best, pesto is absolutely memorable—a remarkable mix of fragrance and flavor, a bit salty, a bit sweet, a bit earthy. No wonder it’s a touchstone for Ligurians, a connection to their land.