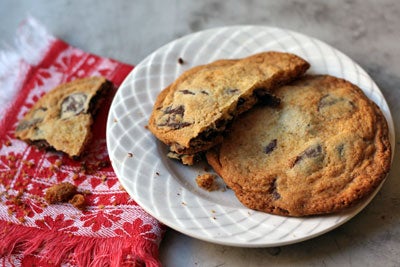 Winter in New York this year has been bone-aching cold, punctuated by snowstorms that shut down the city for what felt like days on end. After each one, the drifts would transform, suddenly and unpleasantly, into dingy gray slush mountains and deceptively deep curbside puddles. It’s hardly the stuff of a fairytale winter wonderland, but get indoors and it’s another story entirely: folks are bundling up and burrowing down, catching up on their Netflix subscriptions and diving headfirst into the sorts of cooking projects that only ever seem to make sense on the coldest winter days: all-day stews; chicken pot pie; sweet, spicy curries.

Woe was I, then, when a blizzard hit after I’d been traveling for a week, and I found myself stuck in my apartment with a nearly bare pantry: no meat in the freezer, no fruits or vegetables in the bin, half a box of dried pasta in the cabinet. What I did have, though, was two sticks of butter, just barely enough flour, a 10-pound bag of sugar left over from a large-scale summer iced tea experiment, and a box of fancy bittersweet chocolate chips.

It wasn’t until the oven was preheated and I’d already cracked the eggs that I remembered that my go-to chocolate-chip cookie recipe calls for brown sugar, which I very much did not have. I also didn’t have molasses, which the internet helpfully suggested I add to white sugar as a substitution — but I did have a jar of deep, spicy sourwood honey, which in my blizzard-blinded state I figured could kind of, if you squint, pass for molasses. So in it went: all the cookie ingredients, a full cup and a half of plain white sugar instead of the usual ¾ cup, plus three tablespoons of honey. Not surprisingly, the dough was paler and a smidge stickier than it is when I make this recipe using brown sugar, but the cookies baked up without a hitch, the honey caramelizing into bright, floral notes that were a sunny counterpoint to the bittersweet chocolate — perfect dunked in milk, curled up on the couch under a blanket, with the wind and snow roaring outside.