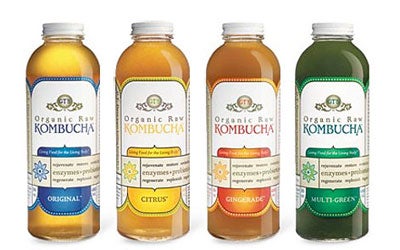 I’m tired of spending $4 a bottle for kombucha, but I’m helplessly addicted to the stuff. Kombucha is a slightly sour, gently effervescent beverage made from sweetened tea cultured with a thick disk of bacteria and yeast known as a “mother.” Seen in the hands of plenty a gym nut or hipster, it’s one of the trendiest drinks out there, flying off the shelves of your local Whole Foods or health food store. Fans of the drink claim that kombucha helps to prevent cancer, aids in liver function, and is helpful in warding off colds, although, of course, these claims haven’t been scientifically proven.

As per Edible Brooklyn, all the hipsters in my neighborhood are growing their own mothers, but my local probiotics dealer refuses to sell me one, claiming, “They’ve gotta be traded, dude. And you don’t have anything I want.” Thank god for Nick’s Natural Nook on eBay, where I can buy a mother for cold hard cash. Now I can make kombucha at home for pennies, and maybe I’ll have something to trade with the hipsters in the near future.