In Tuscany, white beans are more than just 'the poor man's meat'; they're a whole way of life. 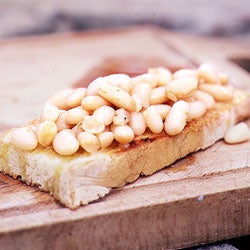 In the old days in the Tuscan countryside, when houses were heated by cavernous fireplaces, dinner often consisted of “pane e companatico”—bread and something to go with the bread. The something was very often white beans, cooked in a fiasco, or wine flask, in the ashes of the fire. The technique was simple. First the traditional straw covering was peeled away from the fiasco; then the dried beans were dropped in one by one through the narrow neck and just barely covered with water. A couple of unpeeled garlic cloves, a sprig of sage, some salt, a few peppercorns, and a generous dose of olive oil were added. Just before bedtime, the bottle was loosely sealed with a wad of flax or muslin and set on a bed of smoldering ashes, the embers spread around it like jewels. While the house slept, the beans cooked—to be eaten throughout the following day.

I’d always considered fagioli al fiasco (beans in the flask) a perfect example of the Italian genius for making frugality picturesque (and delicious).Yet in all the many years I’d lived in Tuscany, I’d never glimpsed, much less eaten, this dish; I’d begun to think it was a culinary legend. Who still drinks chianti out of straw-covered flasks, anyway? “Does anyone—did anyone—ever actually cook beans this way?” I wondered aloud one day to Marco Noferi, a farmer and one of the founders of Cooperativa Agricola Valdarnese, a farm in Paterna, not far from Arezzo, that produces organic olive oil, wine, preserves, honey, and fruits and vegetables—including heirloom beans. “Everyone did, but almost no one does now,” Noferi answered. “If you’re that curious, I’ll make them for you.” I was that curious. To add to my good fortune, he promised to prepare the dish with zolfini beans, named for their pale, sulfurous yellow color (zolfo is Italian for sulfur). Considered to be among the finest beans in Tuscany, zolfini are one of the heirloom varieties that the cooperative is helping to revive.

Noferi volunteered the services of his friend Viviano Venturi and of one of the farm’s partners, Tamara Scarpellini, for preparing the fire and the flask, and while the zolfini slowly did their thing in an outdoor fireplace at the farm, he and I sat in straw-bottomed chairs, looked out at the ripe tumble of crops, and talked beans.

The Tuscan passion for beans, he told me, appears to date back to 1528, when Pietro Valeriano, a church canon in Florence, reportedly began potting some type of Phaseolus vulgaris, or haricot bean, a recent arrival from the New World. (The species includes the pinto, great northern, kidney, and cannellino bean, among others.) Valeriano found these new legumes extremely tasty, as did the Florentine duke Alessandro de’ Medici, who helped popularize them. Soon the beans were being sold from street carts throughout the city, and by the 17th century, cannellini were widely cultivated in Tuscany.

Other nations have good white beans, too, of course—among them the mild tarbais of southwestern France; the big, ivory-hued gigandes of Greece; even the ordinary white navy, mainstay of mess halls and the U.S. Senate dining room. But here in Tuscany, Noferi continued, before the economic boom of the 1950s and ’60s, beans were “the poor man’s meat” and showed up in many guises: “plain” (with garlic, sage, and olive oil); in salads with oil-packed tuna and onions; on toasted bread; seasoned with herbs, tomatoes, and sometimes a bit of prosciutto or pork rind; or, as a special treat, with fresh sausages. And they are essential to ribollita (literally, “reboiled”), Tuscany’s most famous bean soup and a fixture on virtually every trattoria menu—a dish that begins as a quintessential winter concoction of vegetables (including cavolo nero, a deep green Tuscan kale), stale bread, and white beans and is recooked, usually in the oven (long enough to develop a golden yellow crust), the following day.

In keeping with the theory that you are what you eat, it’s little wonder that Tuscans began to be known as mangiafagioli (bean eaters). Even today, tales are told of Tuscans who used to pack a few kilos of dried white beans in their suitcases when they traveled outside their region.

Cooking the ubiquitous bean correctly was (and is) a matter of no small importance in Tuscany. Noferi explained the three cardinal components for preparing dried beans so that they are tender but firm, with imperceptible skins and a dense, rich flavor: time (at least two hours, more if the beans are old), temperature (the lowest possible, so that the water barely simmers—”Boiling them in a metal pot kills half the flavor”), and olive oil (the very best and freshest available). “You can’t really talk about beans without talking about olive oil,” Noferi told me. In November, when the olives have just been pressed and the oil is still thick, grass green, and fruity, there is simply no greater delicacy to the Tuscan palate than white bean bruschetta—toasted country bread rubbed with garlic, dipped in the water in which the fagioli have cooked, and smothered with beans and new oil.

In “modern” Tuscany, the wine flask has been replaced not by the microwave or the pressure cooker but by the coccio, a glazed terra-cotta pot with a lid. I’d noticed potbellied cocci sitting on the counters of bakeries all over Tuscany and could never quite figure out how beans fit into the bread scheme. Now that I’d seen a fiasco, it seemed obvious. The best bakers still use wood-burning ovens, and when they’ve finished making bread for the day, they set a pot of beans among the ashes to simmer and then sell fragrant portions of cooked fagioli along with their loaves.

I’d heard of another legendary Tuscan white bean, the sorana, grown only below the town of that name, in the sandy soil along the Pescia River. These beans, nearly impossible to find even in Italy, sell for more than ten times the price of cannellini—and twice that of zolfini. (Sorana beans are not sold in the United States.) So delicate are the skins of the beans, and so extraordinary is their flavor, that in the early 1800s the great opera composer Gioacchino Rossini, who was from the neighboring region of The Marches, agreed to correct a local composer’s scores in exchange for “a few kilos of those precious beans.”

Unlike zolfini, which grow low to the ground in small bushes and are never irrigated, sorana beans climb as high as eight feet, along bamboo trellises, and must be kept constantly moist. When harvested and dried, they resemble great northern beans, although their surface is an opalescent white.

It’s difficult to imagine anyone more passionate about fagioli di sorana than Valdo Verreschi, a chef and restaurateur, who’s even written a book about the famed beans. Verreschi makes sure that they’re always on the menu at his restaurant, Antico Ristorante Forassiepi, a modern, clean-looking place situated on a beautiful hilltop outside the stone walls of the medieval town of Montecarlo, not far from Sorana.

Verreschi and I spent a morning in early July walking through his own, scrupulously tended field of sorana beans, their tender stalks not yet bearing pods but filled with tiny, orchidlike white flowers. The air was surprisingly cool and the riverbank so lush and green it seemed impossible that just a few miles away, beyond the mountains encircling the valley, a fierce Mediterranean heat was scorching everything in sight. The beans, explained Verreschi, are irrigated with river water diverted into a small canal, then into shallow trenches that run between the rows. “This is an amazing microclimate,” Verreschi told me. “You could plant a sorana bean anywhere—many people have tried—and you might get a bean, but it wouldn’t act like a sorana when you cooked it.”

Verreschi invited me to his restaurant to have a look, and taste, of the real thing. The cooked beans I sampled had retained their shape perfectly, with skins so thin and tender they were nearly invisible and dense, buttery interiors. He also brought out a wonderfully creamy and flavorful soup of pureed sorana beans topped with homemade croutons and crisp, salty bits of pancetta. “The soup is ridiculously easy to make,” he confessed. “The beans do all the work.”

Verreschi stresses (and Noferi agrees) that when you get your hands on truly superb beans, including fresh cannellini, you don’t need to do more than cook them gently with garlic and sage and douse them liberally with good olive oil. In August and September, baskets of pale yellow cannellini pods are found in most Tuscan markets, and for a brief moment on trattoria menus, the ever present dried bean is replaced by fagioli sgranati (freshly shelled beans), full of flavor and gloriously nonuniform in size and color.

As our zolfini simmered in their flask back at the Paterna farm that day, I asked Noferi and Venturi how they could tell when the beans were done. “When they have absorbed every bit of the water and oil from the flask,” Noferi replied. And by then they had. He uncorked the bottle and gently shook the steaming beans into a bowl, covered them with olive oil, and ground black pepper over them. Then he ladled out a portion and passed it to me. They were the stuff of legend.