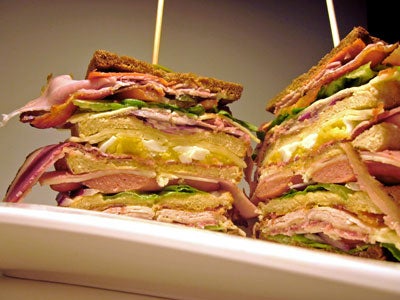 Among the world’s pantheon of sandwiches, few stand so mighty as the Dagwood: taller than your mouth can open, more ingredients than the average corner deli might carry. We asked the team of Sarah Kanabay and Chris Onstad, co-founders of online food magazine The Farmer General, to give it a whirl.

Sarah: Telling your friends that you are constructing a Dagwood is, in my experience, rather like telling politicians that you’re constructing a Health Bill: everyone has an opinion about what you should and should not put in it. There are special interest parties pushing for Salmon Subsidies, lobbyists from the Havarti Union of Lace-Patterned Melting Cheese, and of course the United Separatist Sardine Front, launching an all-out guerilla ad campaign in the vicinity of the funny pages. Everyone wants a piece of the pie.

Chris: 1992. The California gold country foothills. It is unfortunately early in the morning: mailmen have yet to lace their soft black boots, birds have yet to vomit into their children. I sit on the bus, headed to high school, Walkman dutifully bound to my head. It is the Cure, or The Sundays. The sun radiates through the tall stands of country pine, lending to our young necks and ears the occasional glint of health and timeless vitality. Then, at a row of rural mailboxes where we’ve never stopped before, the bus driver pulls over. There is a new kid. He is clearly fresh from city ways, wearing spit-shined Dr. Marten monkey boots, cargo shorts, a white oxford that would make a freshly-showered Neil Finn burn with envy, and a crisp jean jacket. The Sun Blossom King sports Wayfarers with turquoise arms. His ears are plugged with the latest in earbud technology. Considerable thought has fashioned his hair today, and his backpack is the best JanSport can offer.

Sarah: Building the Dagwood put me in mind of the one piece of literary theory that I thought I understood, my senior year of college—the notion of words being symbols, as opposed to fixed objects. I can say “tree” and you might think of a white birch, swaying in the wind; your Aunt Mindy hears “tree” and thinks of a saw palmetto from her youthful summers on the Carolina coast. Telling people that you’re building a Dagwood elicits similar responses. First, there’s the “Oh, like the cartoon?” And then there are the interpretations. This person says it absolutely has trout, that one declares that liver is a necessity. You mention that the original sandwich appears to have contained both tongue and baked beans according to the internet, and are decried as a heretic by a man who insists that a true Dagwood must contain pepperoni and yellow mustard, but nary a slice of tongue nor bean. This sandwich, it would seem, is not a single entity, and its name is hardly a fixed or known quantity. “Dagwood” is simply a symbol, a placeholder for a sandwich that is both singular and multitudinous— the Dagwood is both the Origin and the Omega, the Ouroboros of bread.

Chris: His name, my curious colleagues will discover over time, is Eric. He is from Bakersfield. His mom does the books for a local seafood operation. We live 170 miles from the sea, but we do not do the math. We don’t eat seafood anyway; it’s trout and bluegill for us. Who brings fish to the mountains? Though he is an Irish boy from an infinitely generic expanse of California flatland, Eric brings to our gold country mountain community a sturdy crate of Bob Marley, Peter Tosh, and Malcolm X media. Eventually he succumbs a bit to our hillbilly ways and purchases a ten-dollar nylon guitar on which to bang out Nirvana power chords. His handsomeness and confidence also cause him to become useful to the local women. We marvel; his father gives him a terrible white convertible. The magic has begun, but I will shortly derail it.

Sarah: What you have to admit to yourself, though, at the end of the day, is that you only have one stomach, and it can only hold so much sandwich. The Dagwood is a true test of gluttony, a pants-punisher, not to mention an engineering puzzle on a slab of bread. The ur-sandwich. The widowmaker. The lunch that makes you cry “uncle.” But, still — it’s just a sandwich. Or is it?Building a Dagwood will have you asking two questions:

The answer to both of these questions is this: barely.

Chris: The Villa D’Oro, a functional Italian cannelloni-type restaurant, has been churning out spumoni and piccata since your mother believed in Christmas. Fifteen and desperate for cash, I walk in and ask the owner if I can wash dishes. He looks me over, shakes his head, and says I can start that night. The shift does not go well; I am paid in cash and not asked to return. Eric takes the vacancy, and stays on. He works hard. He graduates to the Pizza Factory, throwing dough and cooking pies. High school comes and goes, and he travels the nation, cooking in Hawaii, Alaska, Texas. He marries a good woman. He takes up and abandons smoking. Fortuitously, he lands in Portland, at this point slinging pans in the highest-end joints in town. Eventually, he buys out a charcuterie counter, and every morning by eight he’s assembling pates and terrines. He can spatchcock a chicken and roll a porchetta. It is the Belly of Paris, Northwest. 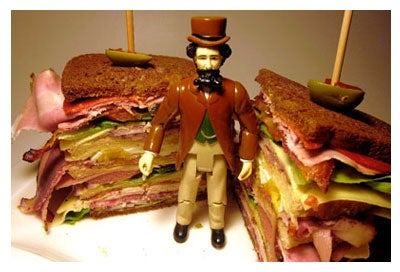 Sarah: When we set out to source ingredients, Onstad and I both knew that there was only one place to get the meat from: our friend Eric Finley at Chop Butchery and Charcuterie, in the City Market here in PDX. Eric’s expertise never fails to disappoint, and here, he shone: peppery pastrami, richly smoky bacon, pink roast beef, and salami so good it almost seemed wasted on a sandwich came to us in crisp white paper wrappers, along with enthusiastic suggestions involving mortadella and stuffed olives. (The Dagwood effect again—be prepared to embrace the enthusiasms of others when constructing this sandwich). After weeks of mental wrangling, we settled on a generally Italian sandwich as our Dagwood model, and Eric’s meats marked the beginning of our porky, fatty odyssey made real. We added to the roster creamy havarti, tart Swiss, and sharp provolone, alongside pepperoni, butter lettuce, tomatoes, red onion, dill pickle slices, and hot dogs (briefly considered as architectural elements, vis-a-vis a dowel-like insertion into the guts of the sandwich). Eggs were softly boiled, so that their yolks were golden and creamily tender, and in a prep bowl we mixed together a sandwich spread whose ingredients are secretively maintained by a sandwich master in northern California (we can tell you that it involved spicy brown mustard and mayonnaise, but, you’ll have to ferret the rest out for yourselves).

Chris: Sarah writes me. She wants to create another complex, impractical, and hopelessly outmoded dish from before we were born. It’s a thing we do. The Dagwood Bumstead sandwich. I’m game; who doesn’t want a Dagwood? Nervously, I text Eric to see if he’ll comp the flesh. We made a timpano for Thanksgiving, and it cost a hundred dollars. I can’t go around doing things like that every week. “Done and done” comes the reply. Straight Eric. Busy man. Hands no doubt fresh from kneading a mountain of pink coarse grind, iPhone slicked with unctuous grease.

Sarah: Bread was on hand, in both dark rye and white varieties—the dark rye for substance on the outer ends of the sandwich, the white bread for the innards (if we were to have any hope of fitting this thing in our mouths, the middle would have to be compressible). All slices were toasted to improve structural integrity, and, with the rest of the ingredients laid out on platters, the construction began.

Chris: Mortadella, pastrami, roast beef, ham, salami, turkey, frankfurters, bacon, pepperoni. He and his team hand them over gratis. White paper parcels spill out like a Christmas mailbag. This is the power of having been at school together, as many a Wodehouse novel has taught us. Pickles, onions, butter lettuce, tomato, a single stuffed green olive topper on a skewer. Chopped 8-minute egg. Swiss, provolone, American, pepperjack. Mayonnaise and mustard mixed with an oregano vinaigrette. We layer the sandwich by instinct, mating dry with wet, mild with strong, sliding in a toasted slab of dressed, sliced bread for stability as needed. The driving vision is to be able to pick it up and take a full bite of it. The cartoon version is hyperbole; we know that Chic Young was just trying to entertain.

Sarah: We started off with something of a plan, but, as the sandwich took shape, that fell away in favor of simply feeling our way through the layers; less heed paid to structure, more to tastes. Havarti, nestled next to turkey, blanketed by bacon; roast beef paying court to red onion and provolone. The sly surprise of pan-fried hot dogs in the middle, an inspiration of Dagwoodian gluttony, and the final ‘have we forgotten anything?’ layer that involved pig, pig, and more pig. A long barbecue skewer. A triumphantly fat pimento-stuffed olive. Seven vertical inches of glorious sandwich, ripe for the picking, there on the plate, resplendent with a long tongue of draping pastrami, the golden suggestion of egg yolk. A feast for the senses. More, as all sandwiches are, than the sum of its parts.

Chris: I take a five-dollar wager from Sarah’s housemate that I can’t get it all in one mouthful. Using a push-and-twist technique, I compress the striated deli masterpiece into my truly unremarkable bite-zone and take it all in one go. Disgusted but laughing, my wagering partner counts out the money. It’s a stunt, of course. No one needs this exaggerated sandwich on a rational or regular basis. No one thing stands out, other than its ostentation. I’d rather have one of the grilled beef and onion quesadillas Eric and I used to cook late at night—speaking in hushed tones of Lisa Bonet and which of us she might prefer—once we’d broken that naugahyde-scented social seal that pervades the great yellow conveyance of youth.

When not lamenting the perpetual depression of his couch-ridden dachshund, author and award-winning cartoonist Chris Onstad enjoys nothing more than sharing an evening with his codependent enabler glutton friends. He holds an unimportant degree from an important university. | Writer Sarah Kanabay can usually be found on a side street in Portland, hot on the trail of an edible Italian sandwich or a Chinese place that might deliver to her neighborhood. A former prep cook, she trekked across the windmill-dotted fields of America to attend the Oregon Culinary Institute — and stayed to eat her way across the city after graduating with a degree in pastry.