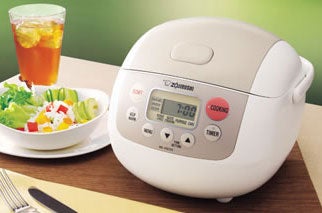 Who’s willing to admit when her mother-in-law is right about some things? Well, mine was right on about Zojirushi rice cookers. She’s Korean, and she knows about rice: the 10-cup induction-heating Zojirushi she gave us a few years ago makes wonderful white, brown, or sushi rice. My only complaint is that it doesn’t do a great job with smaller amounts like one cup, which is why I think a lot of people, especially singles and smaller families, will love Zojirushi’s three-cup Micom Rice Cooker & Warmer. It employs the company’s “fuzzy logic” technology, which enables the appliance to automatically make fine adjustments to temperature and heating time, and it has a clock and timer functions. You can apparently bake a cake in this thing, too, which sounds pretty weird, but if anyone’s tried that, I’d love to hear about it. Zojirushis are widely available: online sources include Chefs Catalog and Amazon.