Luscious, gorgeous, dripping with juice, they're one of summer's great sensual delights. 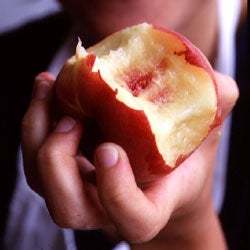 The other day, a longtime friend remarked that she had never seen me eat a piece of fruit. “Why that’s not true!” I replied defensively. “I buy fruit all the time!” But then it occurred to me that maybe buying it is all I do. Buying it and arranging it in bowls—where, to be honest, I usually leave it until it begins to expand or contract, as nature will have it, and a swarm of fruit flies appears from nowhere to tell me that it’s time for it to hit the compost pile. I guess I love the idea of fruit more than fruit itself. But if that’s true, it’s only because most fruit never tastes as good today as I remember it.

As a young girl, I’d spend summers with my grandparents in Sacramento, California. My grandparents were world-class, and they really had a flair for spoiling a kid. Even then, I loved hanging out in the kitchen—and in those pre-microwave, pre-fast food days, a whole lot went on there. My grandmother was a simple but wonderful cook. She didn’t drive, though, so my grandfather did all the shopping for her, and he’d let me tag along on his trips. He was a great old-fashioned shopper; to him, the act of gathering was as important as the goods. He’d go from store to store, seeing friends in every one. He was a good customer. “Lloyd,” they’d say to him, “I saved you these double-yolk brown eggs,” or “this fat little hen,” or “these ripe beefsteak tomatoes from Modesto.” Thus, I learned to respect the art of going to the market, and learned to expect to pay for quality.

Whatever my grandfather had bought, my grandmother would prepare it in the same spirit. Every summer morning, for instance, she’d squeeze sweet, pulpy juice from a pile of oranges. She’d slice strawberries into two deep red hearts and serve them with a little sugar and cream. And for about two weeks during early summer, we’d feast on my favorite fruit of all—white peaches.

Early in June, my grandfather would drive more than a hundred miles down the Central Valley to Fresno. He knew a farmer there who had Babcocks, which were pretty much the only white peaches grown commercially back then. In those days, the harvest season was short—only a couple of weeks—making it, of course, that much sweeter. The farmer himself would pick and pack the peaches in a single layer, lining up the flat wooden crates on the back seat of my grandfather’s big Buick. At home, we’d keep them on the back porch, which was a bit cooler than the kitchen, and eat them till those crates were empty.

In the kitchen, I’d watch my grandmother gently run her paring knife over the downy skin to loosen it from the flesh. Then, if she had judged it right and the peach was perfectly ripe, the skin would pull away easily, exposing the pale, luscious flesh. We ate them in the morning with a little sugar and half-and-half, instead of strawberries, and at night either with homemade vanilla ice cream or piled up on a crumbly shortcake with fresh whipped cream. And as we’d eat them, we’d always chant the same little peach mantras: “Aren’t these delicious?” and “Must be the best year yet!” My grandfather would close his eyes in deep appreciation and savor the luxurious, ultrasweet slices. “You just can’t beat ’em.”

No, you can’t—but you’ve got to have respect for white peaches. You have to treat them right. They’re so big and soft and delicate that if you even look at them wrong, they’ll bruise. Yellow peaches have higher natural acidity, so while they’re sweet, each bite has a tangy “push-back” with hints of butterscotch and vanilla. White peaches are low in acidity. Bite into one and you’ll taste no tartness—only an aromatic, floral sweetness. A ripe white peach has an undertone of raspberries, and if it matures for a few days, the flavors deepen and it starts to taste a little like muscat grapes. Eating good white peaches is the real thing—a rare experience.

Peaches are grown in central California, from Chico down to Bakersfield. Summers there mean hot, dry days and cool nights—perfect for growing stone fruits; sunlight and dry heat encourage strong photosynthesis, which develops the fruit’s sugary sweetness. At an elevation of 2,800 feet, nights are cool, so the fruit develops at a slightly slower pace, preserving its delicate flavor. Commercial orchards once pruned their trees low and vase-shaped for easier harvesting. Now they plant at high density—six feet apart, the trunks only two feet high, the trees pruned into two Y-shaped branches, so they look strangely two-dimensional. Every tree in the orchard is identical, making it easier to spot any growth or mold problems. The open structure of the tree allows all the fruit equal sunlight, so it ripens at the same rate. You get less fruit than from a big tree, but the quality is much higher. A mature six- to seven-year-old tree yields about 80 one-pound peaches.

Today, California growers export white peaches (and their cousins, white nectarines) to Asia and elsewhere, and the harvest season has been extended from May to September—with evocatively named varieties such as Snowflame, Snowbrite, White Lady, and Summer Snow. The stone fruit industry is in search of the always-elusive perfect commercial peach: flavorful, with soft, ripe texture, but durable enough to survive shipping. At the best farms, the fruit is allowed to hang to full maturity, for an extra week, to develop a strong, perfumy sweetness and intense flavor. It is then picked by hand in the early morning and packed in individual cups, in single-layer boxes lined with paper and foam. By midnight, the crates will arrive at the airport in San Francisco, and can be in Boston in time for the next day’s dinner. Yes, you’ll pay for this luxury—but as I learned from my grandfather, quality is worth the price.

And it’s my grandfather I’m thinking of, now that white peach season is here again. I remember so well those hot summer afternoons, sitting on the grass in my grandparents’ garden with a pile of paper napkins and two or three white peaches, rubbing the downy fuzz off with my T-shirt, then biting through the rosy skin into the sweet, pale fruit. Once I ate four before they found me with my face, hands, and arms covered with the sticky, sugary juice. Now that’s what fruit should be.