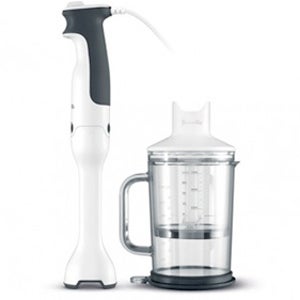 Once upon a time, I had a modest but burning dream to be able to puree my vegetable soup in the pot I made it in. How much more soup I would consume if only I didn’t have to keep transferring quantities of hot liquid and veggies to my regular blender, a cumbersome and inelegant act. This seemed to be an easy enough dream to fulfill—just buy an immersion blender. But which one? The product reviews on so many are dismal: “not strong enough”, they say. Sadly, I can confirm this through the experience of having spent more than twenty minutes laboring over a pea soup with a so-called “industrial model” and still ending up with grainy chunks. Then, I was turned on to the Breville stick mixer and its powerful 280 watt motor. The first time I dunked it into my pot of cauliflower soup, it purred through it with such ease, I thought it must be some mistake. But the stuff was silky, even aerated. Same goes for my carrot soup, and it also does good work on gazpacho. The device, so says the manual, is capable of much, much more—a chopping bowl attachment, for instance, allows it to double as a food processor. But for now, I am content to stick with soup.