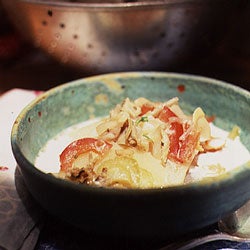 The East Hampton’s Ladies Village Improvement Society has published 13 cookbooks since 1896, each one with a different clam chowder recipe. This version is adapted from the 1898 edition.

Natives (Bonackers) of the East End in the Hamptons really know how to make chowder.
Yield: serves 12