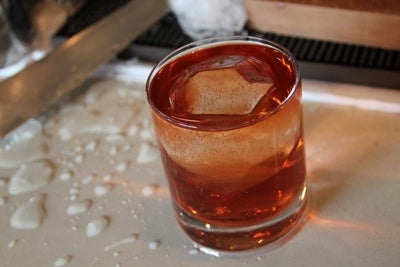 Once the smoke subsides, we're left with a potent cocktail, sweet-bitter with a balanced smoky kick. See the recipe for the Courting Rachel ». Helen Rosner
SHARE

Named in honor of the wife of Andrew Jackson (whose nickname was Old Hickory), this punched-up Old Fashioned developed by mixologist Andrew Bohrer of Seattle’s Mistral Kitchen gets a rich kick from rye simple syrup and hickory smoke. Bohrer serves it over a single large ice cube which he carves barside to resemble a diamond; if you’re not an adept ice-carver, any large-sized ice will do.