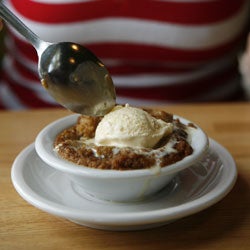 Rich, subtly spiced with cinnamon and ginger, and sweet with molasses, this dessert is a version of the pudding that has been served at the venerable Rhode Island clam shack Aunt Carrie’s since it opened, in the 1920s.

This dessert is rich, subtly spiced with cinnamon and ginger, and sweetened with molasses.
Yield: serves 6-8