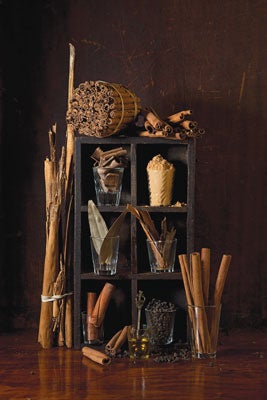 Some 50 different plants belonging to the genus Cinnamomum are cultivated throughout the world. The products derived from these plants are sold as quills, chips, powder, buds, leaves, and oil. Often what’s sold as cinnamon is actually a form of cassia—that is, one of a number of species of Cinnamomum that have a flavor sharper than that of true cinnamon. Below is a guide to both spices’ predominant forms, aliases, and uses.

1. Only Cinnamomum verum (a k a C. zeylanicum), often labeled Ceylon cinnamon or Sri Lankan cinnamon, qualifies as true cinnamon. The cinnamon tree’s inner bark is rolled into golden, layered quills that are mellower in flavor and more brittle than quills of cassia. True cinnamon originated in Sri Lanka but also grows in Madagascar, India, the Seychelles, and Latin America.

2. The outer bark of true cinnamon is sometimes left intact, making for rougher, woodier pieces with a more bitter flavor.

3. Cinnamomum cassia, one of the most widely cultivated cassias in the world, is harvested on a large scale in China. Chinese cassia is harvested after only four to five years, before the bark has accumulated high concentrations of fragrant oil, and is therefore less potent than Vietnamese cassia.

4. Cinnamomum cassia that is grown in Vietnam, labeled either Vietnamese cassia or Saigon cinnamon, is harvested no sooner than 15 to 20 years after planting. Its thicker bark looks and tastes so different from Chinese cassia’s that it was once thought to come from a separate species. The Vietnamese version has a far more robust and peppery kick.

5. Ground cinnamons and cassias are widely available and convenient to cook with, but because they lose potency as they age, it’s important to use them within six months of purchase.

6. Cassia leaves, called _tejpa_t in Hindi, are used in India much as bay leaves are in the West. Dried or fresh, they bring sweet, spicy undertones to curries and rice-based dishes.

7. Indian cassia (Cinnamomum tamala) has a lower oil content than other cassias, but as its outer bark is usually left intact, it has a tannic bite nevertheless. It is sold in broken shards, often mixed with the bark of closely related Himalayan species.

8. Korintje cassia is a premium-quality Indonesian cassia (Cinnamomum burmannii) harvested from trees grown around Indonesia’s highest volcanic peak. The cool climate produces a slow-growing tree with a high concentration of fragrant oil and a rich reddish hue to its bark.

9. Clovelike cassia buds, used for pickling, mulling, and tea, are the immature flowers of Chinese cassia trees. They have a more floral, fruity scent than the bark and less of a bitter edge.

10. The spice sold as cinnamon in U.S. supermarkets is usually Indonesian cassia, a lesser-quality Cinnamomum burmannii. Grown in lowland forests, this cassia has a lower oil content than the mountain-grown Korintje kind but still packs a punch.

11. Cinnamon and cassia oils, used in baked goods, candy, cosmetics, and potpourris, are distilled from bark fragments, leaves, and buds and contain potent concentrations of cinnamaldehyde, a fiery compound in all cinnamons and cassias.