A Guide to Lamb Cuts 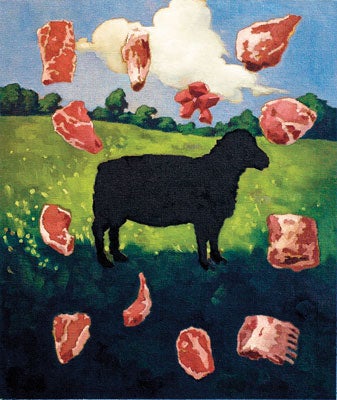 The meaty leg of lamb and the elegant rib rack get all the love in the United States, but getting to know cuts from other parts of the animal can vastly expand your cooking repertoire to include dishes like hearty stews, juicy burgers, lavish roasts, and deeply flavorful tagines, curries, and kebabs. When buying lamb, look for fine-grained, rosy-red meat with firm, white fat. As a rule, lamb labeled USDA Prime or Choice and grass-fed lamb sold at farmers’ markets have the best flavor and texture. Below are 12 versatile lamb cuts and suggestions for how to cook them; at right is a visual primer on where these cuts come from.

Square-Cut Shoulder This flavorful, ample cut consists of nicely marbled meat that has a pronounced sweetness. Because the shoulder muscles do more work than the leg muscles, they’re less tender and thus take well to long, slow roasting or braising. Ask your butcher to remove the bones and prepare the meat according to your needs: rolled and tied for a roast, cut into chunks for a stew, or ground for burgers, moussaka, or Middle Eastern spiced lamb dishes like kibbeh.

Arm Shoulder Chop This inexpensive cut from the lamb’s shoulder section has rich marbling and can be cooked in a number of ways; try marinating and pan-frying or broiling them to medium rare or braising them in red wine and herbs.

Stew Meat You can make rich stews—from French lamb navarin to Indian rogan josh—using pieces cut from almost any part of a lamb. We think stew meat from the shoulder is best, as it becomes incomparably tender during stewing and braising. You can save money by buying deboned portions of the shoulder and cutting it into one-and-a-half-inch cubes yourself.

Fore Shank The shank is the muscular bottom portion of the leg. It is the ultimate cut for slow braises that require rich, intense flavor, such as North African tagines. Long cooking causes the connective tissue to break down and yields succulent, fork-tender pieces. A rich lamb shank takes well to bright-tasting garnishes like gremolata (a mixture of lemon zest and chopped parsley) or sweet ones like our apricot chutney.

Neck Slices Typically sold as thick, bone-in slices, lamb neck is inexpensive and full of flavor. Like oxtail, neck meat also has plenty of collagen, a natural compound in red meat that lends a silky richness to stews, braises, ragus, and other slow-cooked dishes.

Breast This inexpensive, rectangular-shaped cut consists of meat and rib bones; it’s often trimmed and sold as spareribs. Boneless breast can be stuffed with bread crumbs, rolled, and braised or roasted. You can also buy ribs (often called riblets) separately; they’re great grilled and basted with a tangy-sweet vinegar sauce.

Rack of Lamb A whole rack of lamb—comprising seven or eight ribs from the center of the animal—makes a supreme roast. A classic preparation calls for a crust of herbs and coarse salt and roasting over high heat. For a more striking presentation, ask your butcher to french the rack—that is, remove the layer of fat and thin strips of meat and muscle extending to the ends of rib bones—or do it yourself following our simple instructions (see How to French a Rack of Lamb).

Rib Chops One of the most popular cuts is individual rib chops, which can range in size from dainty New Zealand chops to meaty Colorado ones. Each has a tender eye of lean, pink meat and a thick layer of flavorful fat.

Loin Chops These diminutive T-bone steaks contain a portion of the loin and tenderloin and are the leanest, tenderest, and priciest cuts. Cooked quickly on the grill or under the broiler, they develop a caramelized crust and have a pink, juicy center. Ask for chops that are at least an inch thick if you like your lamb medium rare. The whole loin is called a saddle; two loin chops attached by the backbone are called an English chop.

Sirloin Chop The thick, inexpensive steaks cut from the fat, sirloin end of the lamb’s leg and hip section are tender enough to grill or broil, steak house style, and are wonderful served with mint sauce, scalloped potatoes, and creamed spinach.

Leg This generous cut, which can weigh anywhere from five to nine pounds, is the perennial choice for holiday feasts. The whole leg—which comprises both the narrow shank and the plump sirloin—can be simply seasoned with salt and pepper or a spice rub and roasted with the bone in. The leg is available in several different forms: sirloin end, shank end, short leg, and frenched. You may also ask your butcher to debone and butterfly the leg so that it can be splayed on the grill or stuffed, rolled, tied, and roasted.

Top Round This fist-size, one- to two-pound cut is fairly new on the market; it’s a large muscle from the leg that has the full flavor of tougher cuts but is tender enough to be grilled or pan-roasted. Grilled, sliced top round makes a perfect centerpiece for a composed salad like our recipe for lamb salad.