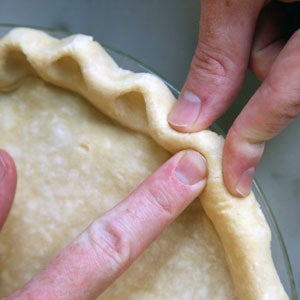 For novice bakers, a light, flaky pie crust can seem like an elusive grail, but following a few simple principles can make that goal a whole lot easier to achieve. Foremost among those is keeping the ingredients cold. Doing so not only makes the dough easier to handle; it helps ensure a toothsome crust. Of prime importance is the use of cold, hardened butter because it disperses into the flour more evenly, promoting the creation of tiny pockets of steam during baking, which, in turn, create layers in the crust. It’s not enough to start with chilled butter, though; you have to keep it cold as you work the dough. Using ice-cold water and working quickly on a cool marble work surface help accomplish this; so does chilling the dough once it’s made (this also has the advantage of relaxing the gluten that makes a dough tough). Below are our instructions for a flaky pie crust.

3. Create a well in the center of the butter-flour mixture; add 1⁄2 cup ice water; mix together with hands.

4. Quickly and gently scrape together moistened dough and form it into a cohesive mass.

5. Pull away walnut-size pieces of dough and smear them with the heel of your hand (this technique, called fraisage, helps produce flaky layers).

7. Roll a floured rolling pin from the center of one of the dough pieces to the edge, rotating the dough, little by little, until circle is 1⁄8″ thick.

8. Carefully wrap dough around the rolling pin and lift pin over the edge of the pie pan. Gently unroll dough over the pan.

10. Press down on rim lightly to adhere top crust to bottom one; trim off excess dough with a paring knife. Fold edges under to form a thick edge.

11. Crimp edge of crust by placing two fingers on the crust’s outside rim while placing one finger on the inside and pressing outward to form a V.