"Putting by" food isn't just practical—it's a way of reconnecting to our culinary past. 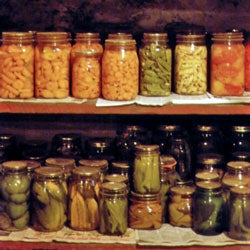 In their book Home Made in the Kitchen (Viking Studio Books, 1995), Barry Bluestein and Kevin Morrissey simplify some basic pickling techniques:

FOR HOT SEALING: Submerge empty jars and flat metal seals in boiling water until ready to use. Fill and seal jars one by one.

FOR A HOT-WATER BATH: Place jars on a wire rack in the bottom of a tall 8-quart stockpot. Fill the pot with water to cover the jars by 2″. Remove the jars, bring the water to a boil, and use tongs to lower the jars into the boiling water for the time the recipe specifies. Remove jars from pot and set aside to cool.