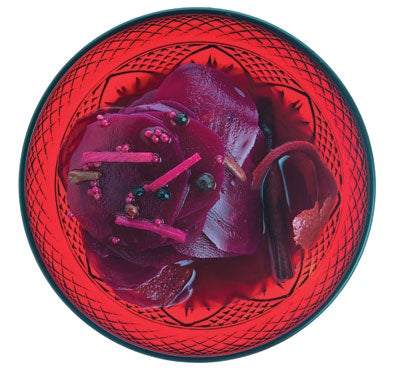 This recipe is inspired by rosl, a Jewish specialty from the Ukraine that calls for pickling beets in brine. Todd Coleman
SHARE

When I was a kid, every pickle my father ate was a bit of a disappointment. Dad, who grew up in the 1930s and ’40s in the Bronx, New York, remembered plucking kosher sours out of barrels filled with cloudy brine—”Now those were pickles!” he’d tell us. I only knew Claussen and other vinegar-cured pickles, the kind you buy in jars off the supermarket shelf, and I liked them just fine. But when I finally tasted a real pickle—the kind made the old-fashioned way, fermented with nothing more than salt, water, and time—I realized what I had been missing. A vinegary pickle plows through your palate with its tartness (often in a most pleasing way), but a live-cultured, salt-cured, fermented one tells a more multifaceted story. It is sour, to be sure, but it tastes of something more, something elusive: It’s the flavor of Middle Europe captured in one bite.

When I started cooking for a living, I realized that the complexity I’d tasted in that pickle is the hallmark of well-made fermented foods, which include some of my very favorite things to eat and drink: not just pickles, but aged cheeses, tangy sourdough breads, blistering kimchis, tart yogurts, winy salamis, and of course, wine itself. I’d rush to volunteer on fermenting projects in the restaurants where I worked: I was eager to learn how salted cabbage could turn into sauerkraut, and how buttermilk mixed with cream and stuck in the back pantry, turned into a pretty good approximation of creme fraiche in a few days. Making my own yogurt seemed like kitchen magic, the way it so effortlessly soured and thickened overnight.

I’ve been out of professional kitchens for several years, and in the meantime, it seems fermented foods have become something of a culinary trend here in the States. Beer making, cheese making, sourdough bread making, and, of course, pickle curing are now legitimate hobbies for the industrious DIY food lover. With markets stocked more generously than ever with items like kefir (an effervescent milk drink) and kombucha (fermented tea), I grew curious about the vast range of fermented, or live-cultured, beverages, foods, and condiments found around the world and how they’re actually made. What’s happening inside bottles of the fizzy, malty, bread-based Eastern European drink kvas? And could I actually make things like soy sauce and miso at home? 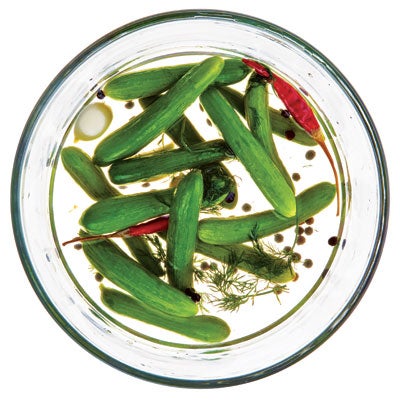 Most commercial pickles are preserved with vinegar, which is the product of one kind of fermentation. But sour pickles develop their complex flavor thanks to lactic fermentation, the process by which the naturally occurring bacteria Lactobacillus transforms and preserves foods, usually in a brine. The balance of salinity is key: You want enough salt to get a nice, crisp pickle and to prevent the growth of pathogens or mold, but not so much that the pickles are unpleasant to eat.

The answer to that last question is yes, though it would take a long time to make them. I learned this from a man named Sandor Katz, who is the Johnny Appleseed of fermentation in this country. In the final days of summer last year, I headed to a bucolic hillside farm in central Tennessee for Katz’s five-day workshop on fermentation. I was part of an eclectic group of 13 students, including a newly wed home-steading couple from Maryland, a performance artist and poet from Georgia, and a General Motors wheel buyer based out of Michigan, who had gathered in the humid basement of a midcentury ranch house to learn how to preserve foods.

Some good friends of mine had introduced me to Katz by giving me his celebrated book Wild Fermentation (Chelsea Green, 2003). Inspired by it, they were running out of counter space for all their pickle and sauerkraut projects. In Wild Fermentation, Katz writes with an infectious combination of erudition and evangelical vim about the pleasures of fostering and consuming edible cultures, from the familiar (sauerkraut, beer) to the arcane (a sweet Japanese rice beverage called amazake, a bubbly Guyanese soft drink called sweet potato fly).

Katz is a 49-year-old with piercing blue eyes and a shock of steely curls that creep down over a memorable set of silvery muttonchops. He was not raised in a pickling family: He grew up a city boy, on the Upper West Side of Manhattan, enjoying deli pickles just like my father did. As a young man, he did policy work for the city, but in 1993 he made a radical change in his life. He moved to a commune in the hills of central Tennessee and began gardening. “It was a rude surprise to me that all of my cabbages and all of my radishes were ready at the same time,” says Katz. Not quite knowing what to do with his bumper crop, he remembered that sauerkraut might be an option, and using The Joy of Cooking and some favorite macrobiotic cookbooks as guides, he set to fermenting his first batch. The garden kept providing, he kept pickling and preserving, and before long, he was hooked. “Being able to create that flavor was really exciting,” says Katz. “And figuring out an effective way to keep eating those fresh vegetables through the fall and winter was also really exciting.”

Katz began our fermentation workshop with a lesson on sauerkraut. As we sliced cabbage and tossed it in a stainless steel bowl, he explained that long before Pasteur pinpointed tiny organisms—microbes—as the source of fermentation, cultures around the world had harnessed the power of fermentation to preserve food and improve its qualities (nutritive, alcoholic, or merely aesthetic). He revealed how wild colonies of microflora—whether yeast, bacteria, molds, or a combination—grow on food, changing its nature as the microorganisms ingest sugars or alcohols and excrete carbon dioxide, acids, or alcohols. The koji molds that spring up spontaneously on rice, for example, happen to be the same ones whose enzymes can turn cooked rice’s starch into sugars. Those sugars then feed yeasts that transform the rice into the alcoholic drink sake.

Katz defines fermentation as “the transformative action of microorganisms.” Often the microorganisms in question are bacteria. Take the sauerkraut we were making, for example. When chopped cabbage is combined with salt, squeezed to release its juices, and left to sit in the resulting brine, the various bacteria on the surface of the cabbage begin to grow, creating an acidic environment that transforms the flavor of the cabbage into the sweet-funky stuff we know as sauerkraut. This acidity also discourages the growth of pathogenic bacteria.

Similarly, bacteria can also change milk into yogurt and fresh cheese, and help turn fresh sausages into long-lived salamis. But bacteria are not the only microbes that transform our edibles: Yeasts consume the sugars in grains and fruits and excrete alcohol, creating beer, wine, and spritzy tonics. Sourdough bread is another yeast-bacteria collaboration: The gassy bubbles exuded by the yeast in the sourdough make the bread rise, while bacteria create a sour environment that gives the bread its characteristic tang. In Asia, countless foods are fermented, but beans account for a great many of them, from miso and soy sauce (which can take as much as three years to produce) to black bean paste and tempeh, a patty of soybeans bound by Rhizopus oligosporus mold spores. 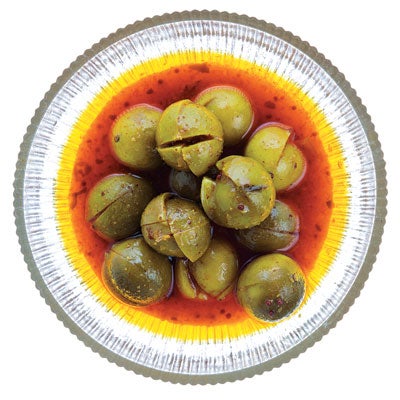 In the contemporary world, we have outsourced these various processes to industries both small and large, but Katz is a cheerleader for bringing them back to the home kitchen. “A lot of people have the idea that eating cultured foods can be healthy for them, and maybe they’d like to make sauerkraut or yogurt,” he says. “But they just have this fear of doing it because they don’t have a degree in microbiology.” True, there are some bacteria that can give you a gastrointestinal malady or worse, but we are reliant, too, on beneficial bacteria that inhibit the growth of the very toxins we fear.

In fact, live-cultured foods—foods that have not been pasteurized or have had the process of fermentation stopped in some other way—have long been associated with good health: They are believed to soothe the stomach and boost immune function. Yogurt sales, for example, have boomed in the past few years, in no small part because of yogurt’s “probiotic” promise to regulate digestion. Katz is intrigued by studies that suggest eating cultured foods is fortifying: He himself has been HIV positive since 1991 and strongly believes that his habit of eating cultured foods has helped him maintain—and sometimes, after health downturns, regain—his health, alongside his use of antiretroviral drugs.

Still, many home cooks are cagey about fermentation precisely because it does not always go smoothly. Harmless but ungainly molds can bloom on the surface of a long-aged project, and, yes, bottles can explode—as my class learned when we made a watermelon drink, soured and carbonated with a bacterial yeast culture called tibicos. Despite Katz’s urging to use plastic bottles, we ran out and decanted the drink into an old vodka bottle. In the morning there was shrapnel: The jug had exploded in the night, leaving shards of glass and sticky pink fluid all over the kitchen. We were lucky that no one was hurt. For Katz, such mishaps are part of the learning process. “There’s a certain amount of flexibility and improvisation that you need to have if you’re going to do these things,” he said, as we cleaned up the mess.

On the last evening of the workshop, there was a huge bonfire party where we ate goat from the farm and foods we’d made in the workshop, including tempeh, pickles, and lots of sauerkraut. After that sendoff, I came home from Tennessee and quickly started culturing with wild enthusiasm—making homemade Concord grape soda, crunchy pickles from baby vegetables I had bought at the farmers’ market, sourdough bread, and vinegar from leftover wine. My basement shelves quickly filled with jars and bottles, and I found true satisfaction in the mere act of nurturing them, watching their colors change, and ultimately tasting their transformation.

As a caregiver for millions of microorganisms, I have to admit, I’ve started to develop favorites. I’m darned proud of my kefir, whose culture keeps rolling along on my countertop. And my vinegar, well, it’s pretty terrific—I’ve got my eyes on an oak barrel to make my next attempt in. And I’ve kept putting up new batches of sauerkraut and cucumber pickles: Katz’s original fermentation revelation passed on to yet another fermentation convert.

See a gallery of fermented recipes »