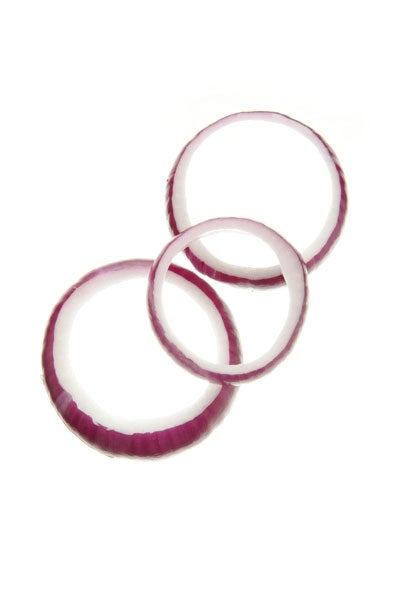 “I can easily make a whole meal of onion sandwiches,” James Beard wrote in his book Beard on Food (Bloomsbury USA, 1974), referring to raw sweet Spanish onions on homemade bread, with plenty of butter and salt. Indeed, many sweet varieties of onions are so mild that they are delicious in the raw, tossed into salads, layered atop burgers, and added to anything that can benefit from their bright, juicy crunch. But it’s not that sweet onions actually contain more sugar; they just have fewer of the sulfuric compounds that make other varieties sharp and spicy. It’s in the vegetable’s raw state that the variations between types are most apparent. Onion cells contain sulfuric compounds and store an enzyme called allinases; when the whole onion’s cell structure is disrupted by slicing and chopping, new, highly volatile sulfurous molecules are created, which give raw onions their bite and cause cooks to break out in tears. Some people believe that these harsh compounds can upset stomachs, and will salt and rinse, or simply wash onions before serving them raw or cooking with them. Kitchen scientist Harold McGee, in On Food and Cooking (Scribner, 2004), backs up that claim: He urges readers to wash sliced onions to rid them of sulfuric compounds that cling to their surface and become more intense with exposure to air.

See the article Roots of Flavor »