Every city is full of magnificent things to eat, things to buy, and things to do — you just need to find them. In our City Dozens series, local experts from around the world pick twelve can't-miss options for the culinarily-minded traveler. Check out all our City Dozens in the archive » 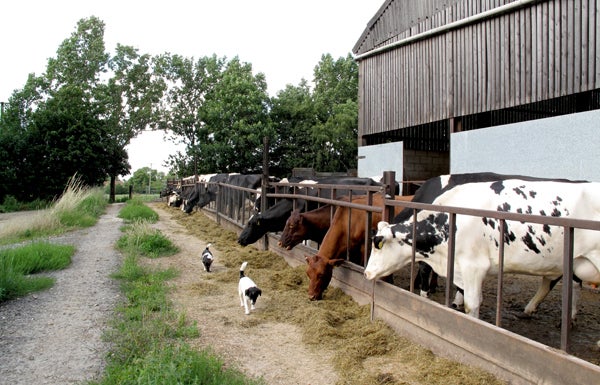 The English love a ramble, and there’s no better region for it than Lincolnshire—from the windswept North Sea coast to the rolling hills of the interior, criss-crossed with hawthorn hedges and punctuated by the occasional church spire. It’s always been a place apart. Vikings with names like Ivar the Boneless and Erik Bloodaxe invaded this part of England toward the end of the first millennium and eventually settled down and began farming; more recently, visitors have been few and far between. In no other county in England is such a high percentage of the population employed in agriculture, and thanks to that steadfastly rural character and Lincolnshire’s relative remoteness, local food traditions have quietly thrived in this part of the country even as they’ve fallen by the wayside elsewhere. That means plump pork sausages redolent of sage; savory pies with a filling of rustic pork terrine and a layer of luscious pork gelatin just beneath the crust; tremendous joints of grass-fed beef; smoked North Sea haddock; rich and robust farmstead cheeses; and a bounty of homegrown produce, both farmed and foraged.

SAVEUR deputy editor Beth Kracklauer first traveled to this part of England more than a decade and a half ago, and she’s been haunted by memories of Lincolnshire’s starkly, uncannily beautiful landscape—and its scrumptious pork pies—ever since. When she returned recently to report a story on the region’s butchering traditions, she also compiled this list of twelve reasons it’s worth making your way to this underexplored corner of the British Isles.

Jump to the interactive map »

Brackenborough Hall
I could happily spend a week or two entirely within the confines of this 800-acre estate at the edge of the Lincolnshire Wolds, a range of hills officially designated, without exaggeration, as an Area of Outstanding Natural Beauty. Brackenborough is a working farm and as good a place as any to tune into the rhythms of rural Lincolnshire. Just ask, and owner Paul Bennett will take you on a tour of the operation—he even let me ride along in the swather as it harvested rows of rapeseed—and if you spend any time at all at Brackenborough, you can’t help but get to know the herd of gentle Simmental cross cows that graze practically right up to Bennett’s front door. Careful ecological stewardship has fostered abundant wildlife on the property, too. Flora Bennett, Paul’s wife, invited me out at dusk to lie perfectly still in the grass and wait for badgers to poke their heads up out of their holes and scurry off into the hedgerow for a night’s hunting. A few years ago, the Bennetts converted the coach house on the property into apartments with impressively equipped kitchens, which they rent out year-round. I couldn’t wait to return to mine each evening to cook what I’d picked up in the nearby market town of Louth (see below), about a half hour’s leisurely hike away.

Yettin’
Lincolnshire’s local dialect—in which eating is yettin’ and meat is meyat—is as distinctive as its cuisine. Before embarking on an expedition to this part of the world, I’d recommend picking up a copy of Nobbut a Yellerbelly! A Salute to the Lincolnshire Dialect (Countryside Books, 2006). Written with equal parts regional pride and self-deprecating humor by BBC radio producer and Lincolnshire native Alan Stennett, it’s both lexicon and local history, with plenty of information regarding culinary one-offs like stuffed chine (a meaty cut of pork that’s cured, scored, and crammed with fragrant herbs) and plum loaf (a rich, eggy bread studded with dried fruit and best served topped with a slab of sharp cheese). Or, watch the engrossing two-part documentary that Stennett produced (available from www.primetimevideo.co.uk), in which he traces a year in the life of Robert Carlton, better known locally as Farmer Wink. You can also check out the Farmer Wink clips available on YouTube for an introduction to this utterly original (and near-incomprehensible) character.

Louth Livestock Market
Once upon a time, rural towns all over England held weekly livestock auctions that drew farmers and their animals from the surrounding countryside; you couldn’t help but know your producer, and the progress of meat from pasture to plate was a spectator sport. In the town of Louth (rhymes with “mouth”)—the only town in Lincolnshire and one of a dwindling number in the whole of England that continues to maintain a market of this kind—that’s still the case. Show up at 10 a.m. on a Thursday to watch the sheep being auctioned outside, then head inside for the cattle auction and try to figure out how the auctioneer keeps up with the flurry of barely perceptible gestures—a wink, a raised finger, a nod—the farmers use to bid on the parade of beasts trotted out into the ring. It’s a thrilling show.

An Old-Fashioned Market Town
Other English market towns have had the life drained from them by mega-supermarket chains, or they’ve become precious retreats for weekending Londoners. Meanwhile, out-of-the-way, unassuming Louth has simply carried on doing what it’s been doing since the Middle Ages: acting as a point of translation between town and country, farm and table. The butchers are particularly impressive. Lakings of Louth (33 Eastgate, Louth, Lincolnshire LN11 9NB; +01507 603 186; www.lakingsoflouth.co.uk) has been at it since 1908; make it your first stop. Meridian Meats (108 Eastgate, Louth, Lincolnshire LN11 9AA; +01507 603 357; www.meridianmeatsshop.co.uk) is run by Jim Sutcliffe, a young man intent on preserving local butchering traditions who deals in heritage breed cattle, sheep, and pork raised on his family’s and other local farms. And you mustn’t miss The Cheese Shop (110 Eastgate, Louth LN11 9AA, United Kingdom; +01507 60040; www.thecheeseshoplouth.co.uk), the place to acquaint yourself with outstanding farmstead cheeses like Lincolnshire Poacher and Cote Hill Blue (see below), both made nearby.

Melanie’s Restaurant
Chef Steven Legg and his wife and co-owner Aileen Legg are not natives of Lincolnshire, and they may be the only people in the town of Louth who didn’t ask me, “What are you doing here?” Like me, they came for the food, and they apply the zeal of the convert to local produce—always playing it low-key and letting the ingredients speak for themselves—and to regional classics like haslet, a rich pork meatloaf loaded with liver and other variety meats, which they serve with a tangy apple chutney. They also do a terrific Sunday roast with Yorkshire pudding and all the trimmings.

Cote Hill Cheese
In 2004, Michael and Mary Davenport were faced with a choice: sell their family farm, start farming on a larger scale in order to make ends meet, or add value to the milk they were getting from their heard of 70 Friesian, Holstein, and Red Poll cows. You can see why they wouldn’t want to mess with a good thing—their farm is pretty idyllic, a peaceable kingdom where Jack Russell terriers scamper around at the cows’ ankles. They opted to stay small, and so a cheesemaking venture was born. Before long, judges at cheese competitions around the country found that the Davenports had a real knack for this business, and their Cote Hill cheeses began gaining acclaim far beyond the local farmer’s markets. Cote Hill Blue is their masterpiece, a sumptuously creamy, Camembert-like cheese run through with bracingly bitter veins of blue mold.

The Five Sailed Windmill
Sooner or later, any trip through the English countryside is bound to involve a cream tea complete with scones, clotted cream, and jam. So much the better if the scones are made from whole wheat flour ground by the action of windmill sails swooping directly overhead. You can take a guided tour of the village of Alford’s very pretty windmill—geeks on the subject consider it among the finest in Britain, an engineering marvel—or simply park yourself at a picnic table in the tea garden below and succumb to the hypnotic motion of its sails for a few pleasant hours.

Uncle Henry’s
I’m not sure what Lincolnshire’s coat of arms looks like, but if it doesn’t prominently feature a pig, it should. What’s more, a pig farm should be on the agenda of any visitor interested in really understanding the county’s foodways. Farmers Meryl and Steve Ward, who raise arable crops as well as Hampshire Breed pigs, have made it easy to do at Uncle Henry’s, with farm tours and public education programs, a cafe, and a sprawling farm shop set in a converted barn, stocked to the rafters with the fruits of their labors and their neighbors’. I was wowed by the butchery, with its range of excellent porky products—sausages, house-cured hams and bacons, various cuts of pork and organ meats—that do honor to the happy pigs cavorting on the farm outside.

Doddington Hall & Gardens
A house like Doddington—a sprawling Tudor pile just outside the county town of Lincoln, on acres of farmed and meticulously gardened land—requires no small amount of business savvy to maintain. In recent years, the property has evolved to include an extensive farm shop, a restaurant, and a more casual cafe. But what really blew me away was the two-acre Victorian kitchen garden, restored to its original glory a few years ago, with espaliered fruit trees zigzagging along the garden walls and row upon row of edible crops. I’ve never seen such a spectacular example of this kind of garden, designed to sustain the residents of the great house as well as the staff; at the height of summer, when I strolled up and down the rows, the place hummed with life.

Atkinsons Smoked Fish
The gritty port town of Grimsby, on the North Sea, wouldn’t match up with most visions of rural English life, but, historically, Grimberians (yes, that’s what they’re called) have harvested one of Lincolnshire’s most important foodstuffs: fish, and above all haddock. The oldest local haddock smokery still in operation is Atkinsons, run by the family who founded it using the same cold smoking methods and the same brick chimneys they’ve always used. Haddock’s flavor is sweeter than cod’s and other flaky white fishes’ to begin with; once smoked in this way, it has a delectable balance of sweetness and smoke, and a firm and succulent texture. A few years ago, the latest generation of Atkinsons to enter the business opened a fishmongers called The Fishwife, a gleaming retail outlet tucked into a corner of the hulking old smokery selling all kinds of fish, both smoked and fresh.

Fishing Heritage Centre
I’ll confess to having a particular weakness for dioramas. But who could resist this museum’s life-size scenes of fishing life drawn from Grimsby’s maritime heyday, in the middle of the last century? You can make your way down a shadowy portside street, take the helm of a ship, and even stand by in the living room of a fisherman’s wife—recreated down to the doilies on the armchairs—as she’s informed of her husband’s loss at sea. They really don’t sugarcoat the story they’re telling, a vivid tale of risk, profit, and occasional calamity, all in the service of putting fish on the plates of a nation.

Leon’s Fish Restaurant
Having weathered the seafaring saga at the Fishing Heritage Centre, you’re bound to be craving fish and chips in the worst way. Fortunately, a classic purveyor of them lies a short walk from the museum’s entrance. Though there are various seafoods on offer at Leon’s, haddock is the appropriate choice here, filleted, battered, and fried into a perfect golden crescent, nestled up against a pile of thick-cut fries and garnished with a side of bright green, velvety-luscious mushy peas.

SAVEUR deputy editor Beth Kracklauer first traveled to Lincolnshire more than a decade and a half ago, and she’s been haunted by memories of Lincolnshire’s starkly, uncannily beautiful landscape—and its scrumptious pork pies—ever since.