Lavender adds sweet flavor and beauty to many dishes 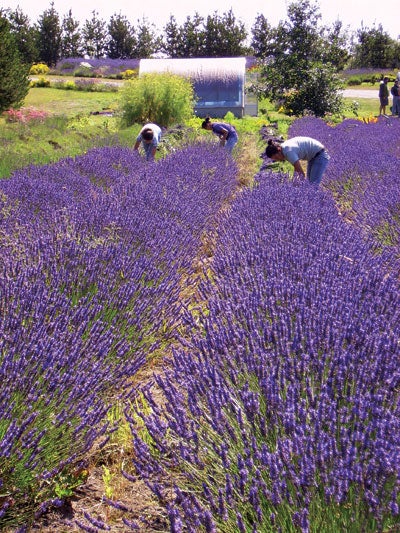 In late afternoons in high summer, the fields of Whidbey Lavender Farm on Washington State’s Whidbey Island give off a purple radiance, and the breeze of Puget Sound lifts the floral scent toward the cedar forest. So it is no wonder that the women writing poetry and fiction in the cottages of the nearby Hedgebrook writers’ retreat come to walk among the lavender when their day’s work is finished. That is how I came, by way of a deer trail, to the fields planted by M.C. and Kay Kang. The couple started their first lavender field in 2005, after falling asleep in a bedroom scented with the just-picked blossoms at a friend’s lavender farm in the mainland town of Sequim the previous year. Along with Sequim, Whidbey Island lies within a rain shadow, a lavender-friendly microclimate protected from too much precipitation by the Olympic Mountains. Most of the Kangs’ plants are the fragrant Grosso variety, used for bath oils and perfumes, but they also grow several kinds of English lavender—sweet-smelling, low-camphor plants that are best for cooking.

It was this culinary lavender that interested me as I stole beneath the rafters in the Kangs’ cedar drying barn. Hedgebrook’s chefs had befriended the Kangs and were making sorbet and salted cookies flecked with their blossoms, but I soon learned that English lavender has a long history in the kitchen. Native to the Mediterranean, lavender was, in all likelihood, brought to the British Isles in the second century by the Romans, who used it for washing and bathing, as well as for cooking and winemaking. A member of the mint family and a relative of thyme, it lends floral and herbal notes to dishes. Today, farmers in France send their lambs to graze among the blooms, and French grandmothers cut lavender from roadsides for their kitchens. I followed suit, adding blossoms to creme brulee, threading shrimp onto sprigs for the grill, and tossing the sweet dried herb with potatoes for roasting.

The Kangs don’t sell their lavender, preferring to give it away, but the nearby Lavender Wind Farm does. I like to hang a bunch of theirs in my kitchen, where its fragrance transports me back to Whidbey Island’s fields.