Fruits of the Forest 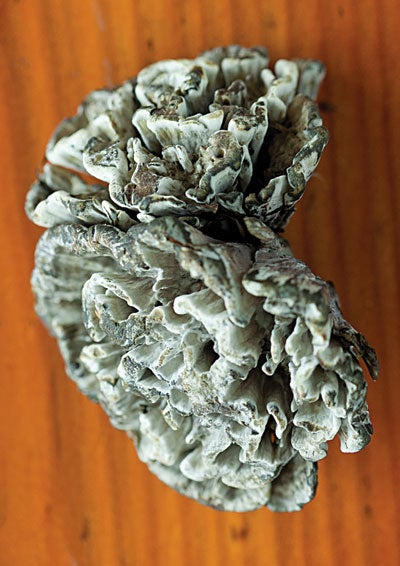 The ganba, or dried beef mushroom (Thelephora ganba jun), like many mushrooms in China, takes its name from another food it is thought to resemble. It is deeply savory with a pleasantly chewy texture. This species is found only in sandy soils under pine trees, and only in Yunnan. It has a pungent aroma and flavor, like concentrated pine, and is typically served shredded and fried. Back to Season of Plenty: Yunnan's Foraged Mushrooms ». Ariana Lindquist
SHARE

Mountainous and remote, the Yunnan Province has been spared some of the human and environmental pressures that have wiped out native mushroom species in other places. It is one of the most biodiverse regions on the planet, home to some 700 endemic flowering plant species; 40 percent of China’s medicinal herbs; animals ranging from China’s last herd of Asian elephants to wild Tibetan yaks; and more than 800 varieties of edible mushroom, of which the following represent only the tiniest sample. Many of these grow in forests in North America as well; if there is a forager at your local farmers’ market, you might come across them. Others can be found in dried form in Asian grocery stores.

See a guide the to Yunnan’s wild mushrooms »