An American soldier falls for the food, and the people, of Iraq. 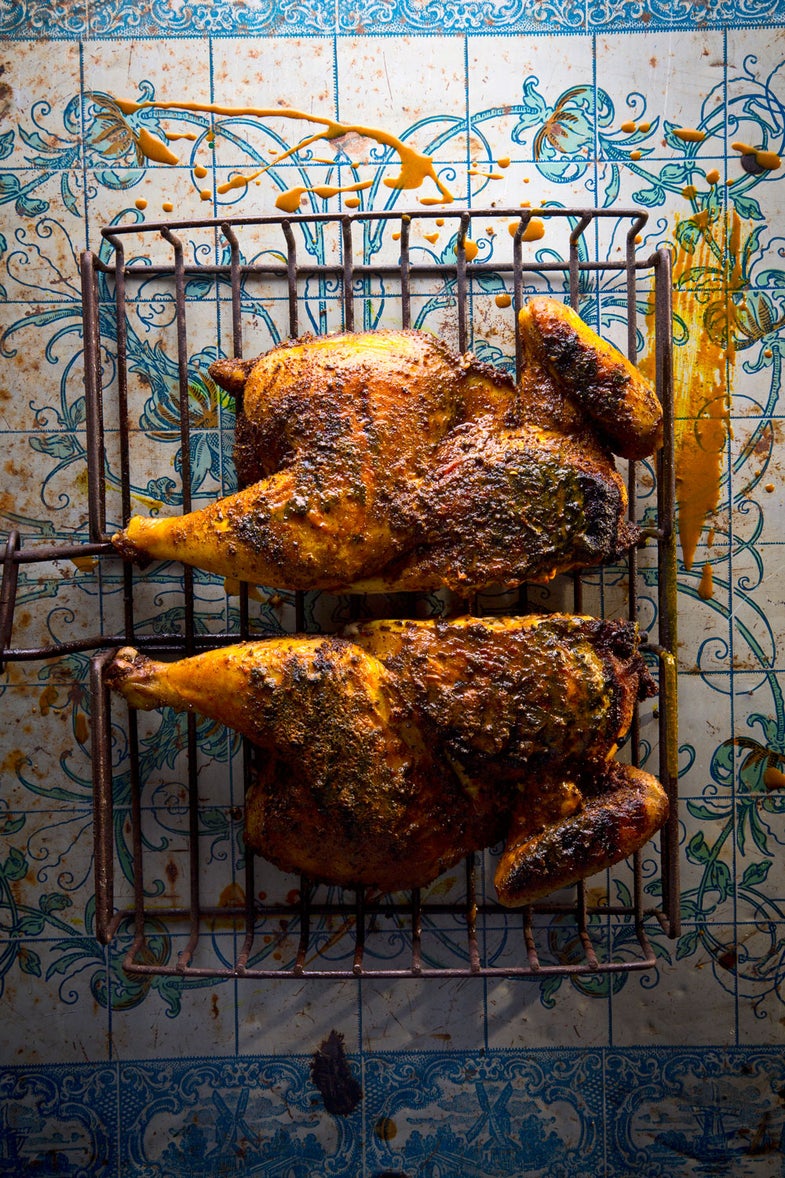 This fragrant spice-rubbed grilled chicken was a favorite of former SAVEUR Assistant Editor Felicia Campbell when she was deployed to Iraq. Todd Coleman
SHARE

I landed in Kuwait on February 28, 2003, less than a month after my 19th birthday, as a private first class with the rest of the 101st Airborne Division. Two years earlier, after an aimless semester of college during which the Twin Towers fell, I’d filled out the information request form on GoArmy.com, looking for some direction in my life. I was thrilled when we were deployed to Iraq. It felt like my chance to do something important.

I was among the first wave of American troops in Iraq; it would be months before military living quarters and chow halls and roads were in place. That lag time—and the absence of basic comforts like food and water—set my life on a path I couldn’t have imagined. It fueled a hunger in me for something pleasurable and real, and drove me to cross the neatly drawn military line between “us” and “them.” It was a journey I made stomach first.

We were staged at Camp Udairi, a tent city in the desert on the Iraq-Kuwait border. Nineteen days after we arrived, a TV was wheeled into our tarp tent. President Bush appeared onscreen and said, “The enemies you confront will come to know your skill and bravery.” The war was on. We crossed the border under fireworks of Scuds intercepted by Patriot missiles and drove toward Baghdad. We pushed north hundreds of miles across a sea of sand, and when we stopped, we slept outside on cots where vicious biting flies woke us every morning. Until suppliers from the base in Kuwait could catch up with our convoy, we each made do with one MRE (Meal Ready to Eat) and two liters of water a day. Just enough to survive.

All the MREs had the same basic components: a squeeze packet of peanut butter or cheese-flavored spread, tasteless crackers or flatbread, stale Skittles or cake, and an entree pouch. To “cook” the entree, we slipped the pouch into a plastic sleeve outfitted with a water-activated heating pad, added water, and closed the sleeve quickly. A violent boiling would shake it for a few minutes, then fizzle out with a nauseating chemical gasp. Entrees ranged from the fear-inducing Country Captain Chicken, a breaded gray lump, to the coveted Hamburger Patty. The latter came with barbecue sauce and was believably beef-like. We attempted to make other meals palatable, crushing crackers over pasta for texture and spreading peanut butter on dry pound cake. But mealtime on that convoy remained a disappointment.

Eventually, the desert gave way to patchy grassland. We began to see people: women in flowing black garments, men herding goats and working in the fields. Our commanders had told us we weren’t to trust any of them, so I kept my head down and my gun at the ready. We bypassed Baghdad, continuing north to a former Iraqi air force base in Nineveh. Qayyarah Airfield West was a tumble of bombed-out buildings stripped of electrical wire and filled with debris, but to us they looked like palaces; they meant no more sleeping outside under tarps. I could see foothills in the distance, and the sun was softer here. Most important, there were rumors of real food. One rubble heap was being turned into a dry goods shop that was also going to sell hot meals.

The grunts from the 327th Infantry Regiment’s 1st BCT “Bastogne,” whose headquarters were across the road, had tagged the would-be shop with their insignia, a cloverleaf, so the place became known as “The Club.” Pretty soon chips, sweets, and Coca-Cola cans adorned with squiggly Arabic lettering were lining its shelves. In a courtyard in the center of the building, a collection of plastic tables and chairs were set up like a restaurant, the menu limited to grilled chicken and pita. The Club was run by Iraqis. This wasn’t a surprise at Q-West—about a month after we arrived, they started letting Iraqi nationals onto base to deliver water and other supplies—but there was always a divide between the Army’s official and unofficial lines on them. The officers in Washington claimed that we were helping rebuild the Iraqi economy by supporting new businesses. But on base, as soon as the shop opened, the warning signs went up, painted letters on plywood boards: “Unauthorized eating establishment: Eat at your own risk. It is against military regulation to intentionally harm your body. Use discretion when consuming unsanctioned food.”

So I was nervous as I stood in line at The Club, my weapon slung over my back like a messenger bag, but I was also tired of eating tasteless rations. When I got to the front and saw the handwritten sign that simply said “$2” and handed over the money, I didn’t look up at the owner of the brown hands that passed me a Styrofoam plate lined with thick, soft, warm flatbread topped with half a chicken.

I was thankful that the food looked straightforward and safe, delicious even. The skin was crispy, charred-brown, and shiny with fat. I tugged a piece off the bone. It was as moist and flavorful as the rotisserie chicken my mom used to buy at King Soopers back home in Denver. But it was smokier, more complex, and bursting with flavors unfamiliar to me. I wrapped pieces of meat in the pillowy bread that was stained with grease from my fingers. I ate and ate, the flavors of cardamom, coriander, fenugreek and turmeric, cloves and allspice, pepper and rose hips striking my palate, many of them for the first time. They were the tastes of what Iraqis call bahar asfar, yellow spice, brought centuries ago from South Asia. They were flavors I grew to know well, and to crave.

I wolfed down my chicken and considered ordering more for later. But I didn’t; as satisfying as it was to taste fresh food, something was missing. Unlike the countless times I gobbled an MRE solo, I suddenly longed for someone to sit and eat with me. The next evening I asked three other girls in my platoon to join me; we had spent little time together until then, but that marked the beginning of many nights we spent at The Club. We’d devour the chicken, followed by a packaged cake bought from the shop, and when I started requesting the tea I saw the Iraqi shopkeepers drinking, they smiled and brought it to us in their own chipped mugs, served extra sweet, with leaves swirling in the amber liquid. Despite the kindness of those men, I still didn’t trust them or look them in the eyes. Ignoring our hosts, we would laugh loudly and tell dirty stories, smoking and drinking their tea into the night.

Six months in Iraq and we had given up dreaming about going home; eight months, and Q-West had become home. The girls and I made our way toward the familiar glow of The Club through the hot summer nights and cold autumn ones. We were there during weeks of boredom and weeks when mortars rained down as intermittently as the winter showers. Even after the opening of the long-awaited chow hall, we returned every Friday for cake and tea. And I would go whenever cravings for the chicken hit me. As a soldier, I ate robotically, but in The Club, I dined like a human.

Over those weeks, I began to do a dangerous thing for a soldier: I began to feel and I began to see. I finally started looking at the Iraqi men that served me—young, bearded guys in checked turbans. I thought about the people I had met on patrols: the women in the villages who had embraced me and kissed my cheeks as their children looked up from their sides; the professor who asked if we were going to free Iraq from Saddam or simply take his place, and the knot of guilt I brushed aside as I told him I didn’t know. I thought about the people brave enough to be kind to me even as I wielded an M16-A4, prepared to turn it on them. Yet it had taken me countless cups of tea to simply meet the eyes of the men pouring them.

Nearly a year after crossing the Iraq-Kuwait border, we were told it was time to go home. Things at Q-West were hectic as we scrambled to move out, and my trips to The Club became less frequent. On one of our last nights, I finally met the owner, a fat, boisterous man with a close-cut beard who tried to tell me about his wife and kids in a broken mix of Arabic and English. I searched for the word for “thank you” but wasn’t able to remember it.

In the decade since then, I have learned the word for thank you—shukran—along with thousands of others. And my life gained the direction that I was seeking back when I enlisted. I went to graduate school for food studies and became a writer with a focus on Middle Eastern cuisine. Though I have since eaten many meals in the Arab world, my cravings remain unsated. I continue to look for Iraqi chicken, not for the sumptuous flavors, but because it reminds me of that time in my life and those gracious men from The Club. I know I’m unlikely to ever see them again, but I still long to thank them for feeding me. With that simple grilled chicken, they nourished my humanity, so often the first casualty of war.