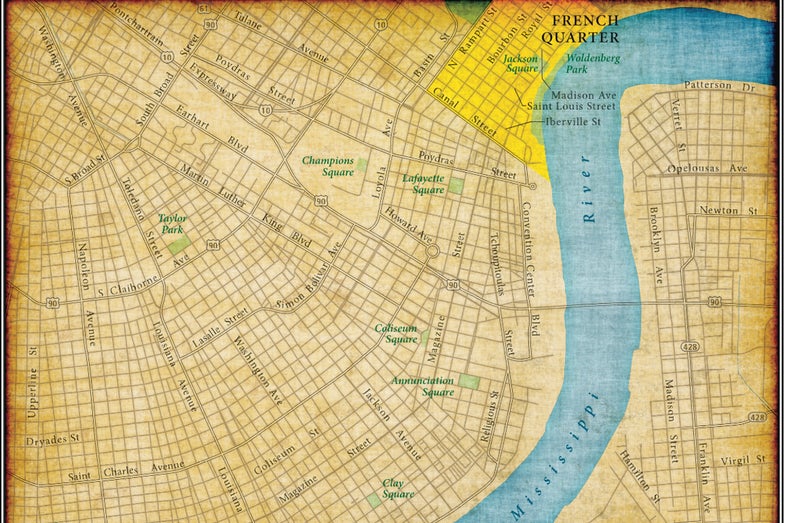 Founded in 1718 by French colonists who saw the promise of commerce in this soft, curving land near the base of the Mississippi River, New Orleans has always been a city of entrepreneurs and idealists, the gutsy and the fanciful. Spain arrived. And Africa. Sicily, the Caribbean, and others. The creative interplay between cultures gave birth to the jazz, Mardi Gras, and incomparable cuisine that make this place extraordinary. Hurricane Katrina dealt a blow in 2005—the current population (around 360,000 in 2011) falls far short of prestorm numbers. Yet, from the historic French Quarter at the city’s heart to the tree-shaded boulevards of Uptown to its west, the streets of shotgun houses in the Bywater to the east, the Treme to the north, and beyond, the music remains strong. The pageantry is spectacular. And the classic restaurants—Creole, Cajun, and otherwise—make food that’s as delicious and vibrant as ever. Here are some of our favorite legendary places to eat, drink, and stay in New Orleans.

Galatoire’s
The lion’s share of old-school New Orleans dining rooms is located in the French Quarter, where the zing of paprika-laced shrimp remoulade punctuates the Friday lunch at the centenarian Galatoire’s.

Antoine’s
Antoine’s, the originator in 1889 of oysters Rockefeller, spoils patrons with butter-soaked seafood like trout Pontchartrain topped with lump crabmeat.

Arnaud’s
Between courses of Pernod-spiked escargots en casserole and buttery speckled trout meuniere at Arnaud’s, diners may tour the restaurant’s Mardi Gras museum, a spectacle of scepters and gowns.

Brennan’s
Nearby Brennan’s is most beloved for its multicourse breakfasts (cocktails encouraged) and flaming bananas Foster.

Tujague’s
Rounding out the French Quarter’s quintet of classic Creole restaurants, Tujague’s is the biggest stickler for tradition, offering only a six-course table d’hote menu at dinnertime, with specialties like brisket in spicy Creole sauce; its standing-room-only bar serves up red beans and rice on Monday nights.

Dooky Chase and Ye Olde College Inn
Gumbo remains a constant in the city’s classic restaurants, high-end and hole-in-the-wall alike. A gumbo excursionist can eat for days without ever tasting the same gumbo twice, from the version made with seafood and chaurice sausage (a Creole chorizo) at Dooky Chase, the restaurant that desegregated fine dining during the Civil Rights era, to the turkey and andouille gumbo at Uptown’s beloved Ye Olde College Inn.

Mr. B’s Bistro
Mr. B’s Bistro in the Quarter is famous for its gumbo ya-ya. The dish, whose name is Creole slang for “all talking at once,” is chockful of chicken and sausage in a dark long-cooked roux.

Upperline
A few miles uptown at Upperline, the signature is a rich duck and andouille gumbo.

Brigtsen’s
Farther along, in Riverbend, Frank Brigtsen uses file (cured and ground sassafras leaves), a seasoning and thickener adopted from the Choctaw Indians, in a refined gumbo made with rabbit at Brigtsen’s.

Commander’s Palace
You never know what style of gumbo might be in the pot at Commander’s Palace, the Garden District Creole grande dame, which offers a rotating selection of the Creole soup, along with originals like bread pudding souffle.

Bon Ton Cafe
The gumbo is good, but the crawfish bisque is the soup to try at the Cajun restaurant Bon Ton Cafe.

Tommy’s Cuisine
Tommy’s Cuisine, in the Warehouse Arts District just west of the Quarter, features a full slate of traditional Creole dishes such as oysters Bienville and crabmeat Sardou.

Victorian Lounge Bar
_3811 Saint Charles Avenue (504/899-9308)_The city’s storied hotels and restaurants are among the best places for a well-crafted drink. There is no more picturesque spot for enjoying a Sazerac, the city’s official cocktail made from rye whiskey, bitters, and liquorice-flavored Herbsaint or absinthe, than the front porch of the Columns Hotel in the Garden District, thanks to its Victorian Lounge Bar.

French 75 Bar
Another new-wave bartender with old-timey sensibility, Chris Hannah turned the French 75 Bar at Arnaud’s into an international destination by perfecting old favorites and concocting updated New Orleans-inspired ones like the Moviegoer, gin blended with orange curaçao, Averna amaro, and lemon.

Old Absinthe House
At the Old Absinthe House, you can sample all manner of Big Easy cocktails—brandy milk punch, Ramos gin fizzes, mint juleps—as well as admire the marble fountains that bartenders once used to drip water over sugar cubes into absinthe.

Blue Nile and The Spotted Cat
Frenchmen Street in the Faubourg Marigny east of the Quarter is the place to go for a nightcap and its natural New Orleans pairing: music. At Blue Nile, you might catch country bluesman Washboard Chaz or the raucous Big Sam’s Funky Nation, while The Spotted Cat features all kinds of jazz.

Vaughan’s
In the Bywater, the iconic trumpeter and singer Kermit Ruffins packs Vaughan’s every Thursday night, serving barbecue and red beans as a lagniappe.

Tipitina’s
Uptown at Tipitina’s , Sundays are usually reserved for a Cajun-style fais do do, or dance party.

Roosevelt Hotel
The restored Roosevelt Hotel, where Louisiana’s notorious Depression-era governor Huey Long allegedly had his own suite, still offers some residential-size accommodations. The Sazerac Bar, with its controversial Paul Ninas murals depicting the Old South, is a fancy setting for the namesake cocktail or a Ramos gin fizz.

Hotel Monteleone
The Hotel Monteleone boasts the Carousel Bar, a revolving bar in the round. Hotel suites are named for writers who loved the place, including Eudora Welty, Tennessee Williams, and Truman Capote.