Why strawberry farmer Jim Cochran made flavor his mantra

On a clear September morning, I set out for the source of California's most delicious strawberries—quite a trip if you take the scenic route. South of San Francisco, you trace the cliffs of Devil's Slide until the two-lane highway—and your grip on the steering wheel—relaxes. A couple of hours later, just north of Davenport, you see a 1950s pickup truck on the side of the road with hand-painted signs declaring HERE LIES SWANTON BERRY FARM. It's a storybook scene: a view of the Pacific, a farm stand stocked with fresh baked pies. But read through the news clips on the wall, and a weightier tale emerges. When Jim Cochran founded Swanton, in 1983, he was just another hippie farmer. But he became the man who unlocked the secrets of growing strawberries without pesticides and paying workers a fair wage to do it.

When I visit Swanton, late in strawberry season, I find Cochran at the farm stand. With his shock of white hair and scuffed sneakers, the effect is more "dad on weekend" than "agricultural pioneer." But while Cochran may keep a low profile, his strawberries have achieved celebrity status. Each summer, they're transformed into scarlet coulis and compote at Berkeley's Chez Panisse; they fly off the tables at the nine farmers' markets and 34 Whole Foods stores where they're sold (always in open containers, not the typical plastic clamshell boxes, so that shoppers can smell their heady perfume). Wherever Cochran's berries are available, they're never more than a few hours' drive from where they're grown. The delicate fruits, which workers pick ripe and never refrigerate, lest it dull their flavor, would never survive a trip much longer than that.

It was flavor that ended up being the key to growing organic strawberries—a feat considered impossible back in the early 1980s, when Cochran was working as the business manager for a cooperative of strawberry farms. Every day, he drove south from his home in Santa Cruz to the Salinas Valley, where he helped small growers, most of them Mexican immigrants, compete against industrial farms. The farmers he worked with relied heavily on toxic fumigants, like the now-banned methyl bromide, which killed off the fungi, insects, and weeds that are particularly problematic in strawberry growing. Until the use of fumigants became widespread, in the 1960s, commercial berry production required crop rotations so diverse that they made industrial-scale growing impossible. Fumigants fueled the berry industry's boom in the '60s, and they were adopted on farms of all sizes.

The truck at the entrance to Swanton Berry Farm

Cochran saw enough close calls with pesticides and fumigants—he himself fell ill a number of times— to have an interest in leaving them behind. Then, one weekend, Cochran took advantage of a few slow days at work and drove to Napa Valley with his girlfriend. He was, he says, "enthralled with the complexity and the amount of thought that went into growing a particular wine grape." Listening to vintners wax poetic about the interplay of flavor and everything else—soil, water, nutrients, minerals—Cochran grasped that by prizing flavor, they added value to their product. If you could do it with grapes, why not berries? And if you could charge more, couldn't you make up for the higher cost of growing without chemicals?

He tried to persuade the cooperatives he worked with to test his theory, but the answer was always the same: People want big, red berries, and they don't care how they taste or how they're grown—why risk it? Cochran wasn't convinced. "I thought, Gee, I wonder if these guys are missing the point," he says. "Because everyone I know loves a really delicious strawberry." So Cochran and a partner rented four acres of bottomland soil in Swanton Valley, not far from where he now farms. Half the land went to conventional cultivation, fumigants and all. The rest was used to test Cochran's conviction that berries could be grown without all those chemicals.

The first few years were rough. The microclimate was a bad match for strawberries, and money barely trickled in. Cochran paid the bills by picking up construction work for $6 an hour. He and his partner split. But slow as it was, Cochran was identifying effective practices through trial and error that would eventually revolutionize organic farming. "Once you start thinking about flavor, all sorts of things start occurring to you," he says. He selected a low-yielding variety, the Chandler, which, unlike varieties bred for industrial-scale farming, retains a high proportion of volatile oils that give it an alluring and intense strawberry scent. He wagered that the Chandler's mix of concentrated sweetness and fragrance would justify the higher price he'd have to charge. He found fertile land and enriched it with compost, reasoning that, as with wine grapes, the flavor would be more complex with more nutrients in the soil. And he pored over old agriculture texts, experimented with crop rotations, and—in partnership with now-renowned University of California, Santa Cruz, agro-ecologist Stephen Gliessman, a neighbor from the early days— found that rotating his fields with broccoli could strip the soil of disease. He and Gliessman also introduced a practice used only in greenhouses at the time: using one kind of mite to kill another with an appetite for berries.

Workers stretching in the fields

Thirty years later, thanks to Cochran's work and Gliessman's published research, those methods have spread to the fields of the nation's biggest berry producers. Driscoll's, the industry leader, grows organic strawberries across California, Florida, and Mexico using techniques Cochran and Gliessman developed. Cochran's gamble—that consumers really are interested in how their berries taste, and how they're grown, too—has paid off far beyond the boundaries of his own operation.

Even today, cochran continues to challenge conventional wisdom about how a farm has to run. Eliminating pesticides and prioritizing flavor have given him a business reason to rethink labor, too. Most growers pay temporary workers to strip the plants as quickly as possible; it's all about high yield. But with lower yields and delicate fruit, Cochran couldn't afford to lose berries to manhandling; he needed workers who would pick carefully. But above all it was a moral question: "If I'm doing something good for the people who buy strawberries, why wouldn't I want to make things better for the people who grow them?" So Cochran paid a better wage and started growing other crops that ripen at different times so that he could employ a regular staff year-round. Then, in 1998, Cochran made organic farming history a second time, when he invited the United Farm Workers to his fields, making Swanton Berry the nation's first unionized organic farm. Today, his workers have health insurance, paid vacation, and an employee stock ownership plan. This way, says Cochran, he has assurance that his fields are tended by a staff of agricultural professionals. And he gets a marketing boost among conscious shoppers by putting the union label on his package.

After a few hours of talking with me, Cochran hands me off to his farm manager, Sandy Brown, for a tour of the property. As the sun stretches toward noon, I stand in a field of deeply furrowed rows sided with black plastic, each one topped with an unruly Mohawk of plants. It's three weeks before the season's end, and plump, ruby orbs are scattered among the leaves. What strikes me above all is the field's perfume, rising thick and sweet; those scratch-and-sniff stickers from elementary school, I think, actually got it right. Unsure of protocol, I glance at Brown, who smiles and plucks a couple of berries from the tangle of green at our knees. "Here, try one," she says.

The berry yields gently, like a ripe pear, and then I see what all the fuss is about: a clean, pure taste of strawberry that flirts with tartness and holds a trace of mineral brine. It immediately brings to mind the last thing Cochran said to me before I left him. We'd been talking about how the farm has grown and how proud he feels to have a staff on which he can depend. He drew a spoonful of jam from a tasting station nearby and spread it on an animal cracker. "One of the benefits is that now I get to do the really important stuff," he said, "like tasting." 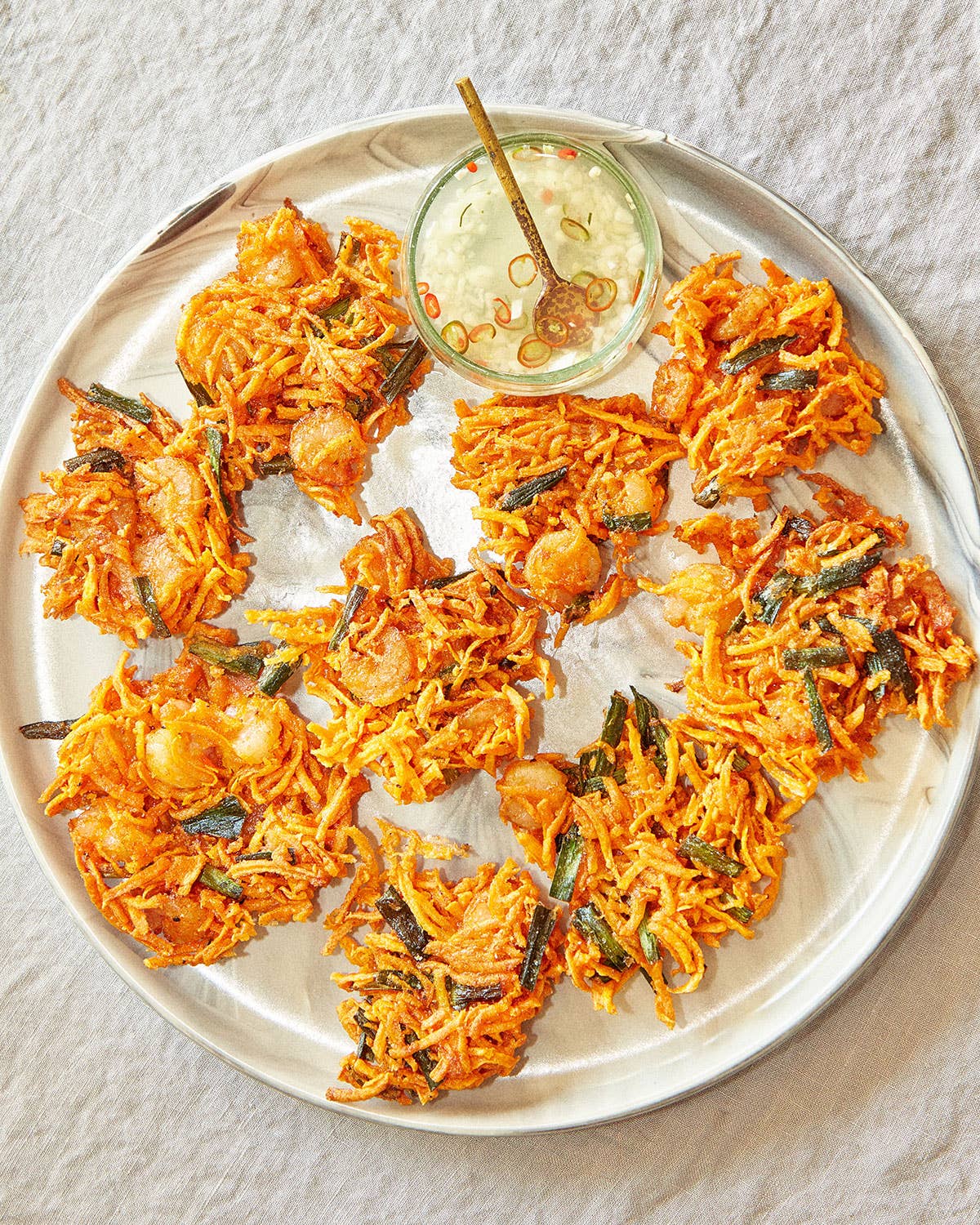