The Beauty of it All 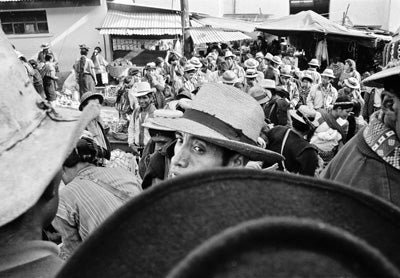 The last time I was in the main market in Tbilisi, the capital city of the Republic of Georgia, an elderly woman selling honey caught sight of me taking pictures and waved me over to her stall. She gestured for me to hold out my palm, and onto it she placed a glistening chunk of fresh, gooey honeycomb. At first I wasn’t sure what to do—eat it whole? Sample a small taste and toss the rest? In the end, I just popped the entire thing in my mouth and licked the honey off my hand, laughing as others laughed along with me. In the next hour, as I made my way around to the other stalls, that honey was followed by samples of goat cheese, olives, pomegranate seeds, cheese-filled breads, nuts, fruits, and much more.

I spend a lot of time hanging around food markets, and not just for the handouts. To me, markets are some of the most enlightening, energizing, and generous places in the world. When I was a kid, I used to shop with my mother at the ByWard Market in Ottawa, and I remember that “Aha!” moment when I realized that the carrots and potatoes and turnips had been pulled from the earth and hauled into the market by the man behind the table. As a teenager in Paris, I used to wander around the old Les Halles market (may it rest in peace) in the early hours of the morning, soaking up the dizzying smells and sights as flowers and fish and huge slabs of meat were rushed from here to there. I loved the fabulous intensity, the vividness of it all.

But it wasn’t until I started traveling the world to photograph and research traditional foods that I really became a market junkie. Where else can you connect with people without the aid of a common language, and bond with them over a shared love of honey? When I’m new to a place, the first thing I do is to seek out its markets. They’re my way of figuring out where I am and how things work there. What kinds of fruits and vegetables grow nearby? How do people reap profit or pleasure from those foods?

The most surprising thing I’ve learned is this: for all their diversity—whether it’s a city-size souk in Cairo or a single merchant selling hunks of salt at a crossroads in Tibet—markets around the world are all share some common and essential traits.

For example, all markets are theaters. The cry of a street hawker; the practiced spiel of a produce vendor; the haggling and joking—these are arts practiced the world over.

All markets are places of hard work. I’ve watched haulers in southern India carrying impossibly huge, fruit-laden banana stems to market on their shoulders. I’ve seen Zapotec women in a Mexican village walk to market with live turkeys tucked under their arms. A few months ago I spent several days in the small village of Hsipaw, in northern Myanmar. My first day there I got up before dawn and headed out to find the morning market. As I got close, I could see candles flickering, little darts of light. The street was crowded. I paused to buy sweetened black sticky rice from a woman in a conical hat and ate it as I walked along. People threaded their way among the vendors, pausing and crouching occasionally to look closely at the ingredients arranged carefully on the ground, a candle or two illuminating each small display. As dawn arrived, the vendors pinched out the candles, packed up, and carried everything into another market space by the river, where, item by item, they unpacked again and set up for a second time in the radiant morning light.

Markets are places of beauty. A sprig of jasmine is hung by a fishmonger’s stall to perfume the air; a spray of pink blossoms is laid by a pile of garlic to lure our gaze. I see with fresh eyes in a market: I notice the curves of a squash, deep yellow and enormous, in Rajasthan. In the shiny skin of a fish at a sun-drenched market in Puglia, Italy, I see colors I didn’t know existed.

Markets are places of commerce: vendors need to earn money and shoppers need to buy food, and from that reciprocity springs a world of choice. But more than that, they are cradles of human relationships. When I make my daily trip to Kensington Market, a shop-lined set of streets near my home in Toronto, I’m there to stay connected with people as much as to buy things. I stop in at Cheese Magic, and my friend Ping gives me a taste of a creamy blue cheese I haven’t tried before. We talk about the cheese, our city, our families. I drop by 4 Life, a natural foods store where Potz, the owner, sells me some pale blue-green organic eggs and chats with me about the farmer who raised them.

Markets drive the rhythms of life. Some years ago, I arrived in Phnom Penh, the capital of Cambodia, shortly after an attempted coup in which Hun Sen, the prime minister, forced a political opponent to flee the country amid violent street skirmishes. Glass shards littered the pavement, and many foreigners had left, but each day before dawn the vendors still set up their stalls. There was food to be sold, and people came. It was an assertion of normalcy in a time of change and fear.

When it comes right down to it, of course, markets are about food, about the pleasures of cooking and eating. As we browse, we visualize what we will make once we are home in our kitchen, propelled by tastes along the way: a bite of mushroom quiche at a market in Provence; a taste of grilled sai krok sausage in northeastern Thailand; a cup of sweet mint tea in a Moroccan souk.

One day I stopped to buy some tortillas from a woman in the main market in the Mexican city of Oaxaca. She was selling the large, delicate corn tortillas known locally as blandas. I asked her how she managed to roll them so thin. We started to chat, and after my third or fourth question she said, “I will teach you. When can you come to my village?” Two days later I found my way to her home. As a couple of her grandchildren played nearby, she patiently showed me how to flatten a small amount of corn masa in a tortilla press and pat it out to a much larger disk, delicate as a handkerchief. The experience reminded me of another truth about markets: some of the most rewarding transactions are ones in which no money changes hands. —Naomi Duguid, author of  _Beyond the Great Wall: Recipes and Travels in the Other China (Artisan, 2008)_