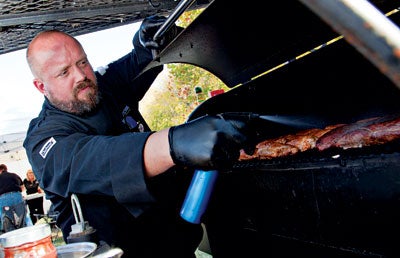 Welcome to the world of competition barbecue, a sport, an obsession, and a whole way of life for a growing number of cooks

It’s 11 a.m. and eerily quiet. Here, in the grassy holler behind Main Street in Lynchburg, Tennessee, 76 cooking teams from 16 countries have set up camp to compete in the Super Bowl of smoked meat: the 22nd Annual Jack Daniel’s World Championship Invitational Barbecue, known to those on the competition barbecue circuit simply as “the Jack.” Their RVs and tents are lined up in neat rows, forming a city the size of a few football fields that sits under a fragrant cloud of wood smoke. Last night, people walked around ogling each other’s cookers and greeting old friends with backslaps and beers. There was a party at the Canadian team’s tent, draped in maple leaf banners; a cook from an Austrian team wearing a cowboy hat passed around a bottle of schnapps. But this morning, everyone has their eyes on the prize: $5,000 in cash. And the judging is about to begin.

At the camp of Cool Smoke, a team from Richmond, Virginia, no one says a word. No one except chief cook George “Tuffy” Stone, a wiry 47-year-old who is standing in the kitchen of his Forest River motor home, singing the Oscar Mayer bologna jingle at the top of his lungs. He focuses his nervous energy on a tray of smoked chicken thighs, carefully dipping each one into a bowl of homemade sauce sweetened with Virginia honey, then darts outside to his smoker to finish cooking the meat.

“If you don’t have bite-through skin, you don’t have a chance of getting into the Top 10,” Stone says. It’s for that reason he spent one and a half hours last night removing the thigh skin and meticulously scraping away flabby fat from its underside before stretching the skin back over the meat. Now he opens the grill to reveal the most beautiful thighs you’ve ever seen: perfectly rectangular and burnished to a glossy mahogany. You bite in and the skin shatters, giving way to succulent, smoke-tinged meat.

Hang around barbecue competitions—any of the hundreds that happen nationwide throughout the year—and you’ll pick up plenty of tips. There’s no better place to learn what you should be injecting your pork shoulders with (peach or apple juice), marinating your chicken with (Newman’s Own Italian salad dressing is a favorite on the circuit), or how you should be cooking your ribs (with the 3-2-1 method, see recipe). You’ll also be well-fed: Walk around, and teams hand out brisket slices and ribs. But competition barbecue is about more than perfecting your cooking techniques or scoring free food—it’s about stepping into a growing subculture, one that revolves around a passion for slow-smoked meat.

“Barbecue is not a solitary pursuit—it’s a lifestyle,” says Carolyn Wells, executive director of the Kansas City Barbecue Society, competition barbecue’s main governing body. A tall woman with a commanding voice, she’s at the judges’ tent helping to pass out score sheets to the 75 people who will be rating today’s chicken, pork ribs, pork shoulder, and brisket (see “Criteria of ‘Cue,”). “I haven’t seen you since Memphis!” a big man in a sauce-splattered apron says, giving her a bear hug.

Carolyn and her late husband, Gary, founded KCBS in 1986 with 35 friends as a way of creating more contests, and thus more excuses to get together and grill. The organization, which operates as a nonprofit dedicated to “celebrating, preserving, and promoting barbecue as a sport, an art form, and a culinary technique,” now has 14,000 members, has trained close to 20,000 judges, and oversees 400 competitions a year. Repeat winners decorate their camps with banners from corporate sponsors like Duraflame and Weber, and circuit legends—like Paul Kirk, winner of seven world championships, and Myron Mixon, who has taken home 1,700 trophies—have become bona fide celebrities, with cookbooks and television shows. And the purses are growing: Last year, KCBS-sanctioned contests doled out $2.5 million, and Sam’s Club, an official sponsor, recently announced an event with a game-changing total of $400,000 in prizes. “It’s gone big-time,” Wells says. “I don’t want to say NASCAR status yet, but we’re on this trajectory of critical mass and big money.”

a team from Poland

One reason competition barbecue has grown so big so fast is that virtually anyone with a grill and gumption can play. Most competitors at the Jack are barbecue-obsessed home cooks; during the week they’re engineers, farmers, cops. Some are professional chefs. Stone falls into the latter camp; he runs a catering company in Richmond and got into competition barbecue in 2004 when he started to feel disconnected from cooking. He bought himself a smoker and began experimenting with big cuts. At his first contest, he took home second place in pork; before long he was traveling to competitions and e-mailing about barbecue with people he met on the road. Now he has 100,000 barbecue miles on that motor home; a lipstick red custom pit he refers to as “the Grillvette”; and some serious wins under his belt. Last year, he opened a barbecue restaurant called Q in the suburbs of Richmond.

Like everyone at the Jack, Stone got here by winning a regional championship; this is the fourth time he’s qualified in six years. Folks who compete as often as Stone (who travels to between 15 and 20 contests annually) know how to cater to the judges, and that’s what he’s doing as he arranges his best-looking thighs in a Styrofoam entry box carpeted with chopped parsley. “Four minutes to turn-in,” his father says calmly. Stone wraps the box in a quilted cozy his friend made for this purpose and sends his dad running to the judges’ tent.

Then it’s on to ribs, to complete the process of smoking, rubbing, spritzing with juice, and saucing that started the night before and has ended with tender, gorgeous racks. For every three ribs, Stone sacrifices the middle one, slicing it next to the bone so the surrounding two are meatier. “This is one-bite food,” he says. “I have just one chance to get the judges to love it.”

pork shoulder from Brett Schreyer of the Montana-based UnNSmokin team

By the time the Cool Smoke team has turned in all its boxes, everyone’s red-faced and exhausted. They collapse into folding chairs and feast on the leftovers. At the end of the day, the team will take home third place for chicken and seventh place for brisket—nothing to sneeze at considering the caliber of this competition. “I can’t complain,” Stone says as he packs up his motor home, putting away all his grill tools and ingredients in plastic boxes. “I’m already thinking about the next contest.”