How to Buy Wine: A Practical Lesson With Carl York 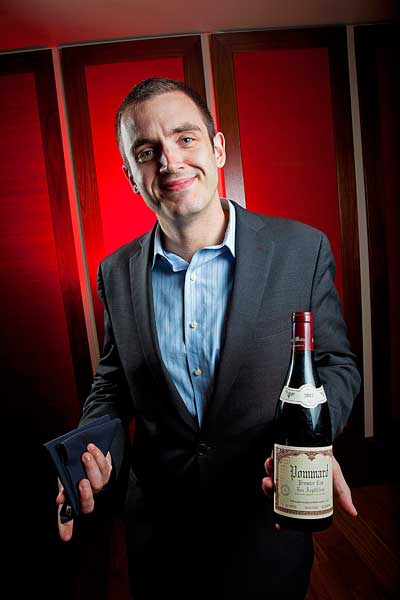 When it comes to wines, I have my favorite styles that I’ve developed a taste for over the years: chardonnay if I want white, cabernet sauvignon if I want red, and only champagne with wedding cake, my favorite food combination of all time. I generally avoid reds unless I’m eating the occasional steak, but can drink white alone or with any other food put in front of me. It’s these particulars about my taste that I was so happy to have confirmed when I met up with Carl York, the beverage director at New York restaurant SHO Shaun Hergatt, at Vestry Wines in the city’s Tribeca neighborhood. There, I asked his advice on buying and drinking wine and cutting through all the jargon to find that perfect bottle.

“The best rule is to buy the wine you know you’ll drink,” York says. “Don’t buy wine based on labels or what some critic you never follow recommends in a magazine because you don’t know their tastes, only yours. If they recommend a huge, bold wine, I won’t try it because that’s not the flavor profile I like.”

York recommends that drinkers buy wines from smaller, family-run vineyards because they care more about developing a great tasting wine rather than making money. And as a result, these small-producer wines will generally be cheaper. “Major-market wine, by definition, can’t make good wine cheaply like smaller vineyards can, i.e. California cabernet sauvignon and chardonnay, Oregon Pinots, or French Burgundies and Bordeaux.” Another argument for buying less expensive wine: it’s designed to be consumed now. “Most of the expensive wines are made to age and get better over several years,” he says. “So you don’t want to buy them now to drink. Buy cheaper wines that are made to be drunk now.”

Don’t get caught up in the hype around certain wine concepts, either—like supposedly “bad” wine years. York says it’s all nonsense: “When wine producers make wine one year that’s not on par with their normal selection, then it’s not necessarily ‘bad,’ just ‘different.’ That may be the wine that you like because it’s different, but you should generally stick to a wine producer that can make great wine no matter the conditions.”

For his own current favorites, York lauds a “light and sour” Loire Valley red and a sparkling Txakoli from Spain’s Basque region. “And champagne too is such a growing market, so I’d recommend any small producer – if you haven’t heard of [the producer], pick it up because it’s probably very interesting and much cheaper than the major producers.”

Even if you stick to the less pricey end of the wine spectrum, it can get expensive simply trying all the wines available to find the one right for you. York advises finding a wine store that cares about their inventory and can guide you in the right direction based on your tastes. “If you go into a wine store that also sells liquor, get out! Their top priority is not wine. Find a smaller store that sells wines you’ve never heard of—those are usually the best ones.”

Once you’ve found the store you love, build a relationship with it. “Don’t go blindly hunting. Associate with stores that have tastes like yours and trust them to point you in the right direction. They may give you some you don’t like sometimes, but that’s all part of the experience and trying to figure out your tastes and push you into areas you never knew you might like. If the wine is a good expression of where it’s from—it tastes of the region it’s grown in—then you know it’s a winner, and that’s what you should be drinking.”