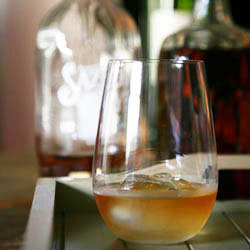 Rye wasn’t poured at the first Thanksgiving, but this amber spirit is the country’s original whiskey, dating to pre-Revolutionary War times. It’s what George Washington distilled at Mount Vernon and what he taxed in 1791, setting off the protests in western Pennsylvania that became known as the Whiskey Rebellion. Rye fell out of favor after Prohibition, however, owing in part to the increasing popularity of bourbon, its sweeter cousin. But recently rye has been regaining a foothold, as cocktail enthusiasts encounter its nuanced charms (and those of traditional recipes for old-fashioneds and manhattans, which call for rye).

Autumn is the perfect time of year to snuggle up to rye’s warm flavors. “Bourbon tends to be sweeter, more caramel-vanilla, but rye’s a little spicier, a little fruitier,” says LeNell Smothers, proprietor of LeNell’s, a whiskey-centric liquor shop in Brooklyn, New York. Like bourbon, she explains, the spirit is aged for at least two years in new, fire-charred white-oak barrels. Whereas federal law requires that a bourbon’s grain mash contain at least 51 percent corn, rye is made from at least 51 percent rye and usually a lot more, so it has a bolder, more distinctive flavor.

Smothers is such a rye lover that she’s been bottling her own brand, called Red Hook Rye (named for the neighborhood where her shop is located), from a stash of barrels she acquired in Bardstown, Kentucky, from Kentucky Bourbon Distillers, the same company that selects and bottles whiskey for the highly respected boutique bourbon brands Johnny Drum and Rowan’s Creek, among others. At the distillery, she found rye that had been aged for a whopping 24 years. “I went down to their warehouse, and I tasted a bunch of barrels until I found what I wanted,” Smothers says in her soft Alabama drawl. “At that age, it’s hard to find a whiskey that’s not completely woody. This one had a real nice creaminess and texture and still maintained some fruit and spice.”

While most rye producers dilute their whiskeys with water before bottling, Smothers bottles hers straight from the barrel, at a very high proof (133), which translates into a fiery character that all but demands a splash of chilled water or ice. “I wanted whiskey in its pure state,” she says. “You get more flavor that way.” As with most long-aged ryes (which are in short supply), time in the barrel makes for pricey bottles—hers cost $110 each. While Smothers often sings the praises of less expensive brands, like Rittenhouse and Wild Turkey (see Tasting Notes: Rye Whiskeys), her customers don’t seem to mind paying extra for her magnificently complex version.