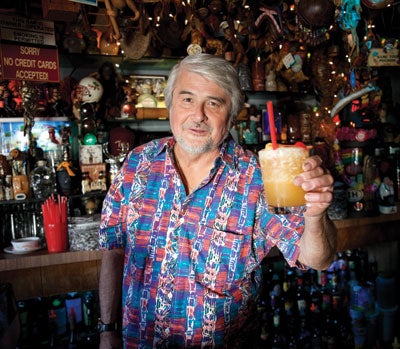 They don’t serve beer. They don’t serve wine. For weeks at a time, they don’t serve anything at all—whenever they feel like getting sand between their toes, they just close shop. The owners of the Tiki-Ti in the LA neighborhood of Los Feliz are textbook examples of how not to succeed in the bar business, yet for the past 49 years the Buhen family has been slinging Singapore slings and missionary’s downfalls for a fanatical following.

My first visit was in 1979. I’d previously dismissed tropical cocktails as slushy “umbrella drinks,” but the Tiki-Ti’s Navy Grog folded the umbrella forever. It was a complex creation, run through with striations of lime juice, simple syrup, grapefruit juice, allspice, and smoky Demerara rum. Like many of the Ti’s 92 cocktails, the Navy Grog has a unique pedigree: it was invented in 1934 at the first tiki bar, Don the Beachcomber’s, where Ray Buhen, a native of the Philippines who arrived in LA in 1930 at the age of 18, was one of the original bartenders. The Beachcomber’s “Rum Rhapsodies” attracted a who’s who of post-Prohibition Hollywood—Howard Hughes and Joan Crawford were regulars—and kick-started the midcentury Polynesian Pop craze.

Ray Buhen spent the remainder of the golden age of tiki honing his craft behind some 60 different bars—including one custom-built for Clark Gable and the rest of the cast and crew of MGM’s 1935 production of Mutiny on the Bounty—all the while amassing an unparalleled archive of drink recipes. In 1961 his wife, Geraldine, and son, Michael, helped him to transform the east side storefront that had once housed his father-in-law’s musical instrument repair shop into the Tiki-Ti, a hideaway chock-full of tropical artifacts.

The Tiki-Ti’s signature cocktail, a passion fruit-and-lime-flavored rum cocktail called Ray’s Mistake, was born in 1968, when Buhen put the wrong syrups into a customer’s Anting Anting (a drink whose name means witches’ brew in Tagalog, a language of the Philippines), and the customer told Buhen not to bother fixing it. Other Buhen family inventions go by such names as Hawaiian Twist, Pink Fire, and Puka Punch, a kitchen-sink brew containing three rums, three juices, and two syrups, among other ingredients (see Puka Punch).

Ray died in 1999, but Michael and his own sons, Mike and Mark, keep his spirit alive. Every Wednesday evening at nine, Mike Buhen Sr. rings a bell and leads the room in a toast to his dad, whom he calls the Master Ninja. Though not as many stars stop by as in the 1960s, when Marlon Brando popped in frequently, the Tiki-Ti continues to serve the east-side bohemians, downtown office workers, USC students, and suburbanites who pack the tiny, 24-seat room tighter than Michael’s lips when you ask him the exact ingredients in a Ray’s Mistake. After 30 years I still can’t deconstruct that recipe.