Alone with a Bowl of Gnocchi

When you are young and far from home, a big bowl of pasta will do 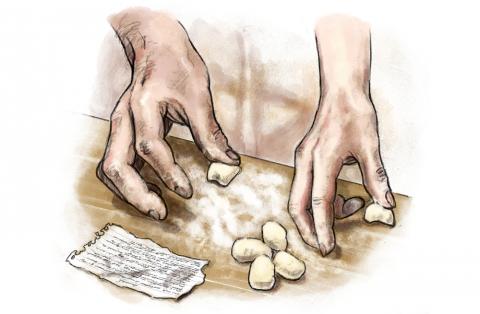 I was eighteen when I moved to New York, and I missed my family every time I sat down to eat: in dining halls with people I wasn’t sure I liked yet, in my apartment with the roommates I slept inches away from but barely knew.

At home, eating was always communal. Even if we were eating pop tarts in the morning, we were eating them together, and at night we always gathered as a family for dinner. Here, in this new city, I wanted badly to feel at ease eating by myself; in my mind, this would mean that I was really living on my own as an adult.

Around dinnertime on Valentine’s Day that first year, my roommates went out on a double date with two ponytailed Israeli boys from a creperie down the street, and I started to feel that mealtime anxiety roiling around in my guts. I decided that if I was ever going to get comfortable eating alone, Valentine’s Day dinner was a good time to test myself, and I set out looking for somewhere to dine. I wandered up and down a street littered with bong shops and falafel joints and finally ducked into an Italian restaurant I’d passed by a thousand times. The waiters were as old as my grandfather and I could tell they felt nervous that I had forgotten it was Valentine’s Day—that I would be upset when I realized that everyone in the restaurant was paired off and gazing at each other through the candlelight.

I ordered a glass of Chianti and it tasted like a dusty basement but I drank it, grateful that I didn’t have to use my fake ID, thinking that maybe this was what good wine tasted like (spoiler alert: it’s not). In a strange turn of events that felt like a fever dream, a Mariachi band came barreling into the restaurant wearing sequined sombreros, and started performing tableside for each couple. I think they must have been hired by the owner to provide some Valentine’s Day ambience, and when I looked around I appeared to be the only person who was confused by it, so I didn’t ask any questions. When they got to my table they launched into a melancholy song that kept asking “qué tan caliente está el sol?”—“how hot is the sun?”—over and over again, and I smiled until my mouth twitched in order to be polite. When they were done I clapped and they said, “you need to pay us now.”

I ordered a giant bowl of gnocchi with cream sauce. Looking back on that night, my order is one of the things that tugs at my heart the most—when you’re young you eat without fear or inhibition, you eat exactly what sounds good to you at that moment. I never paused and thought, “maybe I shouldn’t,” or, “maybe I should order a salad to balance things out.” I wanted the gnocchi, I wanted it with cream sauce, I ordered a side of bread to mop that cream sauce up, and never once did I second-guess myself.

The chef, also my grandfather’s age and with a belly so round it looked hard to the touch, was walking by every table, wishing his regulars a happy Valentine’s Day and asking if everything was good. I told him the gnocchi was the best I’d ever had, because really, truly, it was. He told me to come back to the kitchen so he could show me how to make them for my husband someday (I also apparently hadn’t yet learned not to go into enclosed spaces with strange older men, but it all worked out fine).

It was the first professional kitchen I ever stepped into and I was awestruck by the size and heft and importance of it all. He showed me how to scoop the potatoes and mix in the flour, how to roll them under your thumb to make them look like doughy pillow mints. He let me try gnocchi with two kinds of tomato sauce, gnocchi with bolognese, with pesto, with clam sauce, and while he talked I scribbled down each step in a spontaneous kitchen shorthand that I didn’t recognize by the time I got home that night. It was the least far away I had felt from my family—from our noisy and warm and messy dinners—in months.

I knew that this chef was doing something kind for me that night, letting me into his kitchen. Today, having worked in a number of professional kitchens, I know just how kind it really was. Valentine’s Day is one of the busiest dinner services of the year; allowing a stranger to take up space in your kitchen on that night is kindness bordering on madness.

I left with a huge slab of tiramisu in a Styrofoam box and a scrap of notebook paper with a recipe for how to make 500 gnocchi. I still have it, stashed in a notebook—it makes absolutely no sense, in the way that recipes dictated by someone who has made them a thousand times often make no sense.

In the eleven years since I’ve tried to recreate that dinner many times, but the results have never held the same magic as that night, when I was young and homesick and full of cream sauce and New York felt, for the first time, like maybe it was my home.