Eggs and Rice, No Champagne 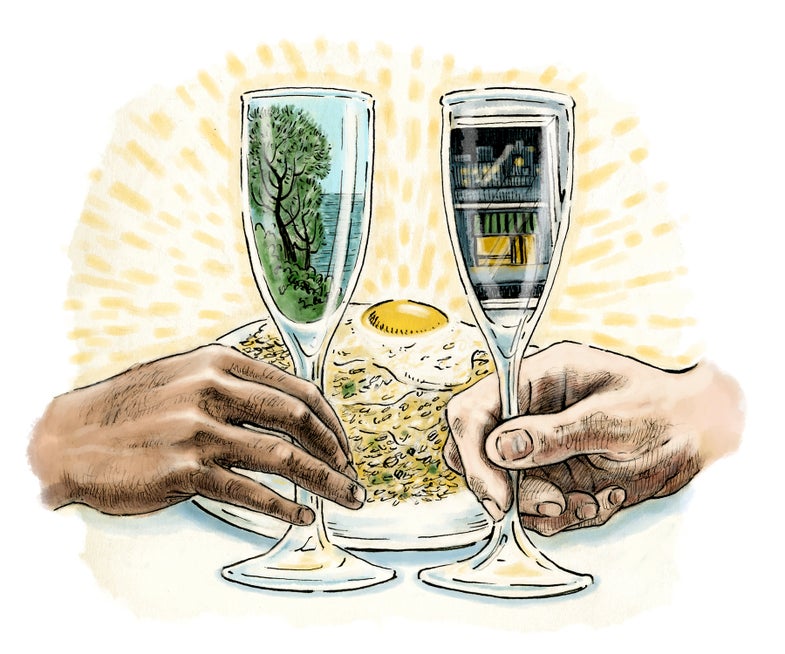 I fell in love with Perry in November 1992, three months before Valentine’s Day. I remember because it was Election Night and we sat on somebody’s front steps in San Francisco and heard people whoop about Bill Clinton and felt our legs touch.

We spent that fall in Perry’s single bed, pushed up to the wall in his flat looking onto a streetcar stop and the restaurant where I used to cook. Only one of us could sleep on his back at a time—if you had the side shift you jammed yourself against the wall while your mattress arm went tingly, then dead. I remember the cold plaster on my spine and the sound of the N Judah shuddering on rails in the dark, feeling Perry’s breathing and trying to care about sleep.

For Christmas that year I gave us a weekend up north in Mendocino. On a chill, bright Friday in January we packed up my ‘71 VW Squareback—faded yellow, scarred and rusting—and drove north to a bed and breakfast, Agate Cove (“Faggot Cove” we called it, and cracked up). In our room was a mammoth jacked-up bed, four-postered and pillow-topped. We could have both splayed out like Leonardo’s Vitruvian Man and never even touched if we’d wanted, although I don’t believe we bothered to try.

Alas, Faggot Cove wasn’t very faggoty, nice but not us. To be honest, I only knew about the place because my parents used to come here—it was as stiff and psychologically sketchy as it sounds to have a romantic weekend in your mom and dad’s love nest: ruffly sheers, tortured Victorian wash stands, and breakfast with perfectly nice middle-aged straight couples who made polite talk with us but who must, in the privacy of wallpaper-bordered-and-mahogany fireplace suites, have eye-rolled.

To escape we drove to a trailhead, hiked fierce switchbacks through the redwoods, searching for a primeval grove of pygmy trees we’d read about. It took hours, without water or so much as a granola bar in our pockets, but we found it—a high ridge with blunt, shaggy pines and a view of the Pacific, a vast sheet of dimpled blue glittering out to infinity. I was in love deep.

And I was starting to freak out. Valentine’s Day was two weeks off, looming like a test that would count for 90 percent of my grade. I was stalked by a dilemma: which holiday to plan? Restaurant blowout on a well-used credit card? Geek-charm picnic that could turn sodden and dreary? I broke down, told Perry what I was struggling with. He screwed his face up (like he still does). “You’re thinking too much. Relax.”

If being gay teaches you anything, it’s that nothing about love is prefab. No couple’s narrative plays out exactly like another’s, and no holiday should kneel to a checklist of romantic imperatives, especially ones flocked in red plush. If love doesn’t come with permission—or an invitation—to tell tradition to fuck off, well: Maybe it isn’t love.

Valentine’s night we hung out at Perry’s flat; he made eggs and rice. It’s a Filipino thing he grew up with, fried eggs mashed by fork into a pile of hot rice until golden and sticky. We ate on the living room floor watching Beverly Hills 90210, his roommates popping in and out before baroque dates. I peeked out the window of Perry’s room at my old restaurant, jammed with deuces, and crawled into bed, the chill of the wall on my back, arms in an awkward origami around the man I loved so much more, at that moment, than if I were facing him across an uni risotto.

We forgot to get Champagne.