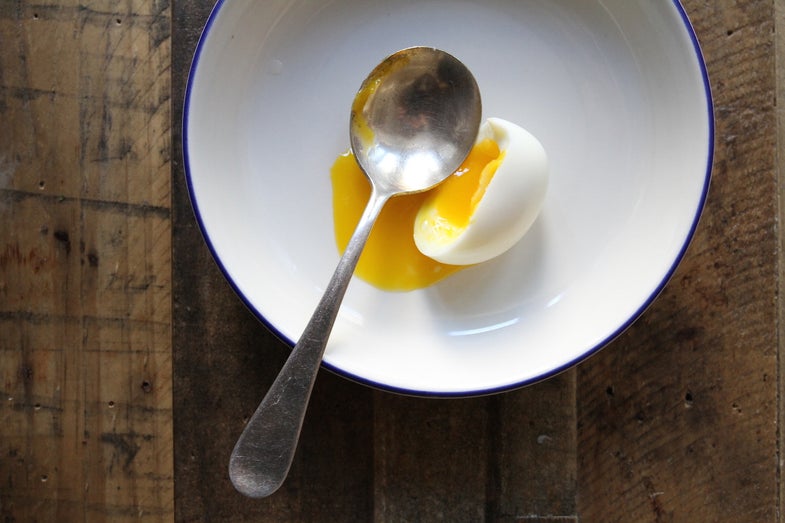 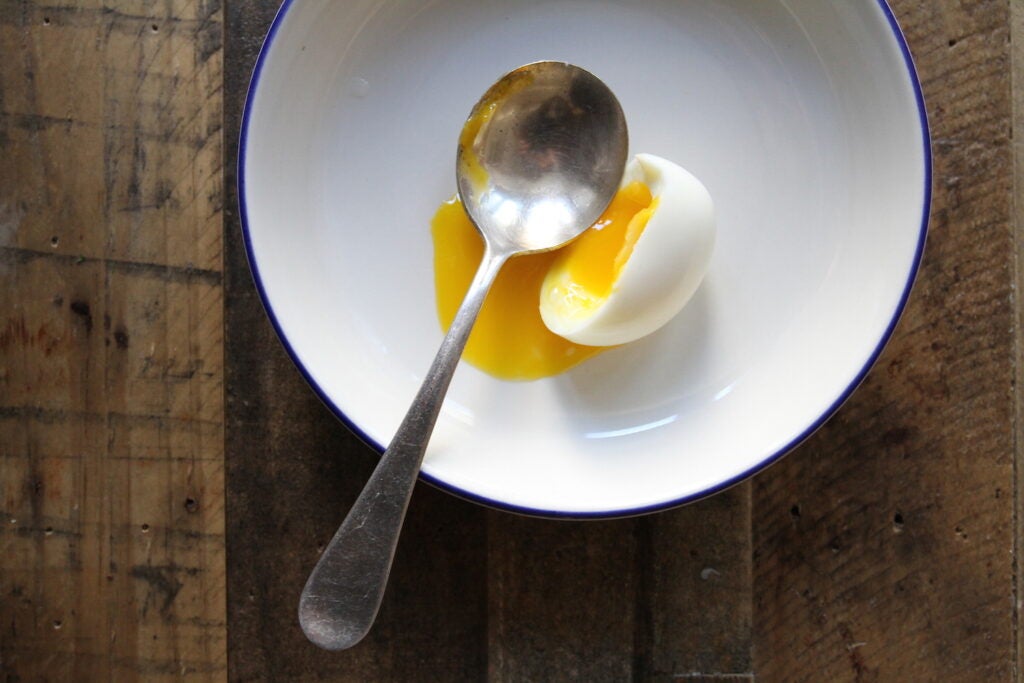 I live with a chef who works late and a two-year-old who wakes early, and this makes me, by default, the Morning Parent. It’s not the greatest gig, as my fellow Morning Parents can attest, particularly here in Seattle, where the winter mornings are long and dark. It has, however, afforded me the opportunity to pick up a valuable trick, and in case you’re ever housebound in the early hours with a toddler (or someone with the motor skills of a toddler—maybe yourself, for instance, pre-caffeination), I will share it: Boil an egg for seven minutes, peel it, put it in a bowl, hand the kid a spoon, and ask her to pierce the yolk. Voilà: your own small-scale boxing match, no Pay-Per-View needed! The egg bobs and weaves, slips and slides, darting around the bowl, elusive as Ali, until—he’s down! he’s dooowwwwn—the spoon connects at last in a thrilling rush of gold. Then, as in all boxing matches, the winner eats the loser with a pinch of salt.

There are many schools of thought on egg boiling, one of which holds that the words “egg” and “boil” should never share a sentence. I have eaten meticulous eggs à la David Chang, cooked in 145-degree water for 45 minutes, and I’ve eaten haphazard eggs à la my grandmother. I’ve come to believe that, if what you want is a set white and a soft yolk, simple is best: the seven-minute egg.

It’s less fussy than poaching, able to be peeled or served from the shell, and pretty much guaranteed to be perfect, with a white that’s neither rubbery nor [shudder] runny, and a barely-cooked yolk that still runs, but slowly, like hot fudge. All you have to do is fill a saucepan with water (enough to cover a few large eggs), bring it to a boil, ease in the eggs (I lower them on a spoon), and set a timer for exactly seven minutes. (For medium eggs, try 6:30, or just straight-up six, if you live on the edge.) If the water threatens to boil over, lower the heat, but keep it bubbling. If the egg cracks and a little white seeps out, don’t worry; it happens. (Some people prick the shell with a pin before cooking, to let air escape, but eh, I don’t bother.) When the timer goes off, drain the eggs immediately—this part is imperative—and run them under cold water until they’re cool to the touch. Victory is nigh.

The seven-minute egg was first made for me by my cousin Katie and her husband Andre, and it was first made for them by their friend and occasional houseguest Will, who is, as Katie put it, “the kind of person who feels very comfortable in other people’s kitchens.” One morning, Will rooted around in their fridge, pulled out a few eggs, warmed up some beans, and seven minutes later, presented them with breakfast. Andre had never been much of a morning eater, but the egg-and-bean bowl felt different: it was easy, for one thing, and quick, and surprisingly delicious, and it carried him through handily to lunch. He stuck with it. He uses canned beans—white, black, pinto, Ranch-style—and sometimes he adds feta or aged cheddar, sometimes salsa, usually hot sauce, and of course, always salt and pepper. Katie, who often takes hers to go, tells me that you can microwave the cooked, shelled egg for twenty seconds to rewarm it. She likes a seven-minute egg for lunch, on a pile of leftover roasted vegetables and quinoa, or on top of a salad.

In our house, we smash them on buttered toast, or, if my husband is up in time, he’ll make bowls of doctored black beans. But mostly, I serve them with just a spoon and some salt, and a toddler on the side.