How to Make Mallomars

From April through August, Mallomars can be nearly impossible to come by—luckily, you can make your own. 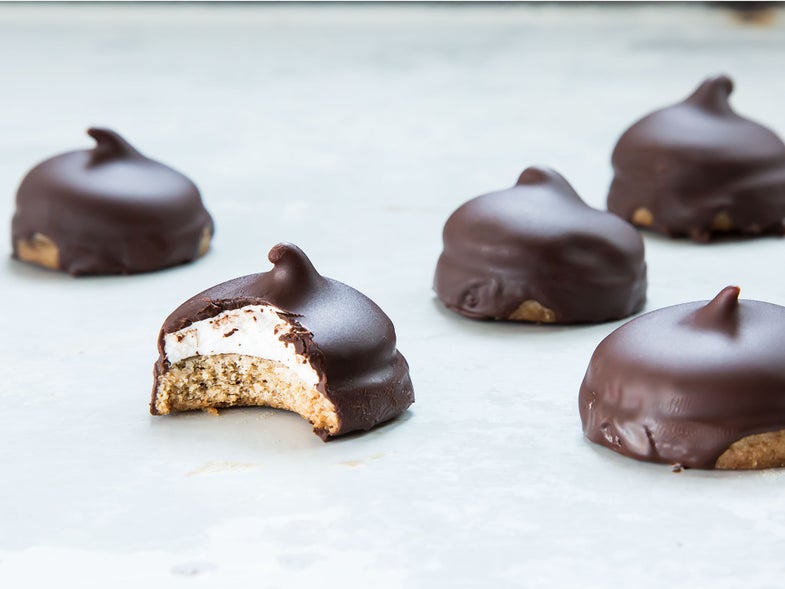 With a dense chocolate coating and a soft, cakelike cookie base, we think these homemade mallomars are even better than the original. Get the recipe for Homemade Mallomars ». Matt Taylor-Gross
SHARE

I’ve been obsessed with Mallomars my entire life. For the uninitiated, Mallomars are packaged cookies from Nabisco, two-bite marshmallow treats covered in chocolate that fall somewhere between a Moon Pie and a s’more. I don’t remember my first, but my most vivid Mallomar memory is an indulgent afternoon I spent on the couch watching The Maltese Falcon while methodically consuming an entire box. I popped one after another of those chocolate dipped pillows of marshmallow cookie into my mouth until they were gone. That is the stuff that dreams are made of.

Ninety-five percent of Mallomars are sold in the Northeast, where I’ve spent most of my life. The Mallomars of my youth came in a “twin-pak” and were called cakes. The yellow package depicted dark chocolate cascading over the marshmallow cookie and proclaimed they were for “people who love the taste of chocolate.” Growing up, just a glimpse of that yellow box created a riot in the grocery aisle.

Nabisco sold the first Mallomars to a grocer in Hoboken, NJ in the fall of 1913. They were seasonal, offered only in the cooler months to protect the integrity of that much touted chocolate shell. The company continues that tradition today, selling them only from September to March. If it’s a marketing ploy, it works. Fans stockpile them, filling their freezers for the draught ahead or selling them at a premium on Amazon to those in need of a fix.

Even during Mallomar season, they can be hard to come by. If a market carried Nabisco’s Famous Chocolate Wafers, there is a good chance they would also have my beloved Mallomars. In NYC, where most of the product is sold, Fairway and other chain markets were always good for Mallomars but adhered to the strict schedule of availability. By April they’d be gone, having been marked down and snatched up by devotees. To find a forgotten off-season stash at a corner bodega (who play by their own rules) was a true score.

In Richmond, Virginia, where I now live, Mallomars simply don’t exist. So I set about making my own. The results, with a dense, candy bar–like chocolate coating and a soft cookie base, were even better than the original. They were akin to a version you might find at a chic bakery. Friends devoured them, impressed. Though not quite the same, they made a fine stand-in, and biting into one gave me that trademark blend of homesickness and comfort I’ve come to associate with Mallomars. So while I’ll always be on the lookout for that bright yellow box, now I have a recipe in my back pocket for when I need a taste of my Northern roots.

See the recipe for Homemade Mallomars »