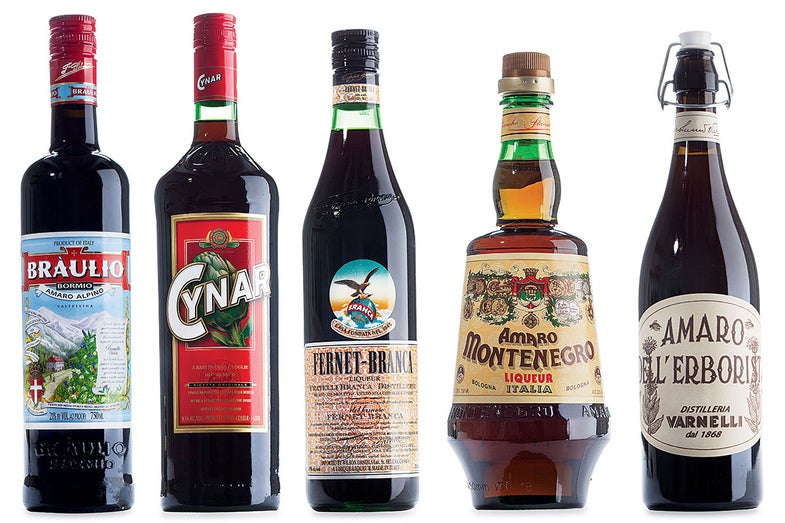 I look forward to the end of a meal as the beginning of the amaro course. Concocted from a witch’s brew of ingredients—tree bark, mushrooms, angelica, myrrh—these Italian liqueurs, whose name means “bitters,” lend layers of powerful flavor to drinks, from sweet and aromatic to astringent and menthol-like. Viscous, bracing, and often challenging, amari started out as cure-all medicines concocted centuries ago by monks and herbalists. To me, though, they’re still mysterious and magnificent. In Italy, they are served mixed with soda or tonic water as palate-awakening aperitifs, or sipped straight as soothing digestifs at the end of a long, multi-course meal. They’re also fantastic in cocktails, where they add body and intriguing bitterness.

Among my favorites, Amaro Montenegro, named in 1896 for the future Queen of Italy, has a surprisingly rosy nose and flavors of bright orange and cedar that make it a natural for mixing with citrus juice in cocktails. Developed in 1875 by a pharmacist using herbs from Lombardy’s Valtellina valley—gentian, juniper, peppermint, yarrow—bittersweet, nutty Braulio Amaro Alpino offers a leafy-fresh lingering finish that gives savory depth to Sazeracs and other whiskey drinks. Cynar has a vegetal bitterness derived primarily from artichokes (cynara is the vegetable’s Latin name); it pairs nicely with mint and grapefruit soda in a julep variation that emphasizes its soft, oily texture. A bartender favorite, Fernet-Branca is less sweet than most digestifs, with notes of aloe and saffron and a hearty alcohol kick that can stand up to other strong flavors like espresso and dark chocolate. Silty, unfiltered Varnelli Amaro Dell’Erborista, from the La Marche region, is both woody from quinine-containing bark and creamy from mountain honey. Mixed with prosecco, it adds fascinating complexity to a spritz.

Camper English is a contributing drinks editor for SAVEUR.