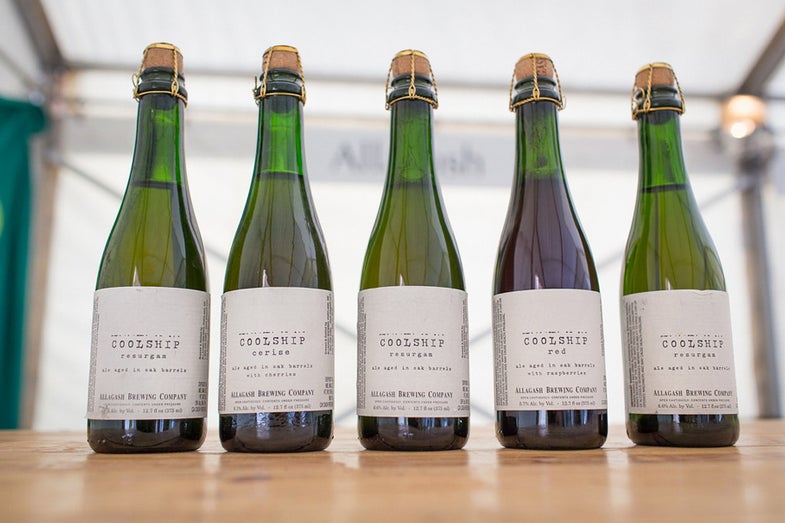 On any given chilly Maine evening, Jason Perkins, brewmaster at Allagash Brewing Company in Portland, Maine, can be found attaching the nozzle of a thick hose to an opening in the side of a shallow metal tank resembling a very wide cattle feed trough. He’ll flip open a valve and let the tank fill slowly with boiling-hot unfermented beer, a combination of water and malt extract called wort. The tiny wood-paneled shed built to house the stainless steel reservoir is quickly engulfed in steam wafting up from the cooling liquid and escaping through several agape stained-glass windows along the walls. When the reservoir is nearly full, Jason removes the hose, closes the door, and walks away. He lets the wort sit untouched overnight until it cools to around 74° aided by nothing more than time.

This stainless steel tank—called a coolship, or koelschips in Dutch—is a traditional Belgian brewing implement used for centuries by historic beer producers like Cantillon in Brussels and Drie Fonteinen in the Senne Valley to make lambic beers: Brews fermented “spontaneously” with yeast and bacteria from the ambient environment, made with a significant percentage of raw wheat in the malt and a whole lot of aged hops. Traditional variations on the style include gueuze, a blend of aged and young lambic; kriek, which is aged with cherries; and framboise, which is lambic aged with raspberries. Until 2007, when Allagash installed and began making their own American lambic-style beers, coolships were all but absent in the United States.

Today, the Portland, Maine brewery makes three different lambic-style beers, known collectively as the Coolship Series, which they call Red, Cerise, and Resurgam. If it’s any indication of how good they are, the Belgian beer community has taken notice. “I’ve visted Allagash a couple of times,” says Yves Panneels, owner of Grote Dorst, a famous lambic bar in the village of Eizeringen about a dozen miles west of central Brussels. “They understand exactly what spontaneous fermentation is.”

Last month, Allagash poured all three of their lambics as the only American brewery invited to participate in a festival celebrating the style, “Night of Great Thirst,” hosted biannually by Panneels. The event started as an attempt to preserve the spontaneous fermentation method. “In 2004, the federal government wanted to close down some of our lambic breweries,” says Panneels, “so a group of consumers took an initiative to organize a festival to make a stand against the agency’s actions.”

The actions stemmed from what the Food Safety Agency perceived as unsanitary brewing conditions—while most beer makers strive to keep their breweries as sterile as an operating room, traditional lambic producers rely on ambient bacteria and yeasts to achieve complex nuances and flavors. During the cooling process, the unfermented lambic beer is inoculated with naturally occurring microflora fluttering through the open air. These microorganisms are the impetus of the process known as spontaneous fermentation, a misnomer for the method of using ambient yeasts to ferment beer. (It’s a less-than-accurate term because the process is not at all “spontaneous.”)

Panneels says that, much to his surprise, the government actually paid attention and backed off, and that since then, “the gueuze and lambic world is flourishing again.” 2014 marked the sixth meeting of the Great Thirst festival and it was the third time that Allagash—not just the only American, but the only non-Belgian brewery to pour beer at the festival—had participated.

Rob Tod, founder of Allagash, says that he is honored to have been invited to participate. But he explains that while his brewery’s methodology may be the same as the Belgian lambic producers, he’s hesitant to use the same terminology to describe his beer. “There are no governing rules when it comes to labeling a lambic,” he told me, “but out of deference to the Belgians, we decided not to call these beers by their Belgian names and to instead refer to them as spontaneous or coolship beers.”

Of Allagash’s three spontaneous beers my favorite might be Red: Similar to a Belgian framboise, it’s aged with fresh raspberries that lend sweet notes of ripe fruit and a prickly tartness, plus an intense magenta color that is simply gorgeous in the glass. Similarly, Cerise is made with whole fresh cherries and resembles a Belgian kriek with a tart cherry juiciness and a lip-puckering finish. And Resurgam is a blend of three-, two-, and one-year old beer that mimics a Belgian gueuze. It’s intense and bracing with sharp lemon and green apple flavors.

The addition of raw wheat in the mash makes each of the Coolship beers appear hazy and rustic, but they’re also quite refined. The process of making them is a laborious, years-long effort. After the hot wort chills overnight in the coolship, it’s pumped into French oak wine barrels, where it rests for two years. It’s then matured on fruit or kept in the barrel for another two to three months before being bottled and cellared for an additional three to four months. From start to finish, the entire process takes nearly three years.

Allagash’s Coolship series makes up less than one-fifth of one-percent of its 70,000-barrel per year output. But Tod says that they’re looking to ramp up production soon. Which for the brewers means additional steamy nights spent in the coolship shed. And for us, more access to American spontaneously fermented beer.

Red, Cerise, and Resurgam are available for sampling at special festivals like Night of the Great Thirst and can be purchased only at the brewery, 50 Industrial Way, Portland, ME, in 375ml bottles for $15. There is a two bottle limit per customer. Call ahead, 207.878.5385, to check availability.