The Best SAVEUR Stories of 2017 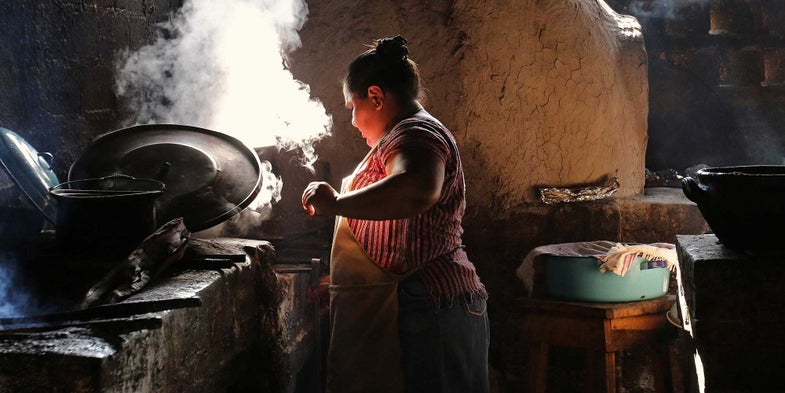 Most of the food at Na Vicenta is cooked in a wood-burning clay oven that stands guard over the restaurant's entrance and was the only thing damaged in the September 7 earthquake that devatated much of the town. SAVEUR
SHARE

For the last installment of our 2017 in Review series, we take a look at some of the best stories published right here on this site.

This year, we sent our editors and contributors to all corners of the globe, from white-clothed dining rooms and hole-in-the-wall charmers of our New York City home base to the tea-soaked mountains of Yunnan, China and the earthquake-ravaged towns of Oaxaca, Mexico. True to our #eattheworld philosophy, we aimed to share stories of food as a conduit of tradition and a bridge between cultures. We told the stories of the people who make food—in privileged spaces or otherwise—and what it means to them. We captured places and moments worth preserving for posterity. We had some booze along the way.

Now, we’re not just patting ourselves on the back. We’re constantly reading and learning from our peers, reflecting on what we can do better, and listening to what our readers have to say. But after a year like 2017, it’s worth stopping to raise a glass to the small victories. 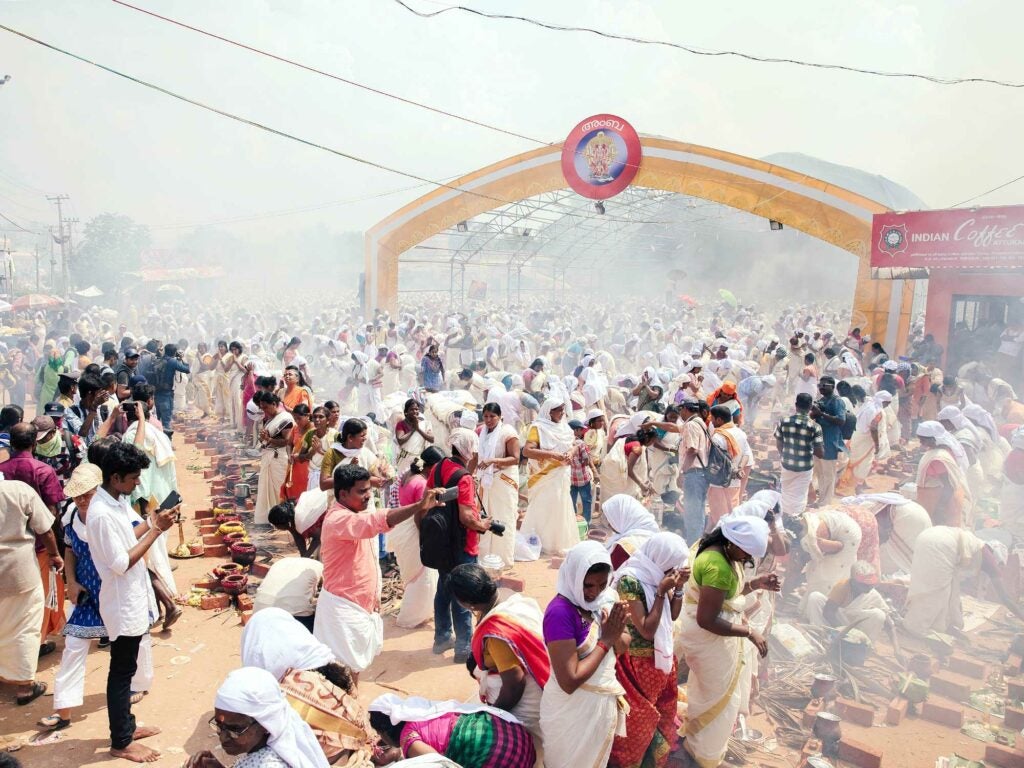 The Sacred Journey of Four Million Indian Women to Cook for Their Goddess , Leslie Pariseau

Once a year, millions of women leave their homes around Kerala to give a sweet offering of rice for their goddess, Attukal Amma

Staffers Leslie Pariseau and Michelle Heimerman traveled to Kerala, India to observe the annual festival where millions of women travel from all over India to make an offering to a goddess. The sense of community is so apparent in the story, and the two of them worked together to really bring the festival to life. — Alex Testere, associate editor 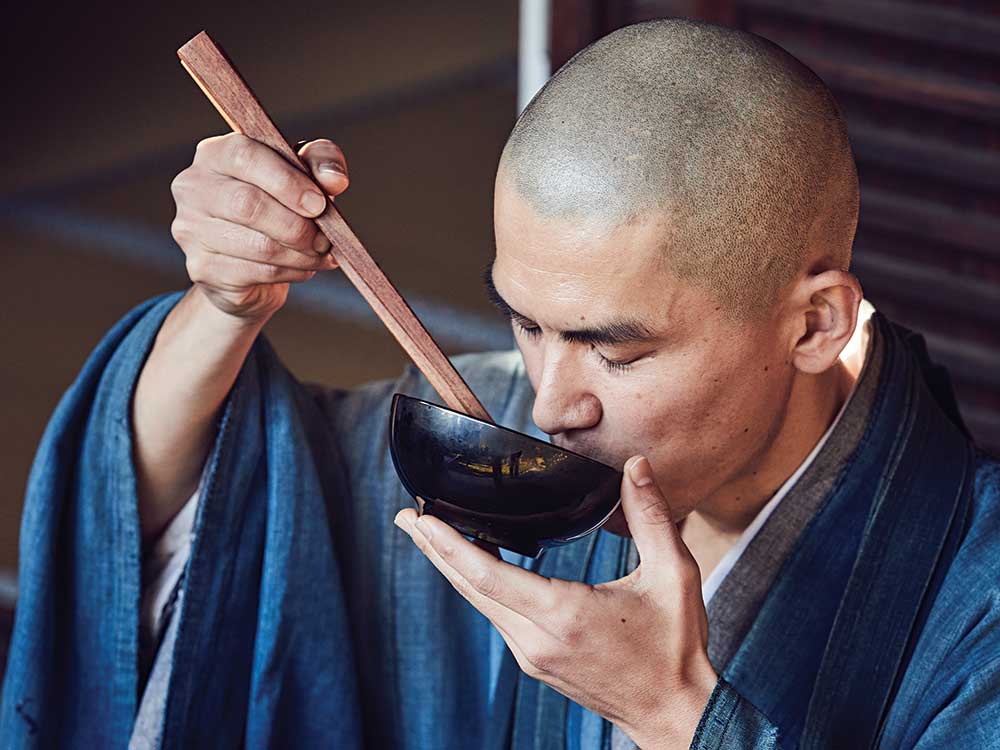 Jobun Haruta sips from a bowl of miso soup during a midday monastery meal; the oversize chopsticks are an important part of the ritual.

Kyoto’s Buddhist cuisine, called shojin ryori, is Japan’s oldest codified cuisines but is seldom encountered outside temples, religious festivals, and funerals. In this beautiful feature shot by William Hereford, writer Alex Halberstadt dives into the practice of cooking as a spiritual art—one of simplicity that stands in stark contrast to what he calls the “hedonistic, novelty-added world of food journalism” and juxtaposes even the “often exquisite trappings” that surround it—and introduces us to the monks and nuns making it all happen. — Dan Q. Dao, deputy digital editor 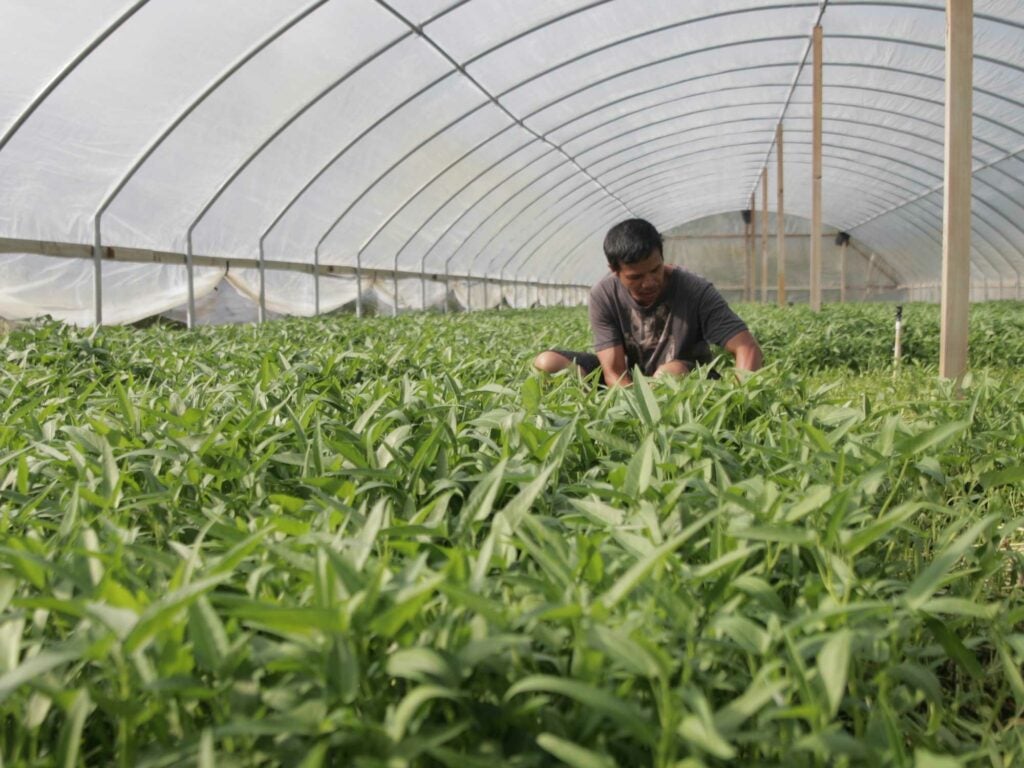 Vouth Loch, a water spinach farmer, tends to his greenhouse.

This well-reported piece shows how strongly Hurricane Harvey affected the Cambodian community in Houston, and the difficulty this community had in getting back on its feet. — Katherine Whittaker, associate digital editor 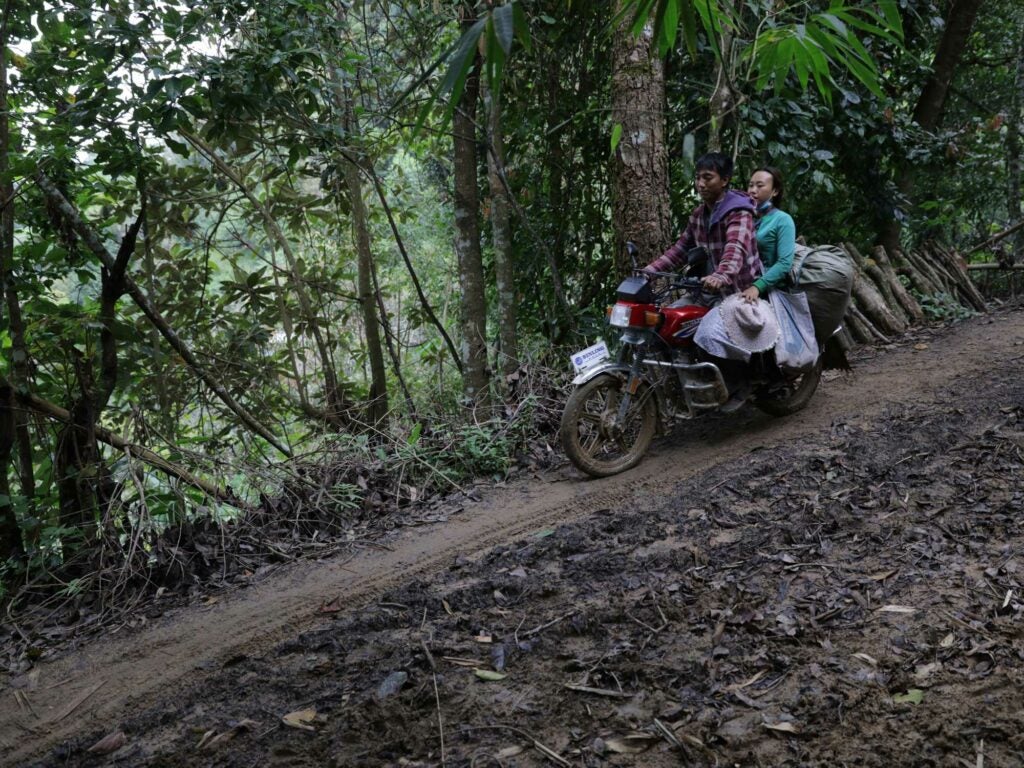 The Pu-Erh Brokers of Yunnan Province

Max’s story begins with a perilous motorcycle ride straight up a mountain in Yunnan, and by the end of it, you’ve learned something extraordinary about a highly valued and respected craft that you never even knew existed. — Alex Testere, associate editor 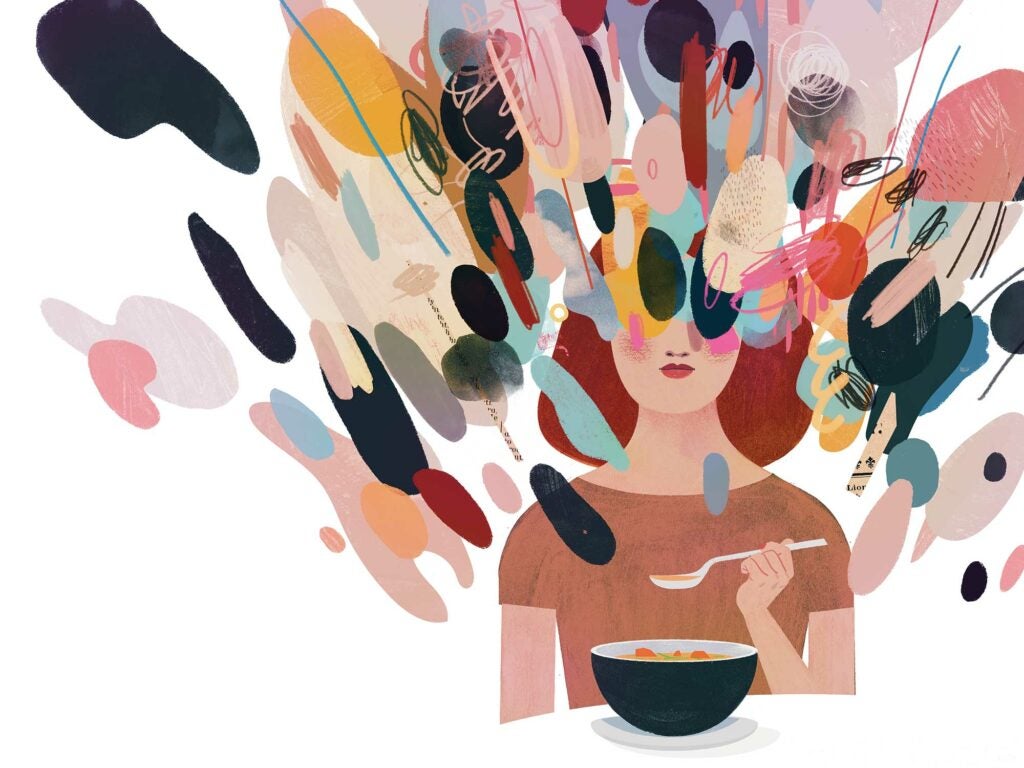 The Laws of Return , Taffy Brodesser-Akner

It’s a story about Taffy Brodesser-Akner’s obsession with a specific bowl of soup from her days as a student at a university in Ramat Gan, Israel. But, of course, it’s about much more than that. It’s about memory and nostalgia. It’s about how profoundly the moment can affect how much you love a dish. And it’s about simplicity and age and rose-colored glasses and many other things. — Michelle Heimerman, photo editor 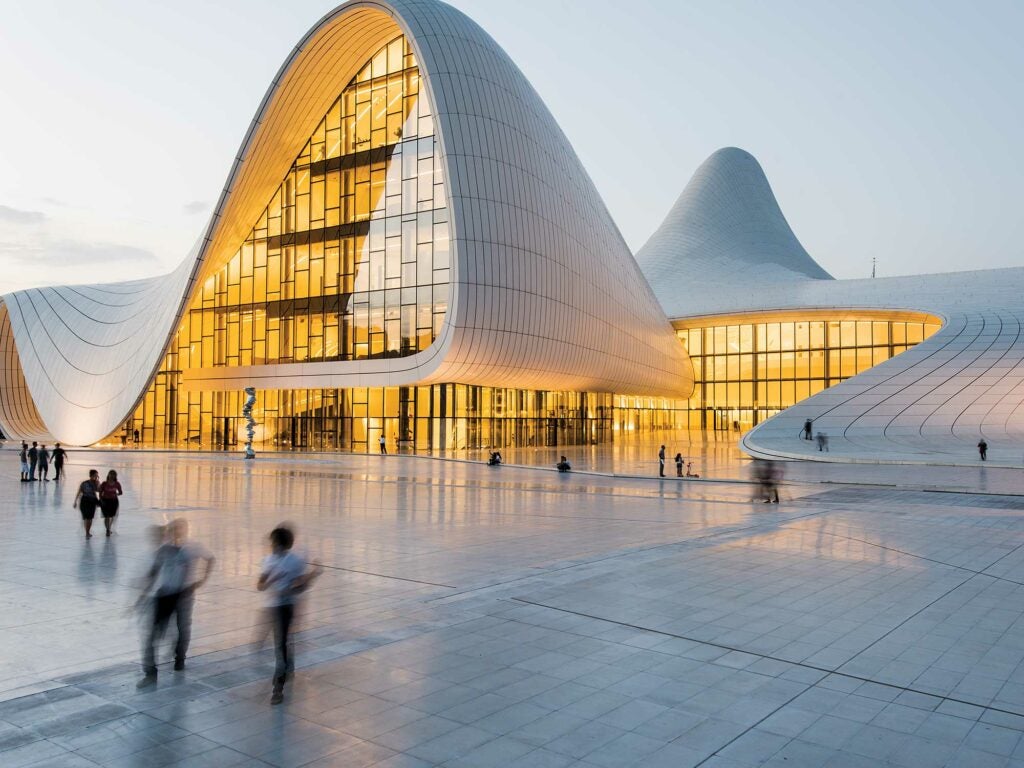 The wild, futuristic architecture of Baku, Azerbaijan—seen here at Zaha Hadid’s Heydar Aliyev Cultural Center—is just one reason why this city is ripe for exploration.

Anya von Bremzen on the people and food of Baku has everything: the excesses of Iron Curtain oil wealth; tales of a proud culture with a rich, palimpsestuous heritage; and a badass doyenne de cuisine screaming Azeri incantations at her stew to summon forth the full flavors of walnuts and pomegranate. — Max Falkowitz, executive digital editor 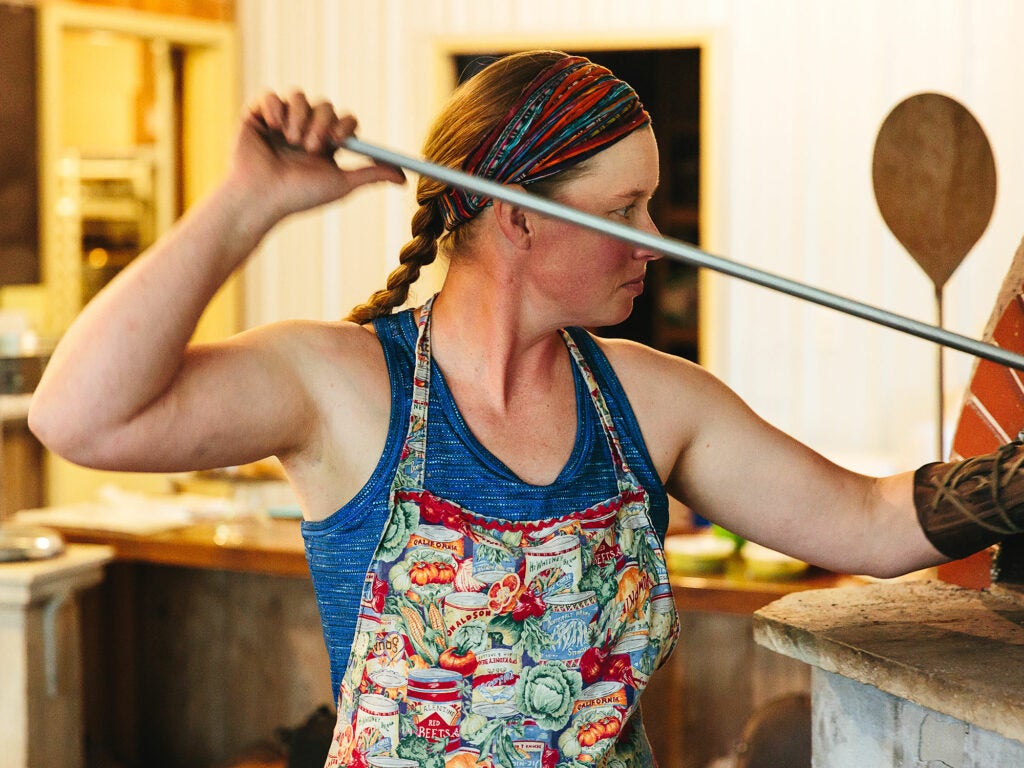 Can Pizza Night Save the Midwest’s Small Farms? , Kat Craddock

Heather Seacrist putting a pizza in the oven.

Test kitchen associate Kat Control heads to the Midwest to report on how rural Wisconsin entrepreneurs are using “pizza farms” to take a stand against Big Ag and other competition. There’s also a great list of pizzerias to add to your list if you find yourself in Wisco. — Dan Q. Dao, deputy digital editor 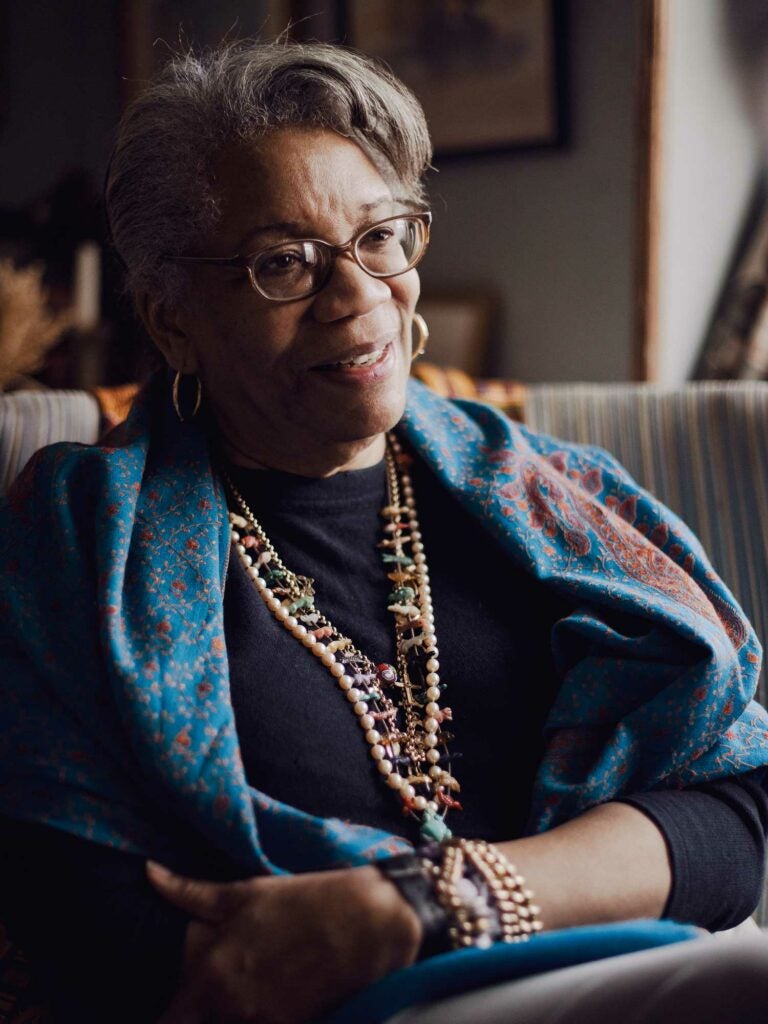 Jessica B. Harris recalls the summer of 1973, which she spent in Saint-Paul-de-Vence, as the great James Baldwin’s houseguest. Full of the region’s lusty, signature cuisine—lamb, soupe au pistou, plenty of Bandol—Harris’s essay is at once a flashback to the sunny holiday of her own youth and a glimpse into the life of one of the most important American voices of the last century. — Kat Craddock, test kitchen associate 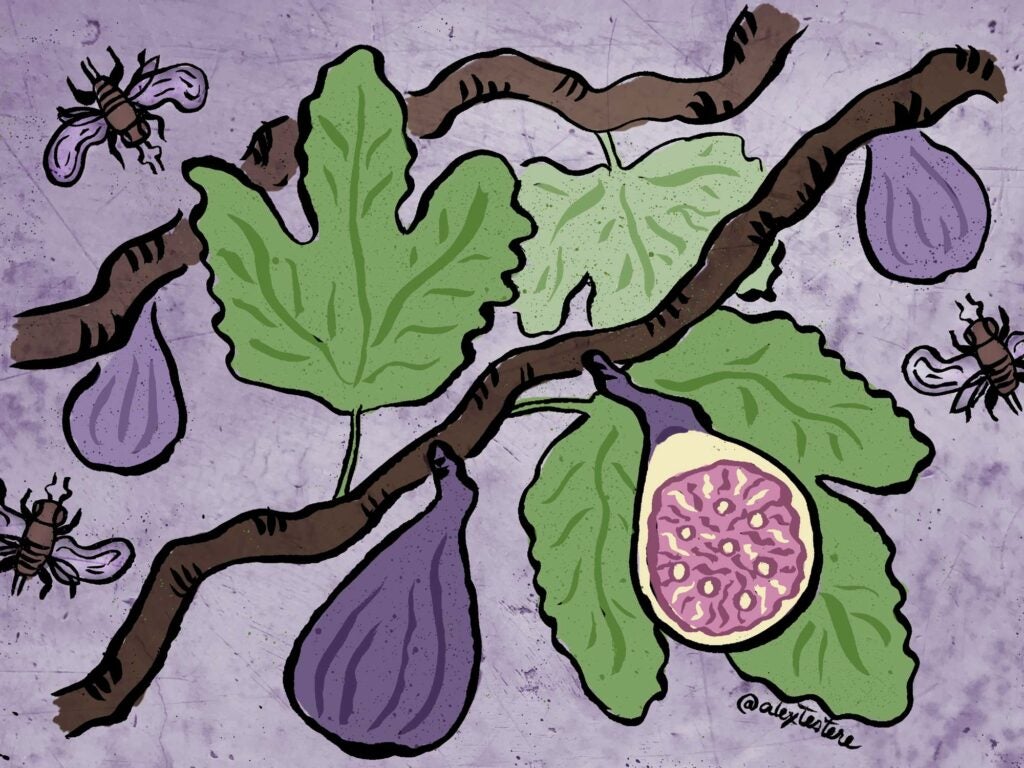 Evolution is so cool.

“It starts with sex and ends with violence” sums up the strange relationship between fruits and fruit wasps. Associate editor Alex Testere’s take on the weirdness of nature—accompanied by his original illustrations—brings food and science together in an unexpected and fascinating way. — Dan Q. Dao, deputy digital editor 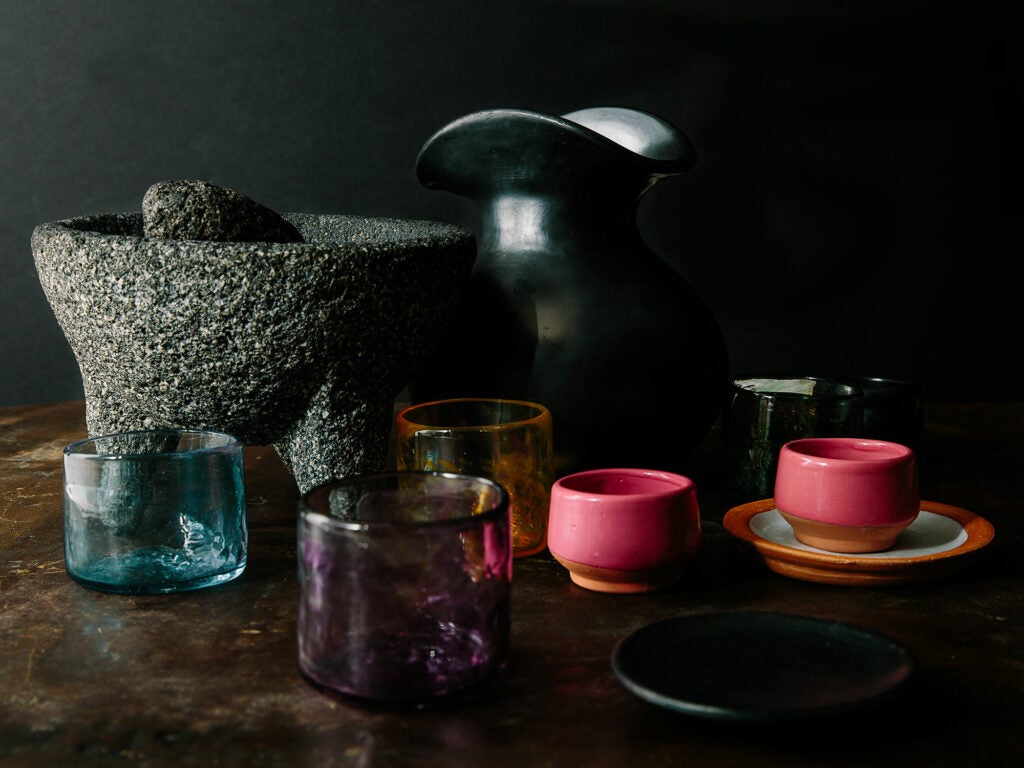 Max Falkowitz wrote this piece after a trip to Oaxaca, where he stocked up on a lot of envy-inducing pottery and kitchen tools. This roundup covers everything from beautiful glassware to my absolute favorite clay jug, and has me wanting to redo my kitchen right now. — Katherine Whittaker, associate digital editor 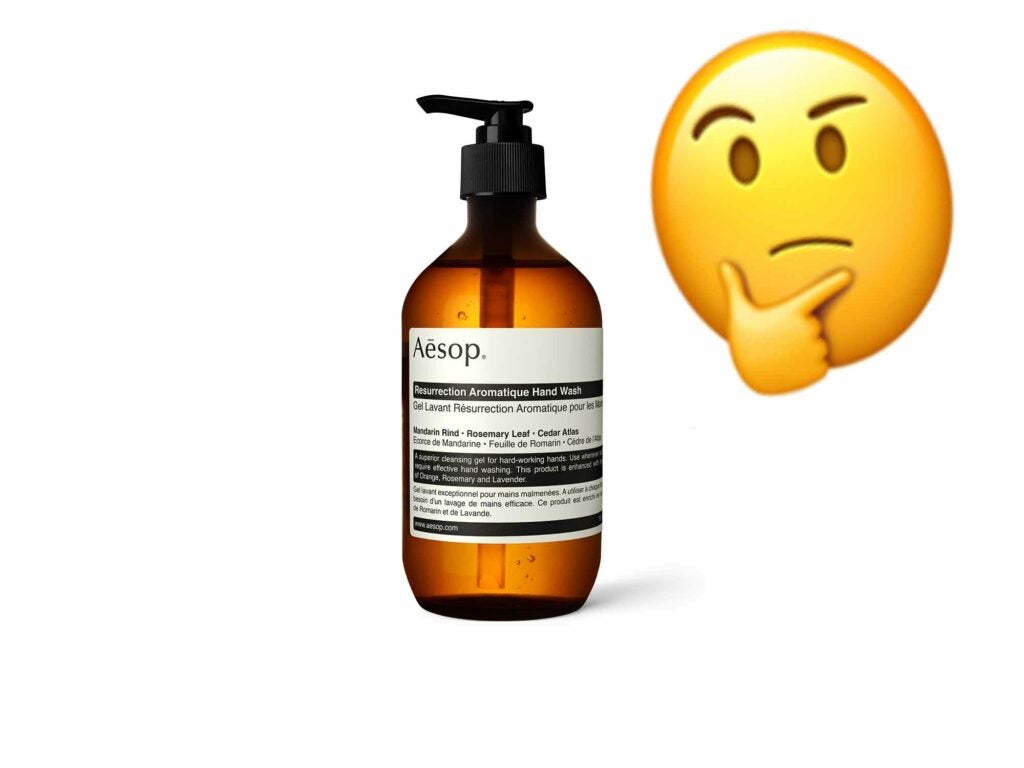 Why is the soap at fancy restaurants more expensive than the food? Alex Ronan’s thinkpiece—with an assist from senior editor Chris Cohen—dives into the back story of Aēsop’s ubiquity in high-end establishments. — Dan Q. Dao, deputy digital editor 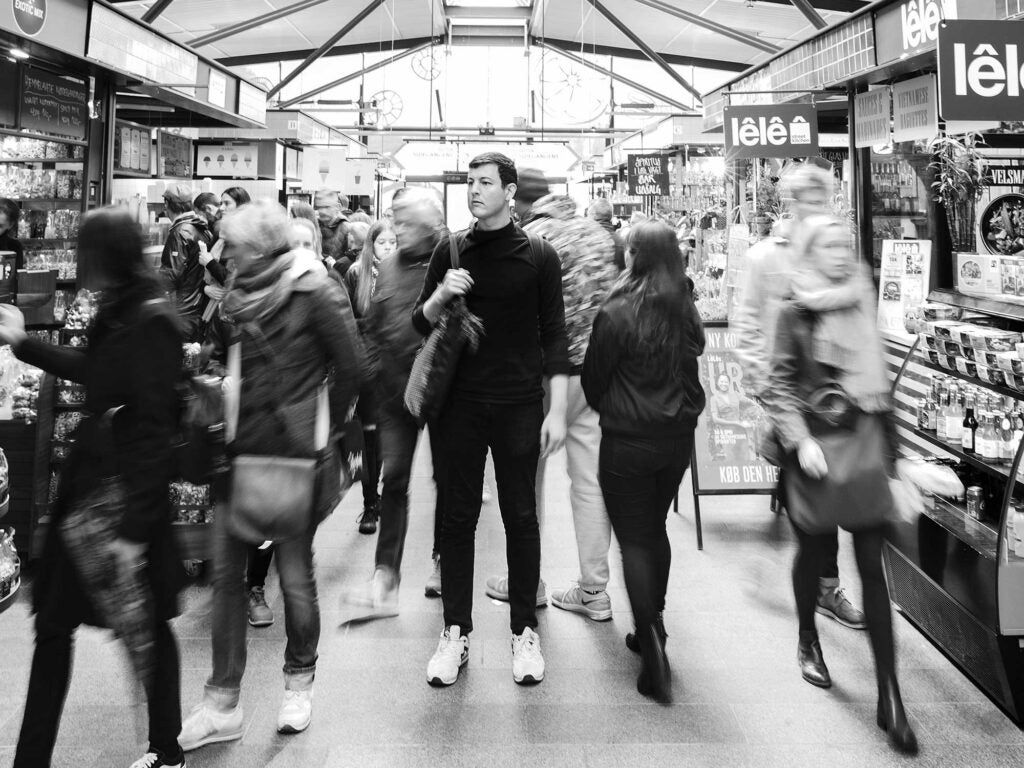 What Would it Take for an American Guy to Become Danish?

Andrew Richdale wrote a nice piece about the urge to choose another nationality while traveling in Copenhagen—a pretty relatable impulse in 2017. — Chris Cohen, senior editor 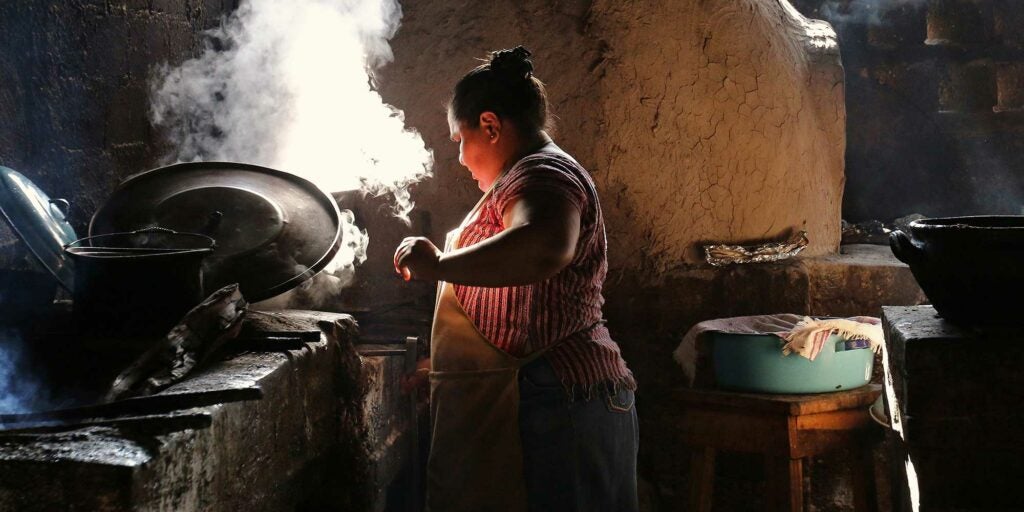 Most of the food at Na Vicenta is cooked in a wood-burning clay oven that stands guard over the restaurant’s entrance and was the only thing damaged in the September 7 earthquake that devatated much of the town.

After reading this story, I really want to meet the “queen of the comal,” Vicenta Guzman Gutierrez. Following the September 7 and then the September 23 earthquakes, Auntie Vicenta kept her restaurant open, serving melelas, shrimp, fish, and totopos de crema to a community hit hard by natural disaster. “Everyone has to find a way to live, a way to fight,” she says, “so you stick to traditions.” — Katherine Whittaker, associate digital editor 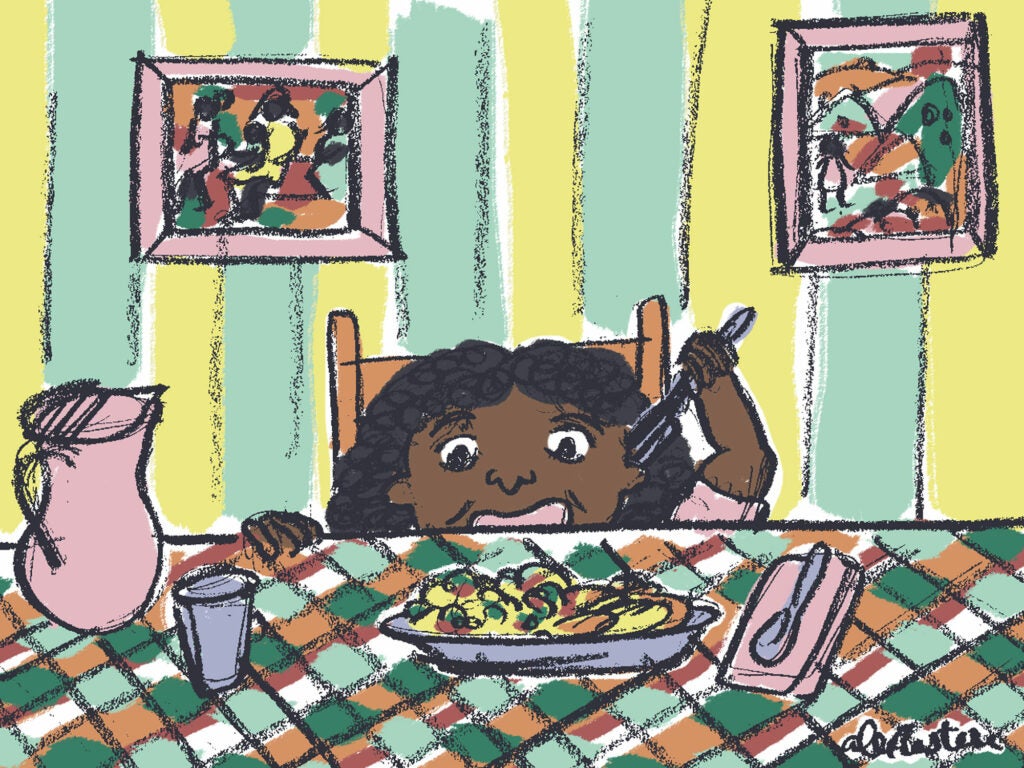 Jamaica’s National Dish is an Immigrant to its Own Shores , Bee Quammie

“The mystery that remains is how ackee and saltfish were eventually paired together—I imagine that first kitchen mastermind had no idea their invention would become as impactful a Jamaican phenomenon as bauxite and Bob Marley.”

I loved this personal essay by contributor Bee Quammie that reconsiders the globe-trotting journey of Jamaica’s ackee and saltfish, and what its improbable invention reveals about the Jamaican soul. For anyone who grew up between cultures, especially ones with tumultuous colonial histories, this is a close-to-home exploration of what our favorite dishes tell us about ourselves and where we come from. — Dan Q. Dao, deputy digital editor