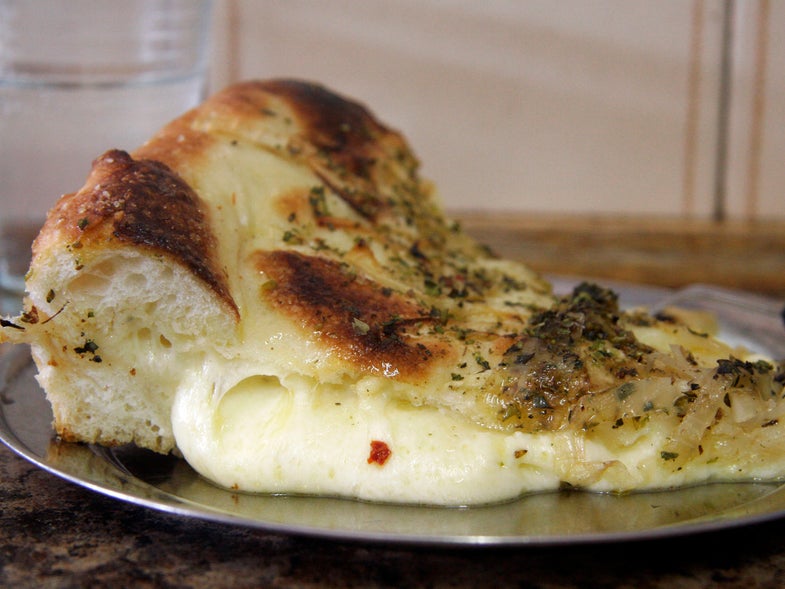 If you want to witness a real Porteño brawl, insult an Argentine’s pizza and watch the argument ensue—the country is more than just the land of beef. Conversely, in Buenos Aires, the self-proclaimed pizza capital of South America, there are more pizzerias than steak-centric parrilla restaurants, and many locals proclaim that the high-rising, cheese-smothered slices rivals those of New York, Chicago, and Italy.

“Asado may be the national dish of Argentina, but pizza is the great love of Buenos Aires,” says Daniel Young, author of Phaidon’s Where To Eat Pizza. “In very few cities is the local pizza culture so pervasive and powerful as it is in Buenos Aires.”

Half of the Argentine population comes from Italian descendants, so it makes sense that pizza is such a big deal. Working class immigrants brought it over in the late 1800s starting with Naples native Nicolas Vaccarezza, who made the first documented pizza in his La Boca bread oven in 1882. He topped the dough with accessible and affordable ingredients, which in Argentina meant cheese and tomatoes. Over the next decades, immigrants continued to settle and the city experienced an explosion of pizzerias that strayed far from its Italian origins. A whole new pizza beast emerged, oozing with extra cheese on top.

In the local pizza realm, there are six major varieties, but all (except for one oddball) share a similar trait: Cheese must be in abundance. “When you talk to the average Argentine about pizza, they won’t mention the dough,” says Pietro Sorba, an Italian born journalist and author of the book Pizzerias of Buenos Aires. “They will tell you about the quantity of cheese. The amount of cheese is a benchmark for quality, so the more cheese the better.”

Almost every pizza menu will serve standard flavor combinations like “muza” (mozzarella-like queso de barra cheese); “napo” or napolitana (not to be confused with napoletana style pizza) with cheese, sliced tomatoes, garlic, dried oregano and a few green olives; jamón y morrónes with cheese, sliced deli ham, and canned roasted red pepper; plus the occasional provolone, blue cheese, hearts of palm, and chopped hard boiled egg situations. You’ll also likely see slices served with fainá, a dense chickpea pancake similar to a dry piece of baked polenta. It traces back to Genoa’s farinata (and is similar to southern France’s socca), but only in Argentina and parts of Uruguay is it placed directly on top of a piece of pizza and eaten together in one double decker bite. The origin of this peculiar combination isn’t so well documented, but some pizzeros claim it dates back to when soccer stadium vendors would sell portions of pizza and fainá; customers would ask for both, so this was the most practical way to serve each food. Think the city’s pizza culture sounds nuanced and bizarre? Same—but it’s one worth getting to know.

Below, the six main pizza styles (and where to get them), slice-eating etiquette, and pizza-drink pairings: 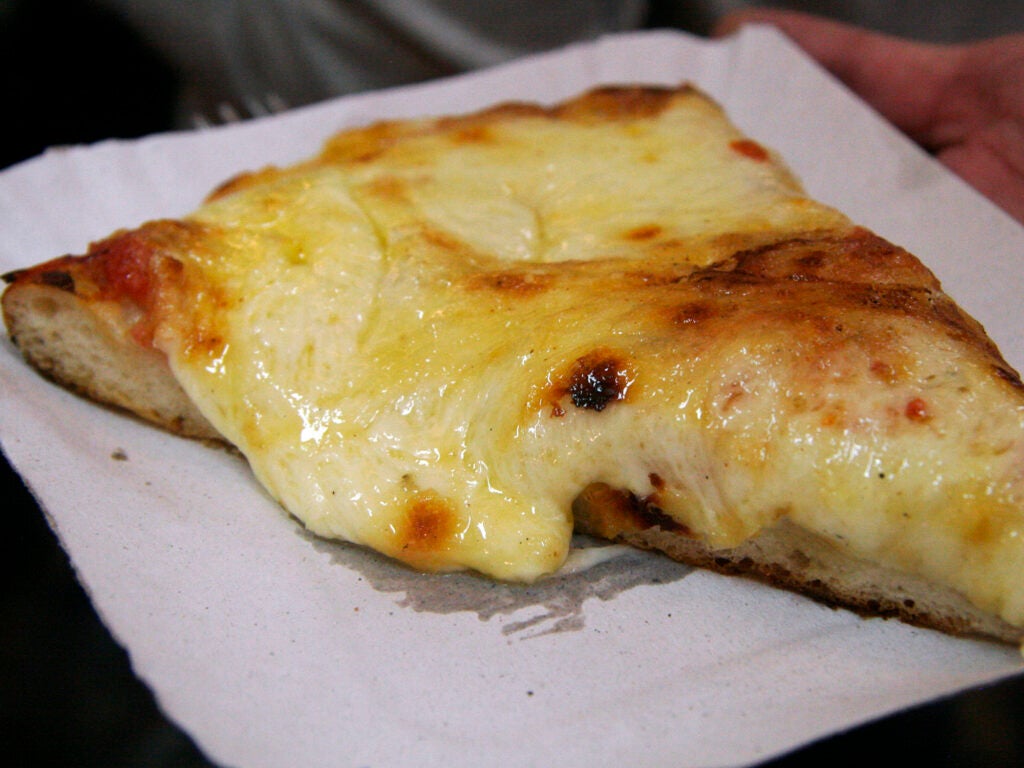 Translating to “pizza in the pan,” pizza de molde is the most characteristic Argentine style. It has a thick, spongy base and elevated bready crust—it’s bread city, cheese paradise. Most all of the classic Porteño pizzerias specialize in pizza de molde. This style consists of a high-rising alta masa (high dough), generally reaching at least 2 cm, or a media masa (half dough) coming in at around 1.5 cm in height, and cooked in…yes, a pan. It’s similar to focaccia bread in which both the crust and inner dough have the same thick, spongy texture. When made right, the base has a sturdy crunch and the top overflows with a small amount of sauce and a lot of bubbling cheese that dreamily crisps at the bottom of the pan. Because pizza de molde is so thick and cheesy, the average eater only consumes about two slices.

Pizza de molde has created such furor that the annual Muza5k leads 400 people on a mozzarella pizza marathon that spans five kilometers across Corrientes Avenue, a major pizza street in downtown BA. The pizza marathon “runners” stop in numerous classic pizzerias for one slice of cheese pizza in each. 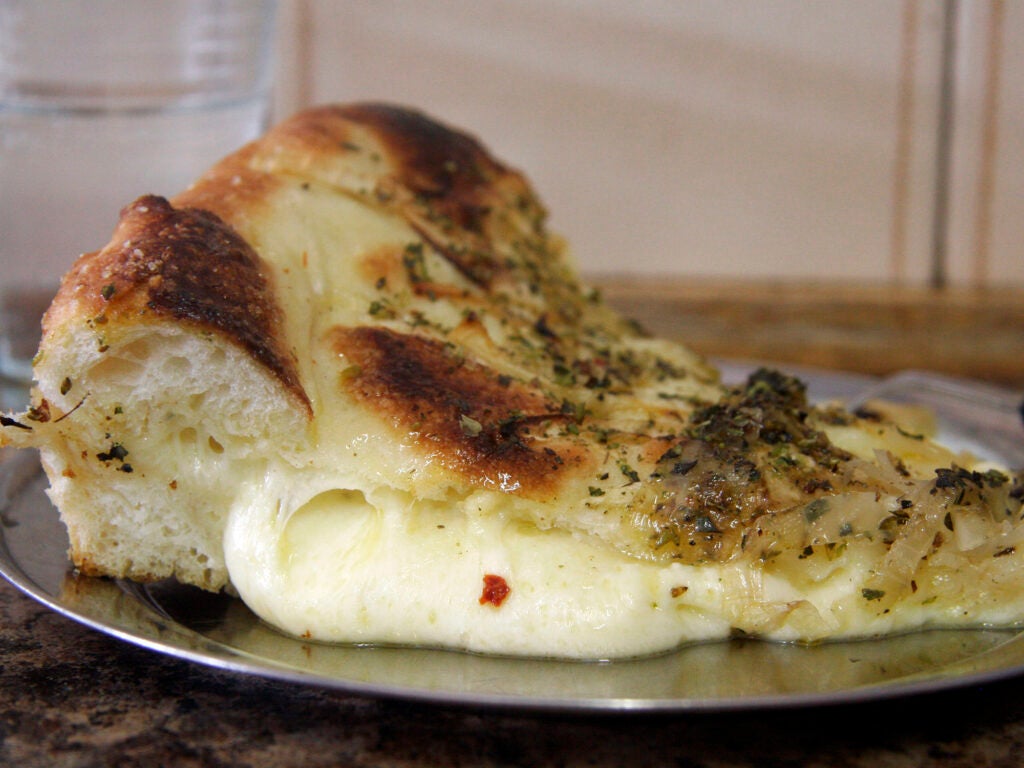 If you’re a fan of onions and cheese, this is the pizza for you. Fugazzeta technically lives in the de molde family tree, but due to its pure oniony genius, the monster slice deserves its own category. The story goes something like this: Juan Banchero, son Italian baker Don Agustín, tried to save his dry, sub-par fugassa alla Genovese (Genoese focaccia) by slicing it down the middle and stuffing it with cheese. The result: a tomato-less pizza like none other that averages nearly two pounds of cheese per large pizza.

While each pizzeria may differ in exact terminology, there are a few deviations to take note of. The fugazza is a pizza de molde smothered in onions and topped with olive oil, salt, and sometimes just a sprinkle of Parmesan cheese. The fugazza con queso or fugazzeta is the same as the first except there’s an added mozzarella cheese-bonus on top. Taking it to the next level, the fugazzeta rellena (stuffed fugazzeta) is what food dreams are made of: It’s stuffed with an obscene dose of queso de barra mozzarella and covered in sweet, soft onions. Add an extra thin slice of deli ham to the cheese and you have the fugazzeta rellena con jamón. 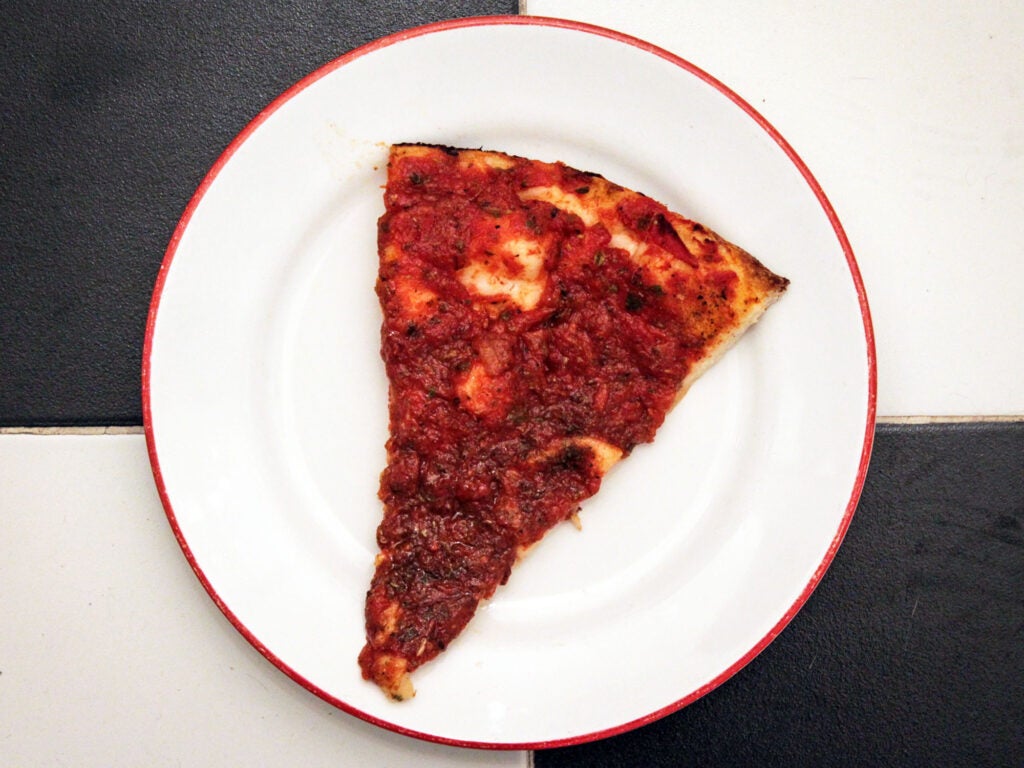 One of the most well-known pizzas de media masa (half dough pizza) remains a total anomaly, debunking everything we know to be true about Argentine pizza. The pizza canchera, (also known as pizza de cancha) is a cheese-less pizza covered in a red sauce and heavily seasoned with garlic, onion, and non-spicy red pepper flakes, similar to what you would find in bakeries across Southern Italy. In Buenos Aires, pizza canchera was originally sold outside soccer stadiums, hence the name: Cancha means field in Argentine Spanish. These slices tends to be shorter than most de molde pizzas, and have an airy dough, a firm crunchy base, and a lot of sauce. 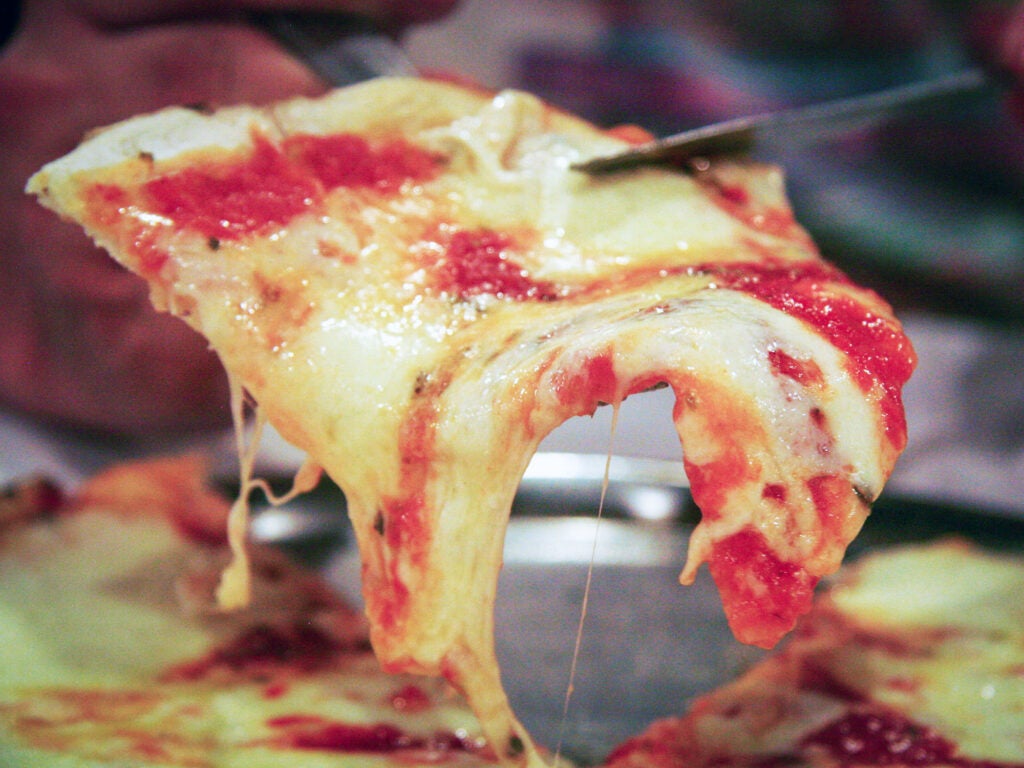 Pizza a la piedra, which translates to “pizza cooked on a stone.”

In recent years, pizza a la piedra, or pizza baked on a stone, has given the thick crust a run for its queso. Made in a wood-fired or gas oven, this lighter slice comes out with a crispy thin crust that is slightly chewy. A good amount of tomato sauce is spread on top, along with a healthy helping of cheese and fresh toppings. Many consider this type of pizza to be more modern, and pizzerias have adapted their original concept to add this style to its repertoire. 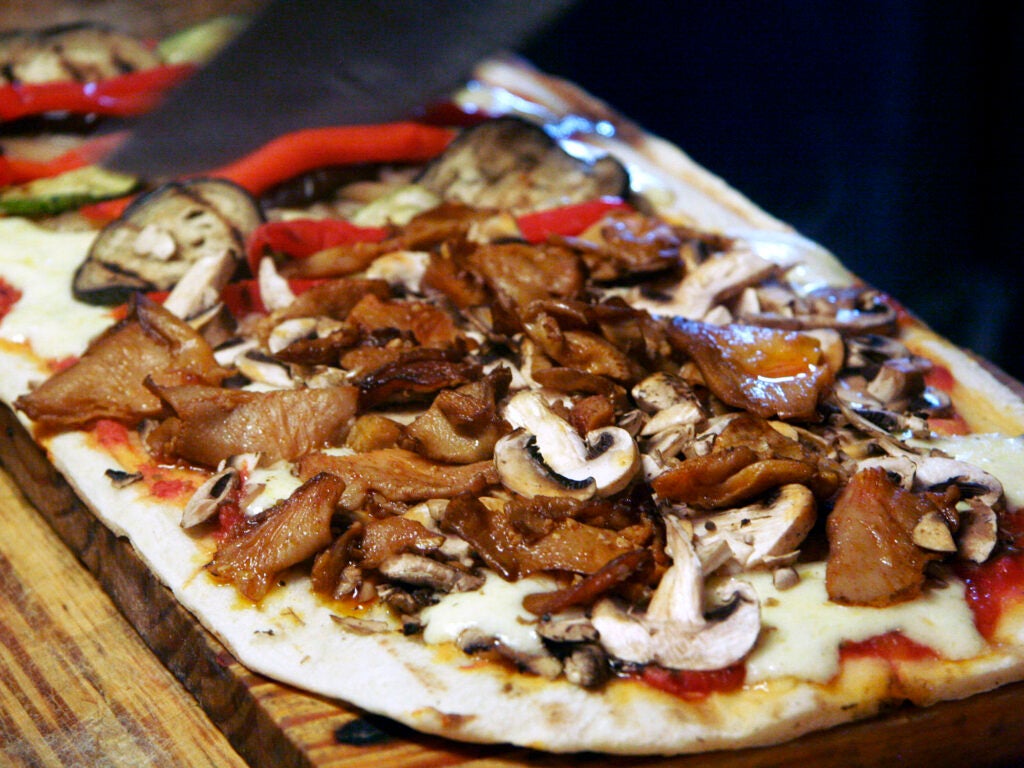 Grilling is Argentina’s most treasured pastime, and the grill the most cherished appliance, so it’s only natural for the great parrilla to join forces with this pizza. Restaurants serving pizza a la parrilla, or pizza on the grill, give an alternative to the bready tradition while honoring another. The ultra-thin, delicate dough is grilled over hot coals on one side for five minutes, then flipped over and topped with minimal ladles of red sauce, a variety of fresh ingredients, and cheese, before being grilled for five to seven minutes longer. The result: a cracker-thin crust that crunches with every bite, joining two culinary rites of passage. 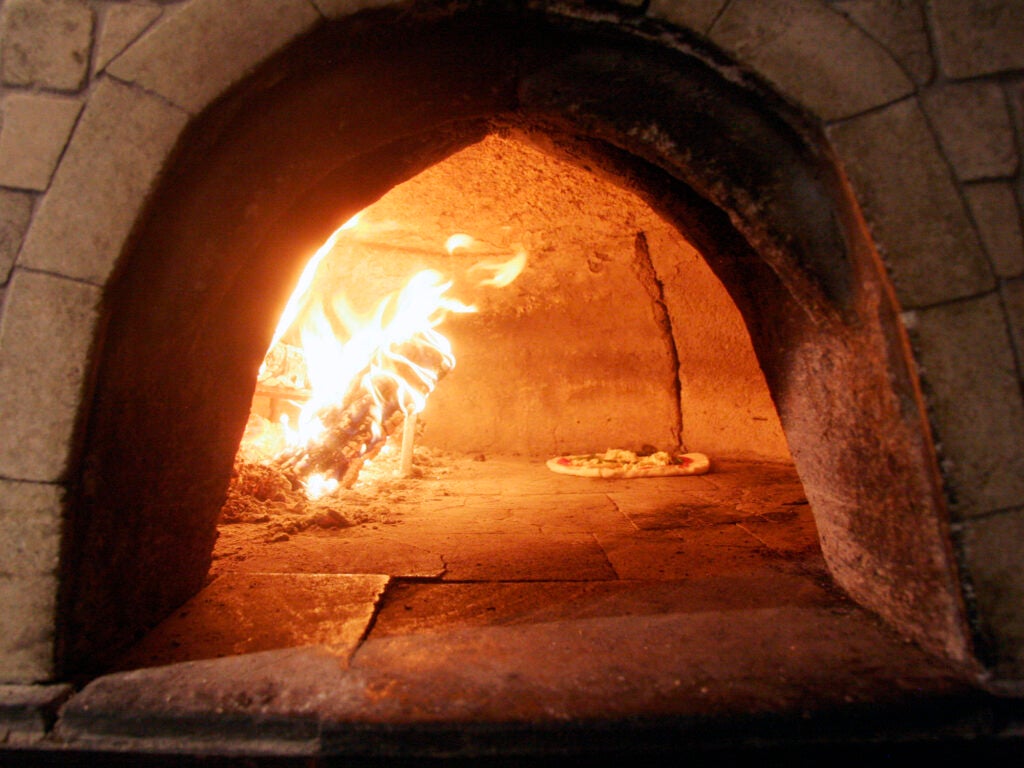 A pizza napoletana cooks away in the oven.

Even though Buenos Aires abounds in Italian influence, you can count on one hand the Porteño pizzerias that actually honor the traditional way to make pizza. While many locals reject the chewy-thin crust, flavorful sauce, and easy-on-the-cheese way of life, Italian styles like pizza napoletana and pizza romana are slowly capturing the hearts of those who truly appreciate quality ingredients over quantity of formaggio. 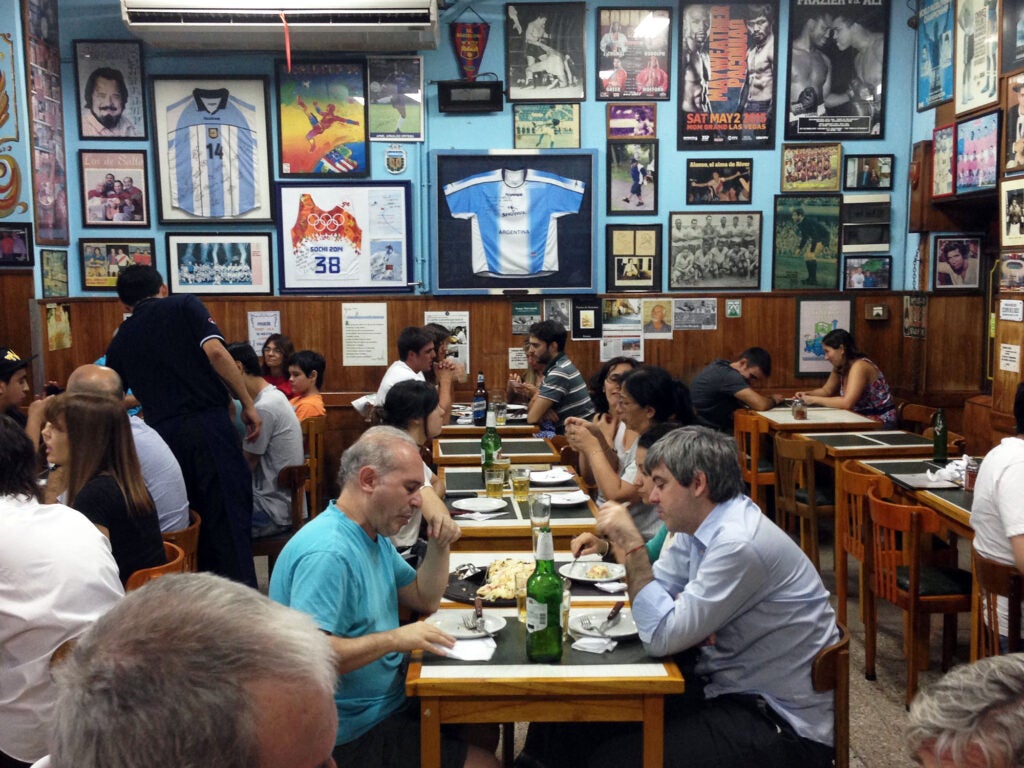 Locals sit down in El Cuartito, an old-school pizzeria.

Understanding the local pizza culture is just as important as learning the varieties. First of all, locals never pick up pizza with their hands—in Argentina, pizza is eaten with a fork and a knife. But what is an option is how you position your physical body. Most old school pizzerias have two seating areas—one area for groups to sit down and order entire pies and another self-service standing room only section for the serious pizza fanatics who eat their corte (slice) de parado (standing up).

As for the ideal beverage pairing, many wash pizza and fainá down with a liter of national Quilmes beer, or the more customary choice, cheap and sweet moscato from Bodegas y Viñedos Crotta. There’s even a famous Argentine rock song, “Moscato, pizza y fainá“, dedicated to this eating ritual, because as you’ve learned, Buenos Aires doesn’t mess around.