Here’s How to Brew Iced Tea Like a Pro

Tips from a converted hot-tea devotee. 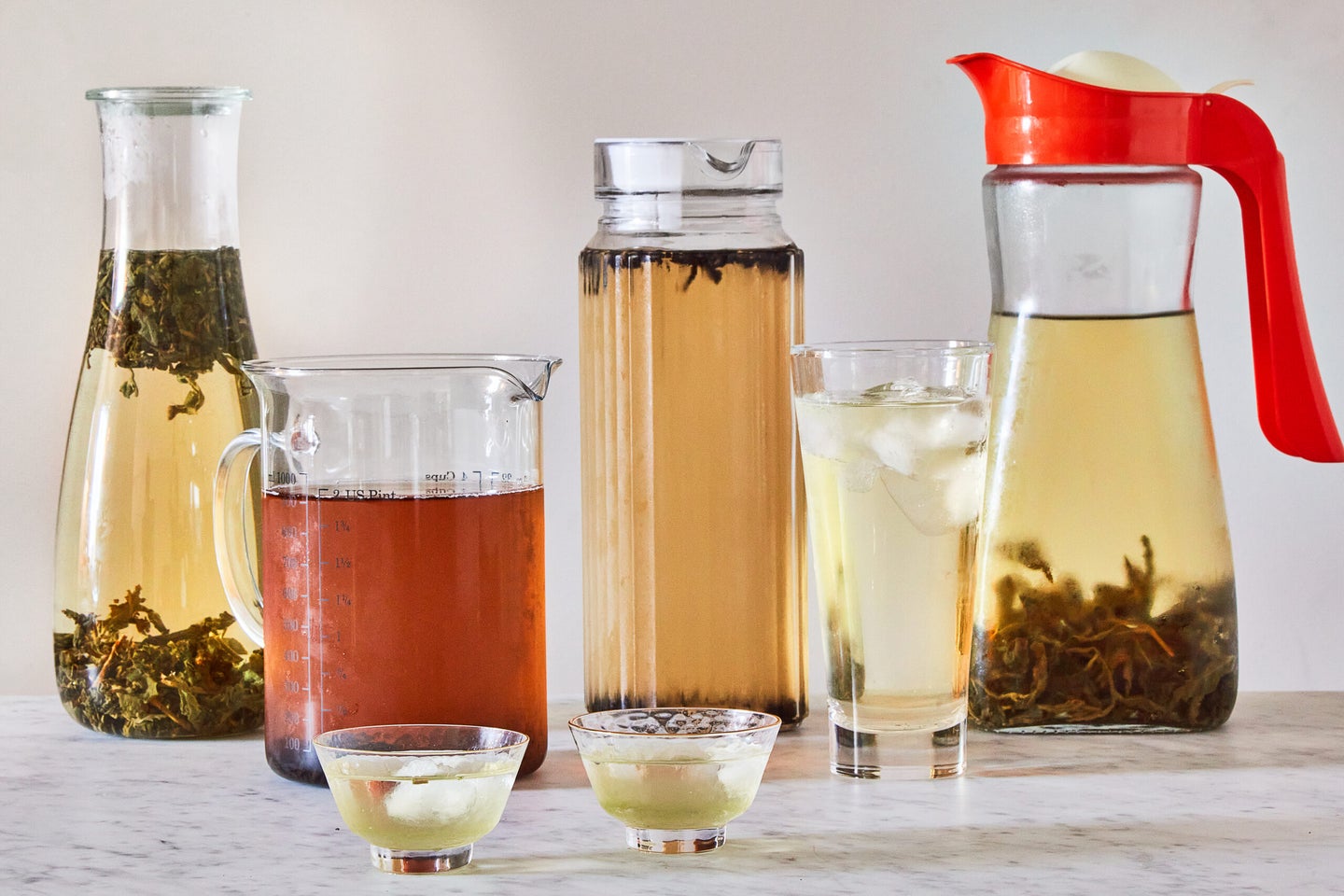 Call it stubbornness, but I drink plenty of hot tea in the summer. At my table, warmer weather just calls for a different type of hot tea, even if it means setting my kettle a foot or two further away from me. Ancient Ayurvedic scholars and traditional Chinese Medicine introduced the idea of the heating and cooling properties of food—a concept modern scientists have also recently begun to explore. Younger green teas and greener-style oolongs are believed to have a cooling effect on the body, even when enjoyed hot. But despite my predilection for piping-hot tea all year round, on the very hottest of summer days my throat parches for properly iced tea.

Here in the States, iced tea is the norm. In fact, well over 80 percent of tea is enjoyed iced in the U.S.; this is in stark contrast to just about everywhere else, where by and large tea is preferred hot. However, the world is trending towards doubling its iced tea consumption over the next decade, and there are as many opinions on how to brew iced tea as there are countries that make it.

But how many glasses of iced tea have truly awed you? Most premade versions are light, lacking in body, and leave you thinking: yeah, that’s leaf water, alright. But iced tea doesn’t have to be that way. Cold-brewing tea allows us to experiment with texture and tannin. Dissolving sugar separately before adding to Southern-style sweet tea results in a crystal clear finish. A few simple tweaks to your technique can yield an extraordinary beverage with very little extra effort. Here are three different ways to brew excellent iced tea:

How to Cold-Brew Iced Tea

Brewing tea hot and fast will result in rapid and nearly complete extraction—but devotees of cold brewing have other ideas. In Nicole Wilson’s new book, The Tea Recipe Book, cold brewing appears frequently and in many forms, from cold-brewed oolong, to American-style sweet tea, to Thai bubble tea. Cold brewing is one of Wilson’s favorite methods both for its ease, and for its ability to produce a smooth taste with very little astringency. Whole-leaf tea naturally has both sweetness and bitterness, and tea acolytes practice over and over to get just the right balance from their brew. The leaves’ natural tannins, once overexposed, are hard to ignore once they’ve made it into your cup. Cold-brewing slows down the extraction process considerably, making it much easier to brew a sweet, more nuanced tea. This is also why many iced tea drinkers favor green teas over black ones, as black teas tend to be much higher in tannin. But don’t be afraid to experiment. With this method, Wilson notes, “green tea works particularly well…but you can cold brew just about any kind of tea.”

There is an art to cold brewing, and thankfully, irreverent tea monks like my friend Max Falkowitz are here to help. Years ago, Falkowitz taught me that hot-brewed tea, once chilled in the fridge or iced, has a tendency to taste stale. Instead, start with room temperature water.

Step 1: Place Tea Leaves in a Heat-Proof Pitcher and Rinse

Place your tea leaves in a heat-proof pitcher, give them a quick rinse with hot water, then strain and discard the water, leaving the leaves in the pitcher. For one liter of water, use double the amount of leaves you would use for hot tea (eight to 10 grams is usually enough).

I advise rinsing any tea that you use. This helps to wash away any dust or debris that may have settled on the leaves during processing and allows the pure taste of the tea to shine. This also helps to open up the whole leaves—open leaves extract more evenly.

Step 2: Fill with Water and Refrigerate

Fill the pitcher with cold water and refrigerate overnight. This method is often called mizudashi in Japan. The tea leaves will slowly unfurl and extract over the course of eight hours. It’s difficult to over-extract using this method, and most tea won’t taste noticeably over-extracted even if it’s been brewing in the fridge for over 24 hours. Tea brewed using this method forgives even the most egregious of overbrewing sins.

If you like, begin tasting the tea every hour after eight hours of brewing, noting any strengths or flaws along the way. When you’re ready to enjoy a cup, simply decant the tea over a glass of ice. (Avoid adding ice directly to the pitcher, which will result in over-dilution.)

Koridashi is a slow, mindful method for making iced tea. The practice has been used in Japan since as early as the 19th century when ice farmers first hawked their wares at market. The technique is simple, and doesn’t even use liquid water! Simply place ice in a brewing vessel (usually a small bowl), sprinkle leaves over the ice, and wait for the ice to melt. High-end gyokuro, or shade-grown Japanese green tea, is often served this way, as this method draws out the leaves’ natural umami flavor and texture.

This technique is particularly exciting and unusual, as it prioritizes the body of the brew. Koridashi-style iced tea can take hours to fully melt, so it is also an exercise in patience. Thankfully, there’s a middle ground for tea lovers looking for a quicker cup.

Step 1: Fill Your Bowl with Ice

In a medium sized heat-proof bowl, place ice cubes to fill most of the container. The freshness and quality of your ice is paramount here. The vast majority of your tea is water, and any off-flavors in your ice will sully your iced tea.

Place your tea leaves (around five to eight grams) over your ice. Japanese and Chinese green teas work best in this method, as the leaves are fairly small, with thin cell walls to extract from. (Rolled oolongs and black teas will also work with this method, but take significantly longer to extract.)

Step 3: Pour Water Over the Ice

Pour room temperature water over the ice, to come halfway up the sides of the bowl. The rest will be filled as the ice melts. Set aside until the ice has melted halfway, 10 to 30 minutes. Teas brewed using this adapted Koridashi method result in different flavors and textures than brewing using only ice.

Step 4: Pour the Tea into Cups

Pour the brew into cups to stop the extraction process, or drink directly from the bowl. The oldest methods of brewing tea are also the simplest: just a bowl, leaves, and water. The skill here is knowing when to drink.

Tea purists will squawk: Tea should be enjoyed plain, with no milk or sugar. But that’s not how most of the world enjoys tea. There is no one right or wrong way to make iced tea, just better methods suited for different palates. Chai was invented by the South Asians during imperialistic rule by the British. Hong Kong milk tea originated in similar conditions. Tea meccas like Taiwan proliferated bubble tea across the world. And in the American South, sweet tea is a tradition long held dear. If you have tea bags that contain finely chopped “CTC” (crush-tear-curl) tea, try brewing up a pitcher of this cookout classic; the added sugar and a squeeze of lemon will help balance the black tea’s intense tannins.

Step 1: Bring One Quart of Water to a Boil for Tea

Bring one quart of water to a boil and add two quart-sized tea bags, or five single-serve tea bags. Immediately turn off the stove and let it steep.

Step 2: Separately Stir Water and Sugar in a Pitcher

In a half-gallon pitcher or jar, stir together one quart of cold water and one cup of white sugar.

Step 3: Pour Hot Tea into the Pitcher of Sugar Water

Remove and discard the tea bags, then pour the hot tea into the pitcher. Stir until the sugar is dissolved. (Adding the hot tea to the cold sugar water, rather than the other way around, helps keep the tea clear and preserves its flavor.)

Refrigerate until you are ready to serve, then pour over ice and garnish with lemon wedges, if desired. After all, you should take your tea how you like it. 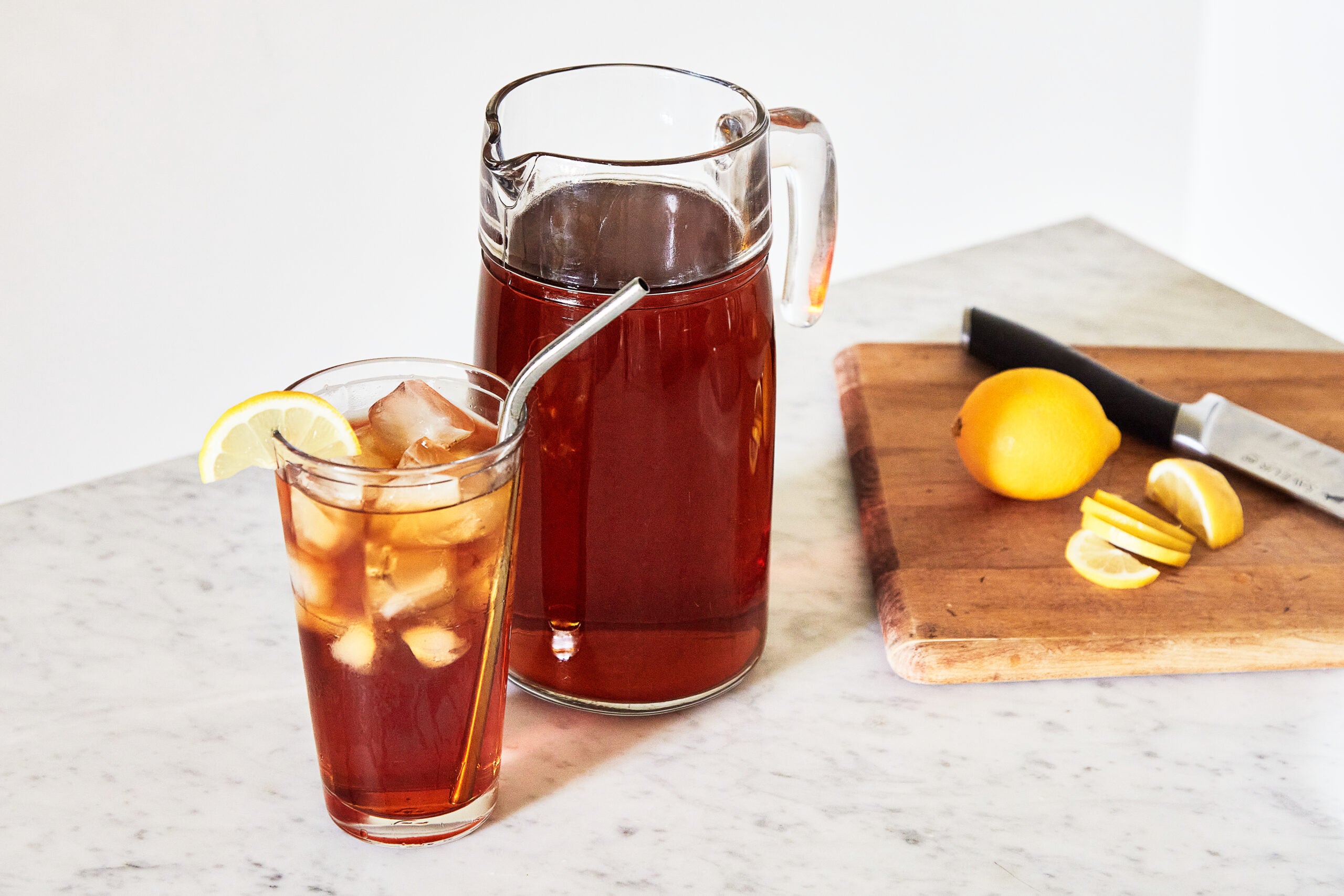 Coffee & Tea
How-To
How To
Tea