An All-American Cheese From the Atomic Age

Straight out of sci-fi, this quirky Midwestern wheel is the product of radiation, mutant mold, and one Wisconsin scientist’s imagination. 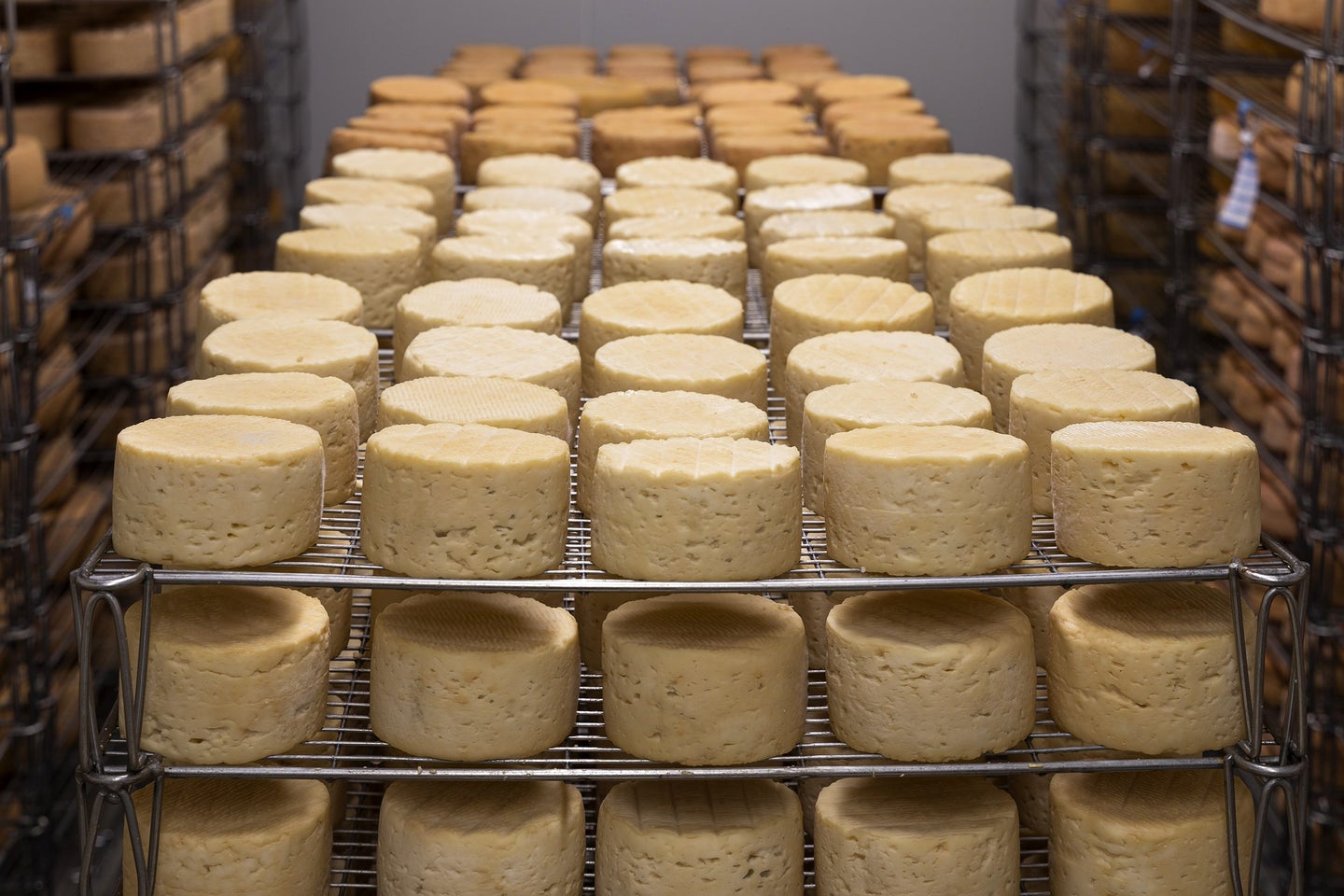 Nuworld cheese is an American cult classic. Born out of nuclear research over 70 years ago, only the most devout of turophiles and science history buffs have even heard of—let alone tasted—the stuff. But despite its low profile, the wonderful weirdness of this biologically fascinating wheel makes it one worth seeking out.

The year was 1947. The place, University of Wisconsin-Madison. Bacteriology professor Stanley Knight had long admired the research of Nobel laureate H.J. Muller, whose body of work within and after the Manhattan Project focused on mutations in living things exposed to radiation. Muller’s research had been weaponized, but his findings got Knight thinking: Could the science behind radiation-induced mutations be used for productive ends—to make a better piece of cheese? It was a highly Wisconsonian quest.

Knight wondered what effect radiation might have on molds used in cheese ripening. Such a line of inquiry may sound wacky today, but Knight was the kind of enterprising mad scientist who spent his free time making cheese in beakers and pressing curds with textbooks. Postwar America was obsessed with efficiency and affordability and the dairy industry was no exception.

Of course, Wisconsin was at the epicenter of midcentury dairy science. The University of Wisconsin-Madison was keenly focused on finding ways the cheese industry could increase production, and Knight’s personal bailiwick was microbes—specifically, how bacteria and mold interacted with milk to help make better, tastier cheese. Inspired by Muller’s research, he set out to determine whether ultraviolet (UV) light—a mild form of radiation—affected the growth of one of these microbes in particular: Penicillium roqueforti, the mold in blue cheeses like Roquefort, Stilton, and Gorgonzola.

Petri dishes in hand, Knight made a beeline for the only place he knew that was outfitted with UV lights, a nearby greenhouse. He anxiously set up his moldy experiments, fixed his eyes on the samples, and waited for something to happen. Several days later, he saw it: One of the dishes was still growing mold, but unlike the other samples, this mold was colorless! What was this mutant, pigment-less “blue” mold, he wondered.

The next logical step was to find out if the strain could be used to make cheese. Knight pitched his newly created mold in some milk and went about the usual cheesemaking process: fermenting and coagulating, cutting curds, and pressing those curds into a wheel. Upon aging this experimental cheese, Knight found that it had all the hallmarks of a standard blue—pungent aroma, piquant flavor, and a spreadable texture—all without a single blue vein. Amazingly, he had created the world’s first white blue cheese. A product of the future, the cheese was christened, appropriately, “Nuworld.”

Knight’s experiments were, scientifically speaking, a success. However, even in Wisconsin, nobody really knew what to do with a visually unremarkable cheese bursting with flavor akin to the punchiest Stilton. The professor eventually shared his recipe with the University of Minnesota, where it is still produced today.

One of Nuworld’s biggest advocates is Dr. Mark Johnson of the Wisconsin Center for Dairy Research, a world leader in cheese science. He recalls Knight’s ingenious application of UV light to encourage mutation, which until then was more commonly used to disinfect surfaces (UV radiation destroys microbes by damaging their DNA). “Knight used a mild form of this reaction to tweak the DNA instead of harming it,” Johnson explains, which got rid of the blue pigment while leaving the rest of its metabolic machinery intact—like how a hailstorm might pummel a car’s exterior but not its motor and upholstery.

What’s the point of a blue cheese that isn’t blue? As Johnson points out, “Nuworld’s appearance is lackluster, but when used as an ingredient, its white color becomes useful, since mixing blue cheese into sauces or dips results in an unsightly gray.” But there are downsides. People know what to expect from blue blue cheese—that signature robust, tangy flavor. Without those visual cues, a “white” blue can be unpleasantly jarring.

“Whether we realize it or not, we eat with our eyes,” says Cowgirl Creamery‘s Rory Stamp. “Nuworld is a niche product and probably won’t ever gain popularity for that reason.” And he might be right: Only one venue, the University of Minnesota Dairy Salesroom*, sells Nuworld today, and even there, it’s relegated to the “limited availability” bin due to low demand. However, the cheese’s restricted production doesn’t stop fans from waiting in line to buy it.

Johnson sees potential in spotlighting the science that makes Nuworld special—after all, we’re talking about a sci-fi cheese from the atomic era. “Once folks understand the million-to-one mutation that occurred, they may begin to understand how special this product is,” he says. The Penicillium roqueforti strain can put on a flashy show while creating an extraordinary bouquet of aromas. Johnson explains how the flavor comes about: “[Penicillium roqueforti] mold targets the fat molecules in the cheese and causes them to break down into smaller, more flavorful components.” Both the mildest butter and the strongest blue cheese start with the same milk, but the mold’s metabolism has the power to transform that neutral base into something sensorially remarkable.

Marketing considerations aside, Nuworld cheese is a testament to how a scientific discovery can have far-reaching and perhaps lasting impact in a totally unexpected way. Knight’s oddball science experiment resulted in a product that embodies the postwar spirit of discovery and invention. From Muller’s work on the atomic bomb, to Knight’s UV tinkerings, to gift-shop wheels of blue-less blue cheese, Nuworld is proof that food science is more than a body of knowledge—it’s a never-ending endeavor to improve how—and what—we eat.

*Note: the University of Minnesota Dairy Salesroom is temporarily closed due to pandemic-related restrictions.

Pat Polowsky is a food scientist at the Wisconsin Center for Dairy Research and a 2018 SAVEUR Blog Award winner for his website, Cheese Science Toolkit.