The Story Behind 2022’s Most Viral Salad

Move over, green goddess—according to food insiders and tastemakers, this two-ingredient side or starter is what everybody should be eating this summer. 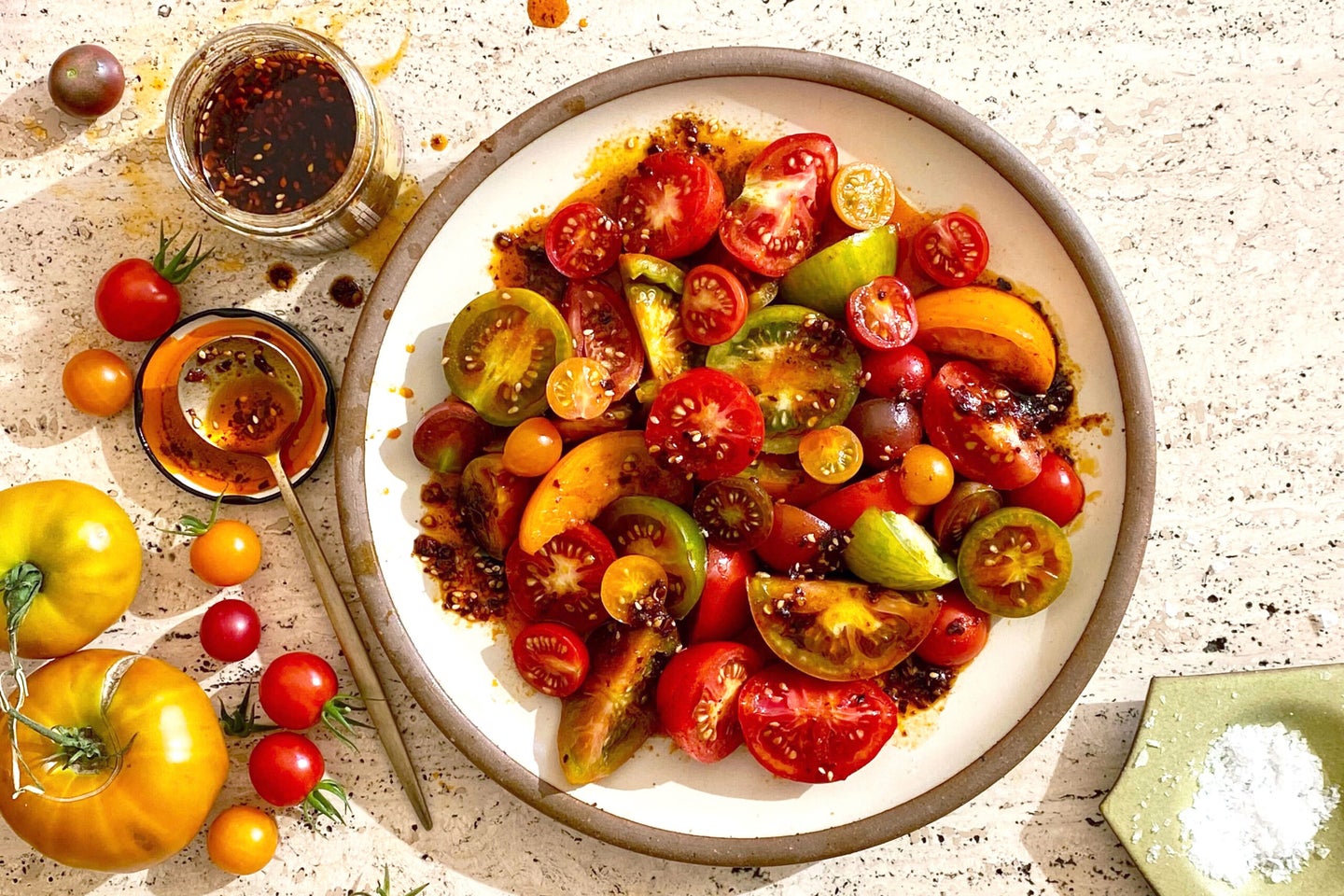 Last week, on yet another sweltering summer day in Paris, I was once again at the counter shoveling tomatoes drizzled with spicy, crunchy, garlicky chili crisp into my mouth. Sauce dripped freely back into the bowl, forming oily, crimson swirls. The habit began in the name of research: to taste-test the salad that the internet will not shut up about. But where did the tomato-chili crisp combo come from, and why was it suddenly all the rage?

Chili crisp reportedly arrived on the scene in 1997, when Tao Hubi, owner of a popular Guizhou province noodle shop in China, began selling her famed homemade chile sauce under the name Lao Gan Ma. While it’s unclear who first combined the condiment with fresh tomatoes, word of mouth and Google led me to Andy Baraghani, whose new cookbook, The Cook You Want To Be, includes a recipe for tomatoes slicked with homemade, Italian-inspired chili crisp.

“It’s a play on textures and temperatures,” Baraghani told me last week over the phone. “You have these cool, juicy tomatoes that are seasoned and acidic, and then you have a hot, savory, crunchy oil on top.”

While Baraghani’s salad calls for fennel seeds and cooked-down anchovies, many recipes making the social media rounds are paring things down to just two ingredients: tomatoes and a jar of store-bought chili crisp.

Jess Damuck, author of the bestselling cookbook Salad Freak (our current SAVEUR Cookbook Club pick), supports that less-is-more approach to the viral salad and said in an interview that chili crisp makes its way onto almost everything she’s eating these days.

Author and Roads & Kingdoms founder Matt Goulding sees tomatoes and chili crisp as a sandwich situation. He wrote in an email that he’s been drizzling chili crisp over thick slices of tomatoes with a generous layer of mayo on top of lightly toasted, crustless white bread.

All that mouth-watering research is how I got hooked on the tomato-chili crisp combo. Back in my kitchen, I quartered ripe tomatoes and added a splash of rice vinegar, a glug of oil, and a pinch of flaky salt. Next came a generous spoonful of chili crisp from my neighborhood Asian grocer, the perfect peppery garnish for the cool tomatoes. After a few bites, I threw in a few hunks of leftover mozzarella di bufala and spooned on even more chili crisp. And that’s the beauty of the salad of the summer—it is whatever you make of it.