On Fruitcake and Family

For a Jamaican baker living in Toronto, this spice-filled Christmas recipe is a precious and potent heirloom. 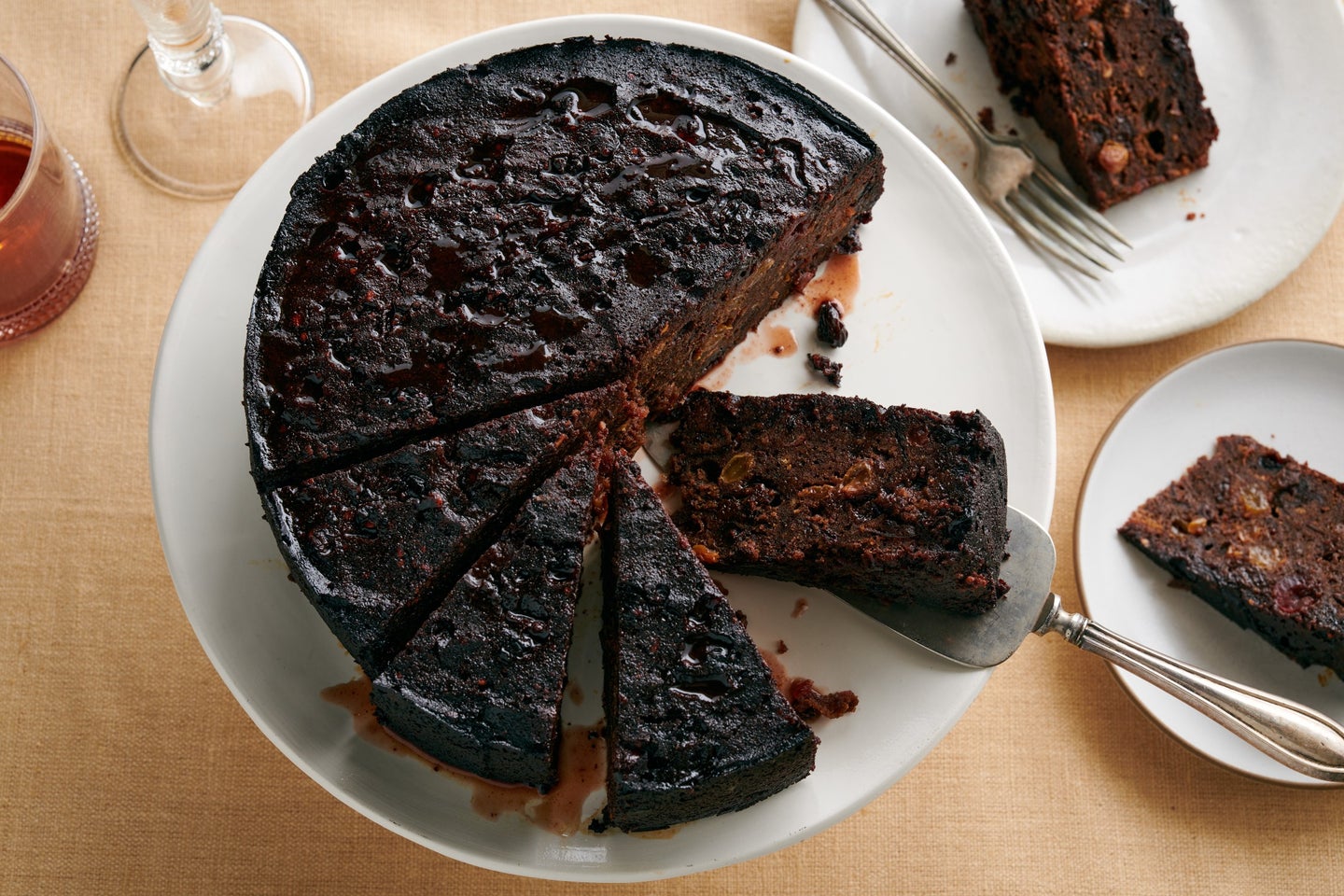 When I left home for college almost 20 years ago, I stole my mother’s recipe book. I was moving from Jamaica to Canada, the first time I’d be away from my parents for more than a summer. I knew her recipes would warm me on the northern winter days and bring comfort whenever I felt homesick. Mom’s Steno pad, circa 1968, is filled with handwritten recipes that she learned either in home-ec class, from her mother, or by watching televised cooking shows. In the margins she has written her own hacks, substitutions, and addenda. Each recipe, from the lime-rice pudding to cornmeal pancakes to the boozy steamed Jamaican Christmas cake, had been repeatedly tested and family-approved.

When she told me the book was missing, I feigned incredulity. “But where could it have gone? You know how things in that house love to grow legs!” Then, one summer, when she visited me in Toronto, she found it and, without a word, took it back with her to Jamaica. When I discovered it had gone missing, I just smiled. (Fair play, Mom, fair play.)  This began a years-long tug-of-war—each of us stealing the book back whenever we visited one another.

A friend who is privy to this decades-long battle once asked me: “Why don’t you just scan it?” He missed the point. You see, there’s something about holding that vanilla extract-stained, moth-eaten book that connects me to my college-aged mother. These are recipes that wooed my father, who is also a fantastic cook. Stories of mother’s college days are fascinating to me. She and her roommates had an “illegal” hotplate and made delicious meals that they would eat while sewing dresses for the weekly Friday night social. I had no such college experience but each time I opened the book, I felt that I did. But above all, amongst the pages turned sepia from time and use, I come back again and again to her Christmas Cake.

Caribbean Christmas Cake (also called black cake for its dark-as-pitch hue) is integral to how folks in the region celebrate the winter holidays. It’s not Christmas without this rich pastry, redolent with rum, molasses, fruit, and spice. Dizzyingly expensive to prepare, it appears only at the most special of occasions—mainly holidays and weddings. A New York Times article extolling its virtue described the act of giving a slice, much less a whole cake, as “a deeply affectionate gesture.” I couldn’t agree more.

To fully appreciate why black cake is so revered in the Caribbean, we can look as far back as ancient Rome, where the first known fruitcake recipe appeared over 2,000 years ago.  Containing pomegranate seeds, pine nuts, and barley, this sturdy loaf was used as sustenance—the original energy bar, if you will. Towards the end of the Middle Ages, yeasted and wheat-based “fruited breads,” like today’s panettone, panforte, and stollen, enjoyed increasing popularity in Europe. By the mid-1400s, the ancient cake had successfully traversed the English Channel and the British began making their own steamed version, plum pudding.

By the 1620s, the British had begun to occupy the Caribbean, using islands like Saint Chistopher (now Saint Kitts), Barbados, and eventually Jamaica as strategic military bases and essential outposts in the era’s brutal Transatlantic slave trade. Enslaved cooks were expected to replicate the recipe using whichever ingredients were available. There were no apples, brandy, whisky, apricots, or pomegranates in the region, but what they did have was African ingenuity, molasses, sugar, spices, dried fruit like raisins and prunes, and barrels of rum. What these cooks made exceeded the plantocracy’s expectations; through the slave trade, this new black cake recipe spread like wildfire throughout the Dutch-, French-, and Spanish-speaking Caribbean.

In the same way that curries differ in South Asian households, black cake recipes vary across the Caribbean diaspora. Some are made almost entirely of dried fruit, while some have just a smattering; others fall somewhere in the middle. Just about every Jamaican who bakes claims to have the best black cake recipe. Mine has won two local baking competitions, so I feel particularly justified in holding that belief!
Some folks (including my mom) like to stew their dried fruit in fortified wine and rum before aging it for a full year. I, ever the hack-loving, time-crunched millennial, believe in boiling the fruit in an array of alcohols, then letting it sit overnight before using. (You thought I’d say use it as soon as it’s cool? Never! I’m just lazy, not barbaric.)

The author with his mom, Cylda during one of the infamous summers when she reclaimed her recipe book. Courtesy of Vaughn Stafford Gray

Mom concedes that my cake has a better flavor, but that hers has a superior texture. That’s because she adds ground peanuts and breadcrumbs to her batter. Why didn’t I know this for almost two decades, you ask? It turns out the page with these secret ingredients had been ripped out and tucked in the middle of one of her college textbooks—fittingly, Caribbean Cookery. For the past three Christmases, I’ve merged our two recipes, and we’ve managed to create something even more spectacular.

Perfumed with overproof Jamaican rum, Guinness, brandy, creme de cassis, dry sherry, and a Jamaican fortified wine called Red Label, this boozy cake is not for kids. If you’re on a budget, which I certainly have been at different times over the years, you can still achieve a tasty black cake without the sherry and cassis. Though semi-steamed, the texture of this treat is not quite a cake, yet it is not as dense as a British-style steamed pudding either. When sliced, each portion should feather, like a quality cheesecake. The crumb should be delicate and the flavor robust.

Black cake is steeped in symbolism and history. Each bite is not just a carnival of flavor that commemorates Christmas in the Caribbean. It’s also a sweet reminder of the price our ancestors paid for our freedom. My family doesn’t have traditional heirlooms; other than some land, there’s nothing tangible left behind from my grandparents. Besides my parents’ wedding crystal and mahogany furniture, there’s nothing that I can expect to inherit. However, this Christmas cake recipe is a part of the Gray family legacy—something that I will carry in my heart. Just looking at the tattered cover of that Steno pad, I can hear our laughter, her jibing, and feel the hugs we shared as we waited for the cakes to bake. 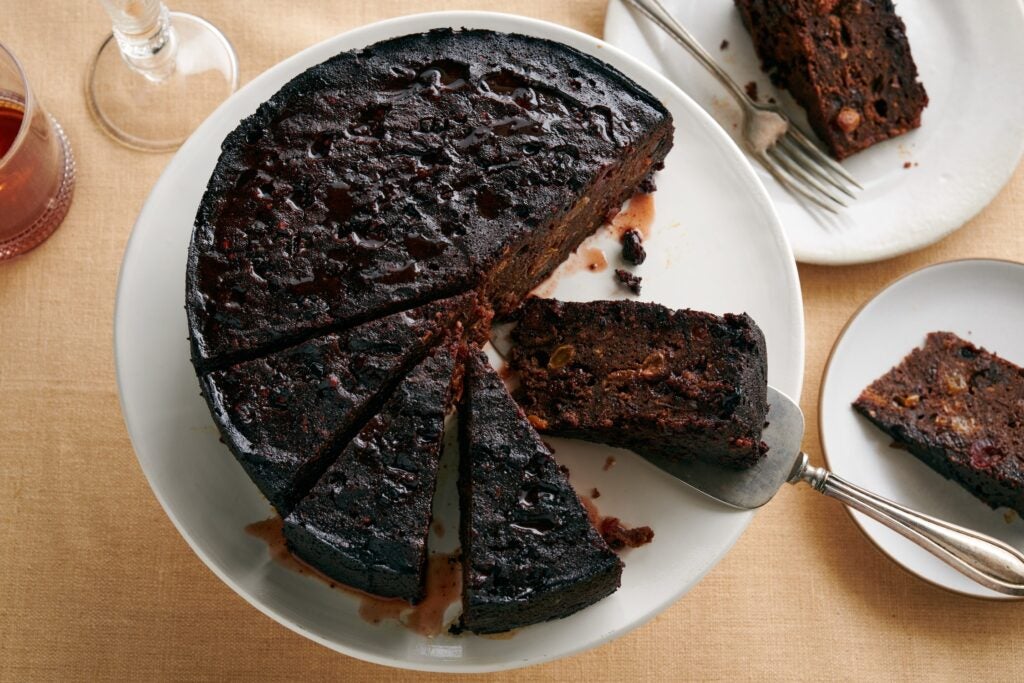