At an 18-acre coconut garden of Rockland Distilleries in Naththandiya, just north of Sri Lanka’s capital Colombo, Roy Jayalath begins his work early in the morning. Jayalath climbs tall, swaying coconut trees to collect the white, milky sap of their flowers. Balancing on two coir ropes, he walks across these tightropes from tree to tree until he collects enough sap to fill a pot. Coconut sap is the raw material for coconut arrack, an alcoholic beverage unique to Sri Lanka. Although this method of collecting sap, known as toddy tapping, has existed in Sri Lanka for about 2,000 years, arrack has only recently begun to reach trendy bars and foreign shores.

High-quality coconut arrack only has two ingredients: sap and water. When it’s fresh from the tree, the sap is sweet, tangy, and slightly spicy, with a strong fragrance of coconuts; it contains natural sugars and yeast, allowing the sap to naturally ferment into a wine-like drink called toddy, with an alcohol percentage of about 4 percent. A few hours after extraction, the alcohol content increases to about 7 percent. The toddy is then distilled like whiskey; the alcohol level goes up to about 60 percent, at which point the drink is then watered down to 40 percent and aged in Halmilla (a tree that grows in Asian tropics) wooden vats for at least three years before the liquid is bottled.

The garden employs six “toddy tappers” including Jayalath, now 56, who tapped his first toddy at the age of 13 after seeing his two uncles climbing coconut palms. Jayalath shimmies up the trees twice a day now: once in the morning to collect sap, and again later in the day to tap each tree’s unopened inflorescence, or cluster of flowers, with a mallet to stimulate toddy flow. He collects sap from 100 trees every day.

Rapti Dirckze, Head of Conservation at Rockland Distilleries, explains that toddy tapping is a generational craft passed down from father to son, but notes that it’s difficult to find young tappers today—despite the fact that a skilled tapper can earn decent pay of about 120,000 rupees ($470) a month. “People think it’s a job with low status, so the young generation wants to find other jobs,” she says.

Jayalath’s children, for instance, have moved into other labor work, he explains as he presses his palms together and says a prayer before ascending a tree. “[The prayer] keeps me safe,” he says, smiling. “The hardest part is to climb up. Most people think that walking on the rope is scary. Not for me. I’m used to it.”

There’s little evidence to suggest arrack’s origins, but according to oral history, centuries ago, toddy was given to elephants in the king’s army before battle. Robert Knox, a British sea captain who spent 19 years in Sri Lanka as a captive, wrote in his 1681-book An Historical Relation of the Island Ceylon that captives distilled arrack to drink.​​ In the mid-1600s, the Dutch began the commercial planting of coconut trees on the west coast of Sri Lanka and exported coconut arrack to Malaysia and several Indian destinations.

“We call this area the toddy belt of Sri Lanka,” says Dirckze, noting that this region extends from Chilaw in the north to Matara in the south. “The best toddy is from here.”

Sri Lanka has had a complicated relationship with arrack over the past few centuries. When the British took over Sri Lanka’s coastal belt in 1796, they seized control of the arrack trade. Arrack production slowly declined over the following decades. There were many reasons for this, writes Michelle Gunawardana in the book The Adventure of Arrack: not only did importing countries impose heavy duties, but the British East India Company also later banned the transport of arrack and discouraged imports into Britain. By the 1830s, the British had also tightened local production, ensuring that only licensed entities could produce and sell arrack. The British government later established the Department of Excise, which exists today, to control the illegal trade and allow only large-scale producers to produce the drink.

Around the ‘60s to ‘70s, when the coconut supply decreased due to severe droughts and labor shortages, some distilleries began to produce different arrack blends. Because these usually didn't include much coconut, they were much cheaper than traditional arrack. The prevalence of such alternatives labeled arrack as a cheaper drink for the masses, explains Dirckze.

In recent years, Sri Lanka has seen a resurgence of interest in coconut arrack, as mixologists around the world begin to champion this once overlooked spirit.

According to Nadira Jayasuriya, director of development at the Botanik Bistro & Bar in Colombo, local distilleries like Rockland are driving much of this surge, and customers are spreading the word on social media. She believes the growing enthusiasm is a sign that people are becoming increasingly interested in embracing native ingredients. “There’s a global trend to highlight everything local. The pandemic made it even clearer,” she says, explaining that COVID-related restrictions limited imports and drove people to pay more attention to locally available ingredients.

“Earlier, people wouldn’t come to a bar and order arrack, but now they do, even when we have whiskey or scotch on the menu,” says mixologist Dhanushka Dias, who developed the cocktail menu at ColomBar, an arrack-focused bar housed in Colombo’s Cinnamon Lakeside hotel.

Rockland now produces several coconut arrack varieties, including a new premium blend called Ceylon Arrack, which is a mix of 3-year, 7-year, and 10-year aged arracks. The taste is clean and smooth, with a robust coconut aroma.

One cocktail Dias developed is called Dodola, made with Ceylon Arrack, coconut milk, jaggery, nutmeg, and cardamom. The flavor is reminiscent of the popular Sri Lankan sweetmeat dodol. “When I told customers that I have arrack cocktails, they were reluctant,” he recalls. “But I was confident. And I was right. They loved it.”

Dias also created a cocktail called Padikkama, which tastes similar to bulath wita, a local betel-leaf-and-betel-nut mix commonly eaten after meals. Dias named the drink after the trays on which his grandparents would serve betel leaves—padikkama. “My idea was to develop cocktails with local elements, and when I thought of the days I spent with my grandparents, I wanted to recreate those flavors,” he says.

Another factor contributing to the increasing attention around coconut arrack is the growth of tourism. “When foreigners come here, they don’t want to sip a Scottish gin cocktail. They ask for something local, something that is ours,” Jayasuriya says. Botanik Rooftop Bistro & Bar serves two cocktails made with Ceylon Arrack, both featuring many locally sourced ingredients: one includes pandan, king coconuts, and kithul treacle (made with the sap of fishtail palm), while the other includes tamarind and passion fruit. “We had no idea how customers would react, but they are our bestsellers now,” he says.

Mixologist Nabeel Kenny, who works at the upmarket restaurant Monsoon Colombo, also sees the demand for arrack among tourists. “Customers ask us whether we have arrack cocktails,” says Kenny, who is now also developing arrack-based cocktails.

The popularity of arrack is no longer limited to Colombo or Sri Lanka. Coconut arrack is now a crowd favorite in London, where the ingredient is served in cocktails at trendy South Asian restaurants like Hoppers London and The Coconut Tree. Even celebrity bartender Ryan Chethiyawardene, who was brought up in Birmingham by his Sri Lankan parents, uses the spirit in mixed drinks.

“Arrack, one of the oldest and almost forgotten spirits from my homeland, has a very special place in our bar,” says Indika de Silva, owner of the cocktail bar Toddy Tapper in Germany. His hope is to offer a “cultural taste journey” with flavors and ingredients that are lesser known to the German crowd. One of the bar’s most popular cocktails is Jack & Jill, which features Ceylon Arrack, cardamom, jackfruit, and calamansi, among other ingredients.

Despite historical impediments, Sri Lankan distilleries and mixologists are reclaiming their pride in the centuries-old tradition of coconut arrack—and redefining it in innovative ways. “When someone says Mexico, people think of tequila. I want the world to think of coconut arrack when they hear the name Sri Lanka,” says Dias, “It’s our history and culture blended in one drink. We must celebrate it.” 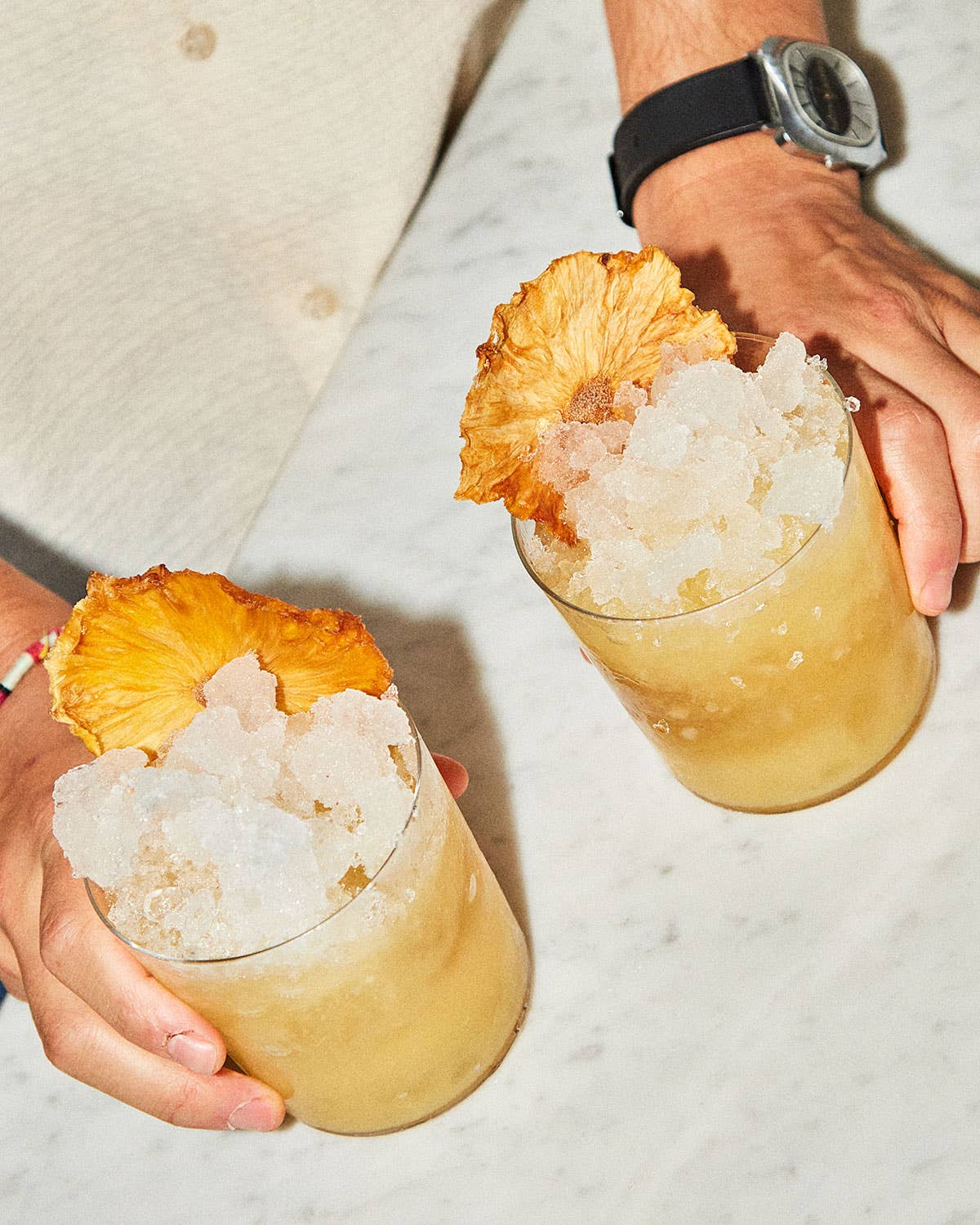