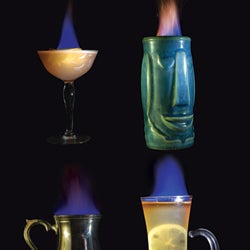 Legend has it that when President Ulysses S. Grant had his first Blue Blazer—a flaming whiskey toddy poured between cups in a pyrotechnic arc—he rewarded its inventor, Jerry Thomas, with a cigar from his own breast pocket. It was well deserved: Fire enhances aromatics, brings pleasing warmth, and caramelizes surface sugars, making the experience of sipping a cocktail all the more heady. While you’re unlikely to land a presidential commendation for flambeing drinks at home, what you will get is showstopping libations, such as these from bartender Brad Farran of Brooklyn’s Clover Club.

Named for the New Jersey birthplace of Laird’s Apple Brandy, this toddy gets bittersweet complexity from cardoon-flavored amaro. Blow out the burning bourbon that floats atop the drink, then stir it in. Get the recipe for Colts Neck Toddy » Todd Coleman

This twist on Jerry Thomas’s original uses overproof rum, a spirit with a high sugar content that, when burned, lends caramel depth to the drink. Get the recipe for Navy Blue Blazer » Todd Coleman

The flavors of ruby port and cognac grow even more profound when fired up in this orange juice-laced drink. Get the recipe for Gooney Goo-Goo » Todd Coleman

Grapefruit juice and cinnamon-infused syrup bring bright, spicy balance to the wallop of navy-strength gin, a variety with an extra-high alcohol content. Get the recipe for The Big Red » Todd Coleman